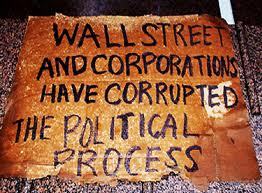 The 15-M movement began there last May 15. It wasn’t an occupation. It was a protest held in Puerta del Sol square over the economic crisis that became an overnight occupation. Then it was dismantled by authorities, then it turned into a see-saw conflict over whether they would stay or go. A month later, when they finally went, it was by choice. One veteran of 15-M (there are no leaders) said: “It was a strategic move that led to the survival of the movement.” Almost happenstantially they had evolved another preference: to fan out into districts of the city (and elsewhere in Spain) and conduct regular meetings with local residents. These then forwarded proposals to a weekly “assembly” held in the square.


While the public may focus on what is happening in the parks, the real battle has always been political. It has always been about generating support for progressive policies instead of the tired -- and obviously failed -- bromides  of the last thirty years. The solution lies in elections.

Paul Krugman, in today's New York Times, comes to the same conclusion. Instead of wringing their hands about the imminent failure of the Congressional Supercommittee, he writes, Americans should rejoice:

The gulf between our two major political parties is so wide. Republicans and Democrats don’t just have different priorities; they live in different intellectual and moral universes.


There can be no compromise when the gap between the parties is so wide:

Eventually, one side or the other of that divide will get the kind of popular mandate it needs to resolve our long-run budget issues. Until then, attempts to strike a Grand Bargain are fundamentally destructive. If the supercommittee fails, as expected, it will be time to celebrate.


We had an election in May. Canadians voted for more of the same -- except the majority of Canadians chose to stay home on election day.  If things are going to change, progressives have to do more than occupy the public square. Like old fashioned evangelists, they are going to have to use that square to spread the gospel  -- and toss the moneychangers out of the temple.
Posted by Owen Gray at 7:55 am