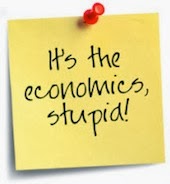 Last week, Jim Flaherty announced that Canada would run a surplus -- just in time for the 2015 election.  Scott Clark and Peter Devries suspect that Mr. Flaherty is playing with magic numbers. But, while Flaherty was trumpeting his projected surplus, Statscan released numbers that were far from magical. The Huffington Post reported that:

StatsCan’s latest numbers on Canada’s trade balance, released Thursday, look positive on the face of it: Exports and imports both grew, and Canada’s trade deficit with the world shrank by more than half, to $435 million.

But dig a little deeper into the data, and what you see is a story of two different export sectors. As BMO chief economist Doug Porter put it in a client note Friday morning, “there is energy (doing just fine) and there is everything else (doing anything but fine).”

While energy exports have seen a $63.6-billion surplus for the past 12 months, everything else has seen a $72.9-billion deficit.


The numbers are remarkable. The hallmark of a strong economy is diversification. But, during the Harper years, Canada has settled into an old nineteenth century pattern -- what Harold Innis called the "resource trap."

While resource extraction booms, manufacturing is on life support. Doug Porter notes that:

manufacturing employment in Canada — which is heavily dependent on exports — has shrunk by 20 per cent since 2000, even as jobs in the rest of the economy grew by a bit more than 20 per cent.

The result is regional disparities which could eventually tear the country apart. For Alberta and Saskatchewan, it is the best of times. For the rest of the country, it is the worst of times.

But, then, it became clear during the past week that the country is run by bobble heads.

Email ThisBlogThis!Share to TwitterShare to FacebookShare to Pinterest
Labels: The Resource Trap

Unfortunately, Owen, the propensity of most media to simply echo the false pronouncements of government about economic matters means that everything they say becomes 'fact.' As well, the divisive politics practised by the Harper cabal means that the rest of the country doesn't matter if appealing to his political base to retain power is the Prime minister's raison d'être.

It's interesting that Harper is returning to his political base, Lorne. His handling of the Senate scandal was predicated on the base. Flaherty made his economic announcement in Calgary.

It should be clear to anyone who is not a member of the base that Harper -- despite the label -- never was, nor is he now, a Conservative.