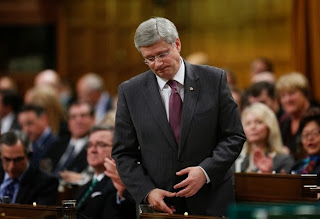 Stephen Harper has never been a man to admit a mistake. And now -- confronted by the biggest mistake of his political career -- he refuses to admit that the problem he faces is of his own making. Lawrence Martin writes:

In the face of Opposition Leader Thomas Mulcair’s heavy artillery, Mr. Harper has contradicted himself several times on aspects of the story. The Commons has never seen him squirm so much. But on the matter of not knowing how Mike Duffy’s expense claims were repaid, he has held firm and likely will continue to do so no matter how much evidence is adduced to the contrary.

He will hope his support holds in the same way that support for someone with worse problems, Toronto Mayor Rob Ford, appears to be holding. Mr. Ford has stuck to the line that he represents the average guy. He doesn’t. He’s an insult to the average guy. I suspect this will register before long and his support will unravel before long, as Mr. Harper’s likely will.


Mr. Harper has been extraordinarily lucky. He has never really had to pay for his mistakes. The problem is that he confuses luck with skill -- his own. Most of all, he refuses to recognize how he has destroyed his own credibility, now and in the future. Martin writes:

Now that the nature of the PMO operation has been laid bare in an RCMP report, a major problem arises for the Conservatives. If more controversies arise, how credible is the PMO’s word going to be? For example, if more incriminating evidence is forthcoming on electoral-fraud allegations related to the 2011 election, are people going to believe that no one from Mr. Harper’s inner sanctum knew or was involved?

The PMO has been trying to put the blame on one rogue operative, a kid named Michael Sona. With party lawyer Arthur Hamilton looking on, several Conservative staffers have given statements to an Elections Canada investigator alleging that Mr. Sona boasted about his robo-calls work. Last week, we learned that two staffers who gave some of the most damaging testimony said they had met with Mr. Sona during a certain time frame. We then learned from Mr. Sona’s travel records that he was on a beach in Aruba during that period.


Having succeeded several times before, he believes that denial will get him through this crisis. But -- as countless politicians before him have discovered -- when the people stop believing you, you're finished.

The MSM is finaly calling Harper basicly 'a lame duck' so his days are indeed numbered. In the west the old boys used to say "Give a calf enough rope and he'll hang himself everytime."

As was said in an other post "its all about perception" yes well since the MSM still controls allot of peoples thinking and the MSM is finaly 'onside' we just have to see if Harper bows out gracefully knowing that the fat lady has already sung, or kicking and screaming making an ass of himself the whole way out.

Me I'm betting on the latter with ultimately some crocodile tears thrown in at the final event for special theatrics for those still unsure. A feel sorry for me plea to try and gain a smidgen of respect from the unwashed masses.

I don't think he'll leave until someone of gravitas gives him a push, Mogs.

The question is, "Who, in the Conservative Party, has that kind of gravitas?"

.. thanks Owen .. and I came today via the Beaver.. who has linked Creekside & you in the 'Can You Hear Me Now' commentary ..

Reading your post, I'm thinking of a tweet from Stephen Lautens yesterday.. recalling the hero 'Dutch' from the film Predator. 'if it bleeds we can kill it' .. but just as in Orson Well's 'War of the Worlds' .. even the environment can dispose of you.. Watching Stephen Harper weakly and shrilly supervise his own disgrace is like the Wicked Witch of The West disintegrating

A simple pail of water.. and the meltdown is underway.

Not exemplars like Damien Gillis or David Schindler .. or recovering Afghan vets .. not inspiring artists, educators, explorers .. Nope.. its the tainted droogs, the secretive wanks, political animals, the enigmatic millionaires & dull entitled that like it or not.. are our media's heroes..

Thus Harper & his echo box cranks - MacDonald, Calandra, De Loray et al. And Conrad Black has his column & readership but not citizenship, Jason Kenney is quoted on anything but lives with mommy, Wente drones on, Flanagan is the 'full buffalo', Duffy rules.. and even retreat to full silence & invisibility a la Arthur Hamilton or Senator Gerstein or Nigel Wright & Benjamin Perrin stops the press.

To be hiding out, needing a spokesperson, the laughing stock.. a cheater or liar, the tainted, the butt of jokes.. is to be the so called leadership of this country right now... ?? So the bigger the credibility gap.. or the 'alleged' crime.. the more influential or in charge one is.. ?

If that's Law and Order .. or Transparency & Accountability .. this must be Kansas, Toto
Not Canada, Eh ..

Corrupt politicians seldom give up power voluntarily. This is simply because they know that things can unravel pretty fast if and when someone else, especially from the opposing political party, or even from his own party, comes in to clean up the rot.

I suspect that if Harper does step down before the election, it would only be because he is facing a criminal probe, not before.

And then it will only be because of great pressure from his own party/base as they try to salvage whatever they can before the next election.

We live in strange times salamander.
You can garner attention by being outrageous, instead of intelligent or wise.

And you can gain power by defining your enemies, instead of your ideals.

But enemies eventually catch up with each other -- and what ensues is what brings us all down.

I don't think Harper will leave willingly or happily, Anon. He will be pushed out -- and that will only happen when enough of his own people fear the consequences of having him around.

I believe we are headed for a Prime Minister using every escape clause in the book .. to retire to spend more time with his family ..
.. Offshore ..

The proviso being.. he gets to leave without being completely humiliated.. and some weird semblance of a 'legacy' is allowed to follow him out the door..

We're about to enter a new aspect of Canadian history & what's really neat to me.. incredibly refreshing .. is that its exceptional folks like you.. showing the way..

Canadian values.. are not Stephen Harper's values
That's clown talk.. empty words.. PMO crap
As if they speak for Newfoundland, or you.. or First Nations, BC elders, immigrant children, aged folk, or me, high schoolers, people of the deer, miners, artists or school teachers.. or fire fighters ..

The show is going down on the perfectly named 'Harper Government'.. the circus is folding its tents..

Harper et al are just fine with electoral fraud,
with spying via taxpayer dollars.. on Brazil,
on the Toronto G20 & on environmental advocates

Transparency? We can see right through you Stevie
Accountability ? We hear you evading ..betraying
Good government ? You're kidding.. right ? ??

I hope you're right, salamander. It's time the tent was folded.

I'm a little concerned, though, that things could get very ugly before the circus leaves town.

The push is on alright. Unfortunately what is being pushed is our perception of what is 'normal' and the baseline of acceptable conduct. The CONS point at the sponsorship scandal and claim that they are free of scandal whilst lowering the bar with each new omnibus bill.

Harper's & Ford's successors will now have a new low-point to refer to. How easy will it be to improve on the performance of those two clowns?!

Until there is a major shift in the way governments are chosen and held to account, there will continue to be fewer voters, more cynicism and further swirling waters as democracy is flushed into the abyss by the corporatocracy.

If the Harperites fan the flames of cynicism, we are in trouble, Feverish.

On the other hand, if they have managed to stir up a hornet's nest of anger, there is reason for hope.