"I Could Care Less" 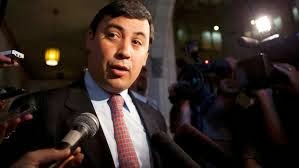 That was Stephen Harper's message to the Conservatives Halloween convention. This week -- after watching their western numbers drop, after refusing to call witnesses to testify to the Senate Committee looking into Mike Duffy's expenses, and after listening to Paul Calandra's absurd answers in question period -- it's obvious that the Harper Party could care less about the truth or parliamentary democracy.


How else to describe a strategy that systematically involves the government maniacally digging itself deeper in what is fast becoming a bottomless credibility hole?

With every innuendo-laced answer, Calandra leads the House of Commons — and his government along with it — further into La La Land.

Anecdotal evidence suggests that it is an approach that (understandably) inspires little confidence and even less enthusiasm within the ranks of the Conservative caucus.


It can’t just be the burden of having to sign hundreds of Christmas cards before the House rises for the holidays that accounts for the dejected body language of so many Conservative MPs as Calandra does his PMO-orchestrated song-and-dance.


Stephen Harper was found in contempt of parliament in 2011. Since then, there has been no change in his approach.  The man is contemptuous of everything and everybody. But the situation may change  -- and the impetus for that change may come from his own party. Conservative Michael Chong -- who resigned from Harper's cabinet when the prime minister declared that Quebec was "a nation within a nation"  -- is about to introduce a private members bill which would enable MP's to vote out their leader:

In the big picture of parliamentary democracy, that would be a positive development, for it is only by taking matters in their own hands that MPs will restore some much needed meaningfulness (and dignity) to their roles in the Commons.


It will be interesting to see how far Chong's bill gets -- and whether the Conservative caucus cares more than their leader does.

current circumstances and natural consequences may overtake the prehistoric anti democratic cave man from Leaside.. preoccupied with himself and enthralled by the adulation & idiocy of those dim bulbs similar to Paul Calandra..

And as Hunter S Thompson pointed out .. there is a downside.. during political disaster .. it can get worse..

Welcome to your own tailing ponds nighmare... that you had to drag all of Canada down into... it'll take decades to reverse the damage of your twisted narcissm.. the influence of Tom Flanagan and the complicity of your despicable coward caucus

Contrary to your statement, I believe that Harper and his party in fact could *not* care less, given that their level of caring is already rock bottom.

You know what gets me? MPs can already do that if they are willing to risk it, just make clear in caucus that unless the leader steps down (at least with a government/PM) you have sufficient votes to defeat the government and trigger an election. It means having courage and accepting that you have to risk losing your seats and government to do so, but if your leader is that bad then you need to do so in my books, and I would certainly suggest Harper fits that criteria. While this bill sounds good it seems to me more like a way for a sitting government to get rid of their leader without having to risk facing voters over it, which personally I find a bit of a covering of ones behind. This is one of those things I agree with Kady O'Malley about.

I agree, Mark. However, the statement is Harper's, not mine.

And, as Jack Layton said, he learned early that he couldn't take Harper at his word.

You're right, Scotian. Harper's heroine -- Margaret Thatcher -- was deposed in precisely that manner.

And, truth be told, I have doubts about whether there are enough Conservative votes to pass Chong's bill.

And that's the sad part, salamander. Even after Mr. Harper sinks into his own political tailing pond, it will take a long time to reverse his legacy.

What interests me, Owen, is how the Liberal and New Democrat leadership will respond to Chong's bill. We pray and hope that one of them will be our next prime minister, although that always remains in doubt. Will they agree to see the authoritarian privilege afforded party leaders expunged? If not, are they really just Shadow Harpers awaiting their turn?

This is their Come To Jesus Moment, Mound. If they don't support Chong's bill, they don't deserve our support.

It is true con M.P.s could make their position known in caucus, but if their aim is to make this much bigger, then Chong's way is the best way. It will get much more publicity, media coverage, etc. It will also force the other parties to either come on board or try to defeat it. Its a cross party issue. The bill maybe defeated but at least one person got up and said, its time.

In the past this type of legislation may not have been necessary, however, our system was not set up to deal with the likes of people such as stevie slime.

If Mr. Harper had any respect for centuries old parliamentary conventions, e.a.f, the legislation wouldn't be necessary.