Mr. Harper And The Judge 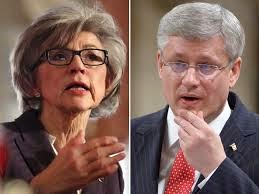 You can add Beverley McLachlin's name to Stephen Harper's Enemies List. In case your memory needs refreshing, Errol Mendes reviews some of the prominent names on that list:

The growing range of individuals that have had to endure such smears have included: academics (myself included); environmental groups labelled as extremists and radicals funded by foreign entities; public servants just doing their job, such as Linda Keen, the former head of the nuclear safety watchdog, Peter Tinsley, the head of the Military Police Complaints Commission and Richard Colvin, the foreign service officer who testified on the treatment of Afghan detainees; Chief Electoral Officer Marc Mayrand for alleged bias; and, astonishingly, former auditor general Sheila Fraser, who has faced innuendos of conflicts of interest.


If there is a common thread which ties all of these names together, it is contempt for expert opinion -- something that has been front and centre of late in the debate over the Fair Elections Act.

Ottawa lawyer Michael Spratt notes that it is not unusual to seek the chief Justice's advice on legal matters. She did not get into specifics. She was simply suggesting that Harper read the law:

Adam Dodek, vice-dean of the University of Ottawa law school and a constitutional scholar, says that there is nothing unusual about contact between the chief justice and the government: “Every minister of justice in this Conservative government and in its predecessor Liberal governments going back at least 15 years has stated publicly that they have consulted with the chief justice of Canada about appointments to the Supreme Court of Canada.”

Mr. Harper’s contention that contact with the chief justice would be inappropriate is simply not supportable and grossly misleading. At best, the prime minister is engaging in revisionist history of the worse kind.


But, then, Mr. Harper exists in a fact free universe. And, As Thomas Mulcair noted last week, "He always sees a conspiracy when someone tells him no."

Email ThisBlogThis!Share to TwitterShare to FacebookShare to Pinterest
Labels: McLachlin And Harper

Tom Flanagan has told us who we are dealing with, Lorne. As each day goes by, his diagnosis is confirmed.

That the Con caucus continues to blindly follow and support this obviously sick man for whom any criticism is considered a personal attack says as much about his colleagues as it does about the man.

It's a coalition of the bitter and the paranoid, Rural.

I assume this is supposed to play well to the "base" and caucus but, as I've said before, Harper shows a shocking lack of knowledge of the law (even for an economist!) and if he is relying on his Justice Minister (has "Airshow" ever practiced law?) well....

Harper obviously relies on others to read the law, Asking. And those "others" give him the answers he wants to hear.

He would never seek out a contrary opinion.

He took a swing at Sheila Fraser via Pierre Poilievre and got away with it, so he's just aiming higher.

He keeps going up the hierarchy, 131220. It's a classic strategy for removing all opposition.

It is astounding to me that, people just can't see through Harper? He has been a fascist dictator, right from day one. Harper doesn't govern, he dictates.

Harper as a dictator is paranoid as all dictators are. Harper's security bill has doubled.

Stalin, Hitler and Mussolini were all paranoid dictators and control freaks. All of them were quite mad.

The evidence keeps piling up, Anon.

How convoluted is that Owen? Harper would have made George Orwell very proud indeed.

Harper's communication strategy is taken directly from the pages of 1984, Mogs.

when a prime minister or president starts to critizise an go to war with the country's supreme court, you know you've got a problem. Canada we have a problem. Harper has much more in common with Putin than he realizes. Harper just can't start invading the U.S.A. to complete the picture. If you take Harper's actions and compare them to a list of say Putin's actions you will see similarities. The last bastion of democracy is usually a country's Supreme Court. If people can not find what they need there, the country will slide into riots and very unpleasant behaviour. When citizens have no redress and nothing left to loose, you have revolutions.