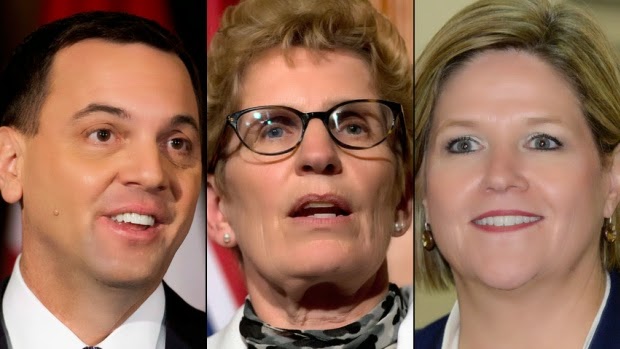 You would expect that Ontario's Liberals would be defeated in this election. After all, Tom Walkom writes:


The Liberals have been in power for 11 long years. They’ve presided over a host of scandals, ranging from the ORNGE air ambulance fiasco to the gas plant affair. The economy is just limping along.

Usually, a government burdened with this kind of baggage would be guaranteed defeat.

But Kathleen Wynne's party seems to be tied with or ahead of the Hudak Tories. Perhaps voters have looked at Mr. Hudak's plan and come to the conclusion that he is math challenged. Perhaps New Democrats have looked at Andrea Horwath's platform and decided they don't want to go there. For whatever reasons, the Liberals are not in the dog house. And that is why Hudak and Horwath have trained their sights on Wynne and made it personal:

Both Hudak and Horwath know that if they are to succeed, they must do more than attack the Liberal platform. They must brutally and deliberately bring Wynne down.


Expect more negative attacks. There will be no sunshine for the next two weeks.

Would the province expect an immediate resignation from Horvath should the abominable Hudak win? It seems absurd that she would attack Wynne and risk dumping that buffoon on the voters. From afar out here, she just does not seem to resonate with voters, not unlike her BC counter-part.If there's any lesson in this, don't trust the polls eh?

As of this morning, waterboy, the polls say it's a dead heat between Hudak and Wynne.

But as the BC and Alberta elections proved, we'll only know what really happened on the day after the election.