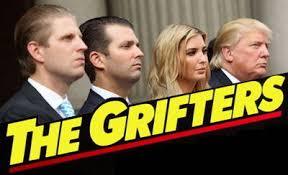 Donald Trump and his acolytes insist that "a vast left wing conspiracy" is trying to do the president in. Lawrence Martin writes:

That’s a frequent claim by Mr. Trump’s defenders, including former campaign operatives like David Bossie and Corey Lewandowski in their new book The President’s Enemies: How The Deep State is Undermining The Presidency.

The authors blame the old ruling class, as does Mr. Trump who, rather than pick up on George H.W. Bush’s example, is back to his old seething self. He issued a series of angry tweets on Friday morning, saying he’s the victim of some kind of liberal plot, and asking why the perpetrators haven’t been investigated.


But Robert Mueller plows ahead. And the facts keep piling up:

Mr. Trump received yet more bad news this week when Mr. Mueller told a judge that Michael Flynn, the President’s former national security adviser, has been in tight co-operation with his investigators. So tight, in fact, that Mr. Mueller is recommending that Mr. Flynn, who had extensive contacts with Russia during the 2016 campaign (and is not much of a deep-state enthusiast), get no prison time.

As a big-time squealer on the President, he joins Michael Cohen, Mr. Trump’s former long-time personal attorney and fixer. Mr. Cohen, who could hardly be called a deep-state member, once said he would “take a bullet” for Mr. Trump. Now he is firing them at him.

He recently admitted lying to Congress in 2017 in testifying about an aborted Trump Tower project in Moscow. He initially said negotiations with the Russians did not go on during the 2016 election campaign. Now he says they did. It could well be true, as Cohen associates have suggested, that he has bombshell information about ties between Mr. Trump and Russia.


The deep state isn't doing Trump in. It's his own people -- Trump insisted that they were "the best people" -- who will bring him down. Grifters operate in groups. And they will go down together.

Image: Daily Kos
Posted by Owen Gray at 9:36 am

I have read that Don Jr. is in rather immediate jeopardy, Owen, thanks to the Mueller investigation. I also read somewhere that it is quite lively Trump pere will readily abandon Trump fils if he can save himself. Amongst grifters, even blood-related ones, there is likely little honour.

I was contemplating this very thing, along with the prospect, however distant, of a real shake-up in France, perhaps in major parts of the EU as a whole, and almost immediately the Arab Spring and the Maidan came to mind. Situations that start out as true revolutions, as moves to vest political power in the people themselves are hollowed out by opportunists in whatever power group hiding out under a lack of a political structure, but existing, well-funded and capable of morphing into any identity by finding proxies in the crowd willing and capable of suborning the real direction of the political upheaval.

I thought Trump was doing a pretty good job of picking up on George H W Bush's example. He's certainly captured the blatant racism of the Willy Horton ad and is working hard to fill private prisons just as Pappy Bush did with his racist war on drugs.

Pappy was a master of fake news, with his Hill & Knowlton crafted story of Iraqi soldiers ripping infants from their incubators and the threat from Panama, which had a military smaller than the NYPD. But Trump has outdone the master in the fake news department.

And while in office, Pappy was a key player in training, supplying and supporting the right-wing death squads that have made Central America such a hellhole that families will walk a thousand miles to seek refuge. Trump, of course, wants to send them back where they came from.

And don't even get me started on Pappy's abuse of the presidential pardon to let his Iran-Contra buddies off the hook and shield himself from being held accountable for running that operation out of his office.

Finally, there is no better example of families grifting together than the Bush family. There was Pappy's dad Prescott Bush who financed German armsmaker Thyssen throughout WW2 and benefited from concentration camp labour. One of the Nuremburg judges thought he ought to have been hanged for treason. Then Pappy profited off the CIA using his company's oil rigs off the coast of Cuba to train insurgents. There was the family's involvement in the savings and loan scandal implicating Pappy, Jeb and Neil Bush. Bush family companies profited from both wars on Iraq. And Jeb's vote rigging in Florida eventually got his brother elected as the second most incompetent US president. The Trump family has a long way to go to match that, but they're working on it.

Thus the axiom, "There is no honour among thieves," Lorne. And these thieves are absolutely unapolegetic about what they do.

Seasoned opportunitsts realize that there can be profit in chaos, Danneau. Milton Friedman infamously made that case almost fifty years ago.

Strange, isn't it, Cap that those who rise to lead the Republican Party have such murky backgrounds?

And don't forget that it was Pappy's Saudi friends that were the only ones who were allowed up into USA skies on the morning of 911. They, of course, had just been meeting with Pappy in a fancy New York office when (mostly) Saudis were taking out the twin towers and thousands of innocent people.

Rumours were abound that it was the Saudis that were the Bush family financiers. At the end of the day, one wonders if there are any US politicians who don't have "dirty" fingers? Come to think of it... do we here in Canada as well? Certainly, we here in BC certainly have found some interesting connections to the BC Lieberals.

no its the "deep state". they forced all those good guys to make up false stories. trust me, that is what happened. just ask trump and his cabal. I expect that to be the next line dtrump uses because as you pointed out, its not others who are supplying the information, but dtrump's own people.

Its so toxic, dtrump can't find a new Chief of Staff. He might have been better off to not have "announced" Kelly's departure. From some American blogs it was noted the agreement was that Kelly would do his own announcing on this, but dtrump just couldn't control himself. So the question is, did dtrump piss Kelly off enough that he might speak to Mueller, if requested to

In the end it would not surprise me if all the dtrump kids and Jared went to jail and daddy floated free, thanks to the pardon Pence could give him, if dtrump resigns right before the end of his term.

It appears that integrity is in short supply, Lulymay. Most of our politicians seem to wear "For Sale" signs on their backs.

Jennifer Rubin -- wh write for The Washington Post -- has predicted that is exactly what will happen, e.a.f. And it seems utterly plausible.

.. I really only follow North American politics.. as what goes on here affects me and mine. Brexit ? Pfft.. I care not. Our forebearers sailed from Ireland past Newfoundland over two hundred years ago and I fail to see any purpose in the British monarchy. The Scots seem to have it together, Iceland aussi, the Dutch certainly. Europe overall puzzle me but only for fragments of a second. Asia I ponder mainly wondering at the vast populations, the dying soil, the shrinking aquifers. I know most of those folks will come here sooner or later. And many countries puzzle me by the neverending factional strife and murderous 'governments'

The United States however is reaching out for exalted idiot status.. its like rhey're all drunk or have lead poisoning down there. The whole Trumph shiteshow is like some twisted groundhog day episode of Dallas but with red ball caps, not cowboy hats.. like why don't they twirl towels too, like at an NFL football game. The bufoonery is nonstop. They have military personnel and hardware in 72 countries, there's submarines lurking in every ocean and aircraft carriers, frigates, cruisers.. you name it.. bombers and strike fighters overhead. Can anyone spell 'colonial' wannabe ? Hell, along with their bizzaro tv evangelistic industry, they have invented the fasted growing religion, mormanism. I mean they just pulled that out of their arse & found it good. Go Figure.

So more and more I figure politics and governance in North America is part diversion and part delusion. Pick essentially any core sector. manufacturing, mining, fisheries, education, lumber etc.. and imagine a successful business manned by bureaucrats replaced its owners or managers every four or eight years. How would that work out? Say it was a huge beef fsrm or a lumber mill or a trucking company.. and a thug who grifted at csrnivals and was somewhat adept as a pickpocket was picked to run the fsrm & hired only his bunnies and exotic dancers. How would that work out? Its a crude analogy, but how far is it from the reality?

In Canada eh.. we let a mail room clerk too smart for his britches, run the country. Our trust was rewarded with Electoral Fraud. There's a dose of illusion and delusion eh ? To ensure endless repeat performances, the likely suspects invented political clubs, called parties. Kind of like the Royal Benevolent Order of Moose.. but without the benevolence.. just lots of nasty infighting and a shortage of public service.. its more self serve for them. Open bar so to speak. So count me among the disillusioned, the appalled.. the angry. Just omagine having a creep like Poilievre or Tony Clement as your elected Honorable MP.. or Jason Kenney as your MPP in Alberta. Its laughable, its tragic, and its become stupidly absurd. These people are elected to represent us.. and they fail. Fire them. Stop payment on their paycheques and pensions. Rethink how we can do so much better.

@ Lulymay, right you are. And what was it that got bin Laden so worked up that he declared war on the US? It was Pappy getting US soldiers stationed in Saudi Arabia after he showed the royal family fake satellite photos of Iraqi troops massing on the Saudi border. Try as he might, Trump will never have as much blood on his hands as Pappy did.

All I want for Christmas in Robert Mueller's report.

Any rethink we do, sal, has to include electoral reform -- and we have a hard time getting there.

And Trump wants to burn it, Mound, because he knows -- in his own dull way -- that all the chickens have come home to roost.