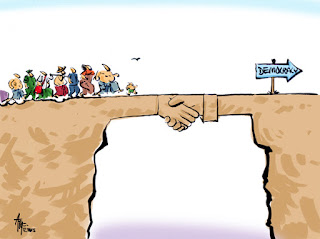 Robin Sears writes that the funeral for George Bush Sr. illustrated the difference between politics as bridge building and politics as a zero sum game:

George Bush, Brian Mulroney, Jack Layton, Justin Trudeau each understood the importance that bridge building means to successful party building, as campaigners. Donald Trump, Stephen Harper, Doug Ford are champions of a different, more 21st century politics. One that celebrates exclusion and identity over inclusion and solidarity. Recently, it appears that its champions are winning.

What Bush’s time in power — only four years — blazingly highlights is what you can achieve when you govern as a bridge-builder. Campaigning in kumbaya mode is easy. Governing by painful compromise is not. Justin Trudeau, sadly, demonstrates the difference, having slid back into partisan memes too easily when in power, having promised a more accommodating governing style on the stump.


If Justin governed as he campaigned, he might have accomplished more:

Imagine if the Trudeau government were going into this next campaign having stickhandled a compromise on electoral reform, had delivered on child care and pharmacare, and had actually achieved a broadly supported climate change agenda. They would have avoided the finger pointing fiasco of last week’s first ministers’ meeting and been virtually certain of a second majority in October.

Having chosen to play traditional partisan games on each of these files, that victory is less clear. Yes, Liberals can point out that the opposition was equally infantile in their resistance to compromise. But it is incumbent on the one who holds power to offer a hand of conciliation, of genuine commitment to compromise.


Andrew Scheer and Jagmeet Singh are also operating from a zero sum perspective:

Andrew Scheer and Jagmeet Singh each promised an inclusive politics in their leadership runs. Now Scheer has threatened to join the bridge-burners before the starter’s pistol for the next campaign, whining about the negative media he will need to battle. Singh’s wobbly launch has deflected attention from his inclusive leadership promise to bookmaking on his very survival.


The downside was that Bush's bridge making made him a one term president. But, in the end, leaders are remembered for what they did, not how long they served.

Image: The Irrawaddy
Posted by Owen Gray at 9:12 am

Email ThisBlogThis!Share to TwitterShare to FacebookShare to Pinterest
Labels: Two Kinds Of Politics

Why wouldn't Robin Sears be all in favour of inclusiveness, especially when it includes having Brian Mulroney as a major client: http://rabble.ca/blogs/bloggers/djclimenhaga/2012/10/rehabilitation-brian-mulroney-theres-reason-hes-looking-so-good-

Thanks for the link, Boreal. It's interesting to see how political consultants earn their livings when their parties are out of power. That said, I still think that Sears's point -- that politics is now more of a zero sum game -- is true.