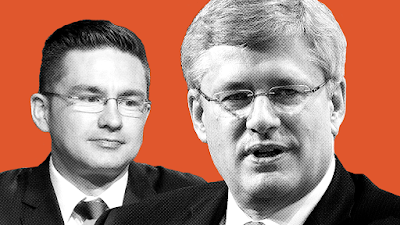 Michael Harris was never impressed with Stephen Harper. He is equally underwhelmed by the man following in Harper's footsteps -- Pierre Poilievre:

There were a lot of things wrong with Pierre Poilievre’s recent video on his bonkers drug policy.  And they go much deeper than a single issue.

For one thing, no public figure should use real human misery as the backdrop for a political pitch. If he insisted on doing so, how much better it would have been if he’d stayed a night in the tent city, and talked to the people who live there. That way, he could have told them how he would improve their lives, and perhaps gain a better understanding of their problems. Using them as props to peddle his snake oil was disgraceful.

Then there is the insidious implication of the communications strategy: airing his views in what amount to home-made political monologues. The people who have praised this as a new way of doing politics need to give their heads a shake. This is just Stephen Harper’s old, recycled idea of taking your message directly to the people, without the irritating filter of the media.

As prime minister, Harper even launched his own newscast—you guessed it—covering himself. By doing these monologues, Poilievre is doing exactly what Harper tried to do—deal out the media. You dispatch with questions and challenges. The principal benefit to the politician? You don’t have to explain these sermons from the ditch. Instead, the words mean what you say they mean. The bonus? Some low-information people might even believe you.

Harper came to power on the backs of low-information voters. Poilievre intends to do the same. But that strategy has obvious weaknesses:

So much of what he had to say was untrue. The person who understood this best is former adviser to prime minister Harper, Benjamin Perrin.

Now a law professor at the University of British Columbia, Perrin was outraged at Poilievre’s antics. With good reason. The former Supreme Court clerk knows a lot more about the matter at hand than Poilievre.  In 2020, the professor published a book on the subject, Overdose: Heartbreak and Hope in Canada’s Opioid Crisis. This is what Perrin told reporters about Poilievre’s video: “It was a five-minute long diatribe that’s not informed by any research evidence or expertise. It’s just Mr. Poilievre rehashing Conservative, war-on-drugs tropes that have been long since discredited and have been found to be not only ineffective, but costly and deadly.”

How far did Poilievre miss the strike zone with his drug pitch? Not just wildly but dangerously so, at least according to British Columbia’s mental health and addictions minister. Sheila Malcolmson, who deals with the reality of the opioid crisis on a daily basis, said this in a statement: “People hide their drug use due to stigma and shame—which is why the message the leader of the federal Conservative Party is perpetuating is dangerous.”

The video is an example of Poilievre’s crass attempt to score political points with his base, using the misery of addicts and their families.

In his monologue, he called safe injection sites, where addicts get clean drugs as a first step toward breaking their habit, a “failed experiment.” Nothing could be further from than the truth.

For the record, Stephen Harper was also opposed to safe injection sites for heroin addicts, and said so on the campaign trail during the CPC’s unsuccessful 2015 campaign. During that same election run, Harper defended his opposition to legalizing marijuana by saying that most Canadians agreed with him.  They did not.

Nonetheless, Poilievre insists on following in his master's footsteps. Canadians watched the Harper Show for ten years. I'm betting that they won't watch the sequel.

Harper came to power on the back of Liberal infighting and scandal (Adscam). Poilievre hopes to do the same. His problem is the lack of scandal. While the Cons hoped the Convoy and the Emergency Act inquiry would deliver one, that hasn't panned out. Meanwhile, anyone who followed Poilievre's cryptocurrency advice has paid dearly. As Harper liked to say, "he's just not ready."

The next Federal election feels like an eternity away, but as we've learned during covid, small bites of time also feel the same way, so who knows where Poillevre will end up. It's interesting though the similarities when you place their photos side by side, both smug facial expressions and a constant anti-Trudeau aura. Identifying a winning issue so far has not been his strength- most Canadians were appalled by the anti-tax "Truckers" and Crypto, a big face plant. Next up, Trudeau's fall from grace didn't materialize with the Emergencies Act Inquiry, and won't, no matter the outcome. What is becoming apparent is that Republican style politics will not fly here and constant Trudeau bashing is getting old. Time for a new strategy, or picking a new leader post 2025 and that field, is getting more desperate. Perhaps Danielle Smith will consider a run? We can only hope. BC Waterboy

Poilievre was hoping that Justice Rouleau would dispatch Justin, Cap. That was a miscalculation.

Poilievre is trying to copy the Trump playbook, waterboy. It appears that Canadians can identify a con man when they see one.

Pierre has quite a following among younger people who see Trudeau as a clown just as many older people do. The difference between these two segments is that older voters are more likely to be familiar with Pierre's act are less likely to fall for this version of it. The CRAP Party may have to try again a few years from now, and that may be after Alberta and Saskatchewan have seceded.

"Using them as props to peddle his snake oil was disgraceful."

Any issue can be discussed intelligently but our media prefer sloppy imagery. Someone blubbering into a microphone or camera does not add to the veracity of a story but listeners/viewers must like it because there's so much of it - the picture worth a thousand words nonsense. Personally, sobbing to cue leads me to change channels.

Life would be so much easier if both the young and the old knew a con man when they saw him, John.

It's all about choosing the sources of your information, Toby.

"It's all about choosing the sources of your information, Toby."

Agreed, Owen. CBC used to be my first choice for news. Unfortunately CBC has sunk badly over the past several years.

Sources don't always maintain the standards they used to be known for, Toby.