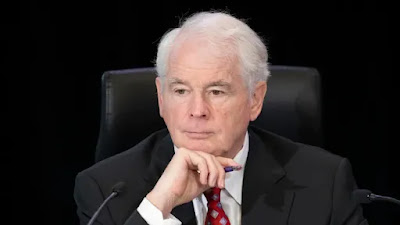 The Gomery Inquiry marked the beginning of the end of Jean Chretien's government. But, Chantal Hebert writes, Justin Trudeau's government will survive the Rouleau Inquiry:

A decade and a half ago, the publication of the findings of the inquiry into what was known as the federal sponsorship scandal signalled the beginning of the end of a dozen-year Liberal tenure.

Justice John Gomery’s final report — and the blame it apportioned to Jean Chrétien’s government — led to the defeat of his successor’s minority government and set the stage for a Conservative decade in power.

But the political parallels between that exercise and the ongoing inquiry into Prime Minister Justin Trudeau’s decision to use the Emergencies Act to deal with the blockades and anti-vax convoy that crippled the federal capital and the Canada/U.S. border last winter stop there.

Should Justice Paul Rouleau conclude in his final report that Trudeau failed to meet the legal threshold required to invoke the Emergencies Act, the prime minister’s minority government is unlikely to take a decisive hit over the issue.

For all intents and purposes, the case, it seems, is already closed in the minds of many Canadians and the popular verdict, notwithstanding Rouleau’s future conclusions, favours the ruling Liberals.

An Abacus poll published at the end of October showed majority support for the government’s decision in all provinces. The testimony heard since then was not, on its face, earth-shattering enough to reverse the trend.

And that's why Pierre Poilievre is keeping his mouth shut:

For their part, the Conservatives have been uncharacteristically discreet. That silence speaks for itself. Almost half of the Abacus respondents who self-identify as Conservative do not share the sympathies of the party’s latest leader, Pierre Poilievre, for the convoy and its members.

As Falstaff reminded us, "the better part of valor is discretion."

Email ThisBlogThis!Share to TwitterShare to FacebookShare to Pinterest
Labels: The Rouleau Inquiry

And that's why Pierre Poilievre is keeping his mouth shut:

One can only hope.

I suspect that Poilievre will have a hard time keeping his mouth shut, zoombats.

I think for most Canadians, Owen, the invocation of The Emergencies Act was a welcome relief from three weeks of inactivity by police. It might have been otherwise had violence or death resulted, but it seems to me that it was solved in a typically Canadian way, peacefully.

There was a big disconnect between those Republicans running for office and the voter in this past round of US electoring - overturning Roe vs Wade being the main one. I theorize that an organized group, such as the billionaire class led by Charles Koch is setting the agenda, the pols are doing their yapping on the hustings, but the majority of voters are firmly opposed.
Looking back to what Poilievre and Bergen said and did early this year during the convoys occupations, it is hard not to conclude they were marching to orders/suggestions that came from outside the CPC.
I think we have to keep alert for signs of outside influence to the CPC. And we must keep tabs on the CPC to look for signs of leadership roles within the party being occupied by Libertarian forces. DJF (that’s 2 days in a row; so I’ll shutup for a while.)

Let"s see. Pictures of Skippy delivering coffee to Convoy drivers and a few clips of him endorsing bitcoin should make interesting campaign materials for just about any party in Canada except for his own.

Of course, by the next election we may have more and better material. Spoiled by too much choice.

We still like to think of this country as The Peaceable Kingdom, Lorne. And, occasionally, we live up to our ideals.

I agree, DJF. The Libertarian wing of the Conservative Party is ascendant.

The Liberals will be successful. Justin has always struck me as being a "too easy" kind of guy. I just hope we don't see more of it.

DJF points to billionaire libertarian Charles Koch in particular, but it's important to remember where the Koch Brothers made their money - the oil and gas industry. If you want to understand the Freedom Convoy, you need to understand how the oil industry worked to create motivated citizens groups to fight carbon taxes.

The Conservative Party also opposes carbon taxes and is closely aligned with the political goals of Canada's oil and gas industry. In fact, its Reform Party predecessor was basically CAPP's political wing. The Emergency Act hearings never explored the guiding hand of the oil industry, and Skippy is keeping a low profile to keep it that way.

Had Paul Martin ignored the so-called ad-scam, perhaps we would've never been plagued by Harper.

It was an absurd act of pollical suicide, birthed in a petty jealousy.
Canada is diminished because of what it led to.

OTOH, I think Jr's testimony finished off any lingering doubts about the blessed EA and the end of the convoy. Thank god Jr left the drama-teacher guise behind and (for the first time since the 2015 election campaign) spoke with intelligence and clarity.

We can't ignore the role of the oil industry in right-wing politics, Cap. They'd burn the house -- or the planet -- down to get their way.

Watched for 50 years "the law" selectively applied.
This was no different.
Complicit, compliant selective buddy cops confused by the hard-on this convoy gave them, overlooking law after law after law.
Overstay one day in a camp ground and it's fees ,fines and towing.
Am I to believe that there wasn't a single law enforcement officer in Ottawa that was able to tell the difference between parking lot and roadway?
On day 3 a simple parking warning stating that on day 4 would be a $1000 parking ticket; day 5 would be $10,000; day 6 would be $25,000; day 7 would be contempt charges and confiscation of property as deemed abandoned or used in the attempted commission of an crime.
The emergency wasn't so much a bunch of unemployed broke ass truckers and admittedly every squirrelly Q anon conspiracist, quasi militant domestic terrorist promoting dissidents or discredited ex military or law enforcement instigators occupying roadways as it was a bunch of "law enforcement officers" on paid work to rule inactive duty.
Virtually any other "profession" that overlooked that many violations that they were employed to enforce for that many days with international coverage would be fired on the spot.
It wasn't about the barbarians at the gates, it was about mutiny in the ranks, staying on the fence while they waited for a winner.

The original failure was a local policing failure, lungta. That meant that the problem had to be kicked upstairs.

I'm sure there will be better material, jrk.