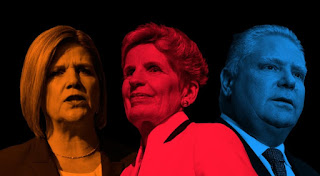 Last week, Bob Rae told a crowd of distinguished dignitaries, "Facts matter. Our politics needs to understand and respect this." Robin Sears wonders if Ontarians do understand this:

Like travelling medicine shows and revival preachers of old, their caravan booms noise and angry rhetoric but leaves little behind as it heads for the next town. A fact-free campaign of glaring contradiction can work for an established front runner with deep party roots and a following wind. That is not Doug Ford, nor this campaign. So far, he has promised nearly $30 billion in slashed taxes and expenditures – and, unacknowledged, thousands of job cuts as a result. Not even remotely clear is how this snake oil will work. Facts, apparently, do not matter.


It is, indeed, a strange election:

To some political veterans, 2018 feels like 1985 trending to 1990. For the ’85 campaign, the Tories made an unwise leadership selection to defend their 42-year governing record, opening the door to David Peterson and Rae. Then Peterson, spooked for no good reason other than his fear of a tanking economy, called an early election in 1990. Voters were not amused. As much as his own victory, Rae’s triumph was a rejection of the Tories and irritation with Peterson’s presumption.

Today, it appears the Tories would have won safely under either of the two women candidates they rejected in favour of vacuous populism. Having chosen the angry option, they have given credence to the Horwath taunt, “You don’t need to choose between bad and worse, there’s an alternative.” The NDP slate is the most gender-balanced but also the least experienced. Success outside the party’s areas of traditional strength will be almost entirely on Horwath’s coattails.

But leadership coat tails delivered all of the big election victories from Peterson through Rae, Harris and Wynne. The May 27 debate will be pivotal as grumpy voters, deciding what kind of change they really want, will get their last chance to see the leaders do battle. On the strength of the first two debates — one amateurish show in the first week and then the Northern debate — the Ford debate team should be working overtime.


And everything will hinge on turnout.

Image: City News Toronto
Posted by Owen Gray at 8:52 am

It's all rather disheartening, Mound.

Anybody would be better than Ford. But I hate having to frame my politics in terms of "anyone is better than. . . . " It's getting tiring isn't it.

Very tiring, Kirby. But it is an accurate evaluation of modern "conservatism." It's good to hear from you.