The Banana States of America 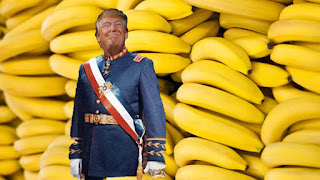 That's the phrase Dana Milbank uses to describe his country. It's not a dictatorship yet:

Right now the fear of the United States going totalitarian doesn’t feel quite right. This crowd is too clownish to be Stalinist.


Be that as it may, there are all kinds of signs that the United States is no longer a democracy:

The president, The Washington Post reports, personally urged the postmaster general to double the rate it charges Amazon, apparently because he doesn’t like the coverage by The Post, owned by Amazon founder Jeffrey P. Bezos.

Trump settles a trade dispute with China on terms even his allies say are too favorable to the Chinese. Meanwhile, the Financial Times reports that a Chinese state-owned bank asked clients to pay $150,000 to attend a fundraiser with Trump.


The government seems to respond to the president's whims -- even as it passes very little legislation.  The whims, however, are deeply disturbing:

Republicans on the Senate Judiciary Committee observe May 17, the 64th anniversary of the Brown v. Board of Education decision banning segregated schools, by debating the judicial nomination of Wendy Vitter, who refused to say whether Brown was properly decided.

Donald Trump Jr., The New York Times reports, met three months before the election with a representative of wealthy princes from Saudi Arabia and the United Arab Emirates who wanted to help his father’s campaign.


One day Trump will be gone. But, by the time he departs, the Republic may be gone, too.

I'm worried about the Banana State of Canada which is where we are presently heading.

When the corporations become the state, Toby, we're living in a banana republic.


From the get go it was predicted that Trump would go "extra-constitutional," a term that suggested authoritarian acts that were plainly outside the constitution. These are Trump's instincts honed from years of sketchy real estate deals. He sees something, he takes it and waits to see what happens. Another guy's wife, payment in full on a contract debt, executive power - it's all Trump at his feral best. Stalin used a bullet behind the ear but it was pretty much the same.

Speaking of Beria, have you noticed how Steve Bannon is making noise in Europe? I've been wondering if Bannon is trying to game Trump into bringing him back on board. Trump is feeling the heat. No one, especially Giuliani, is panning out. Bannon reversed Trump's fortunes once. Without him Hillary would have been in the White House. I'm sure Bannon figures he can find a political answer to Trump's deepening legal woes. Worth keeping an eye on.

I've read that Bannon is behind Trump's current strategy of trashing Mueller and the FBI, Mound. My impression is that Bannon and Trump are birds of a feather. Wherever they go, they wind up defiling the nest.

And he poisons every mind that's open to his suggestions.

One day Trump will be gone. But, by the time he departs, the Republic may be gone, too.

It's been gone a long time.

For the last 40 years we have been the frogs in the warming pot.

The issue is ; how long before we stand up and be counted?
How long before the first rock goes through the window of the "anointed" electoral candidate who no one knows???

Loved the picture! Canada is not a banana republic. The U.S.A. already is. The DOJ is no longer independent and the president is a liar. The republican party is too anxious to hang onto power to do anything to save their country. this is what happens when big business puts too much money into politics.

It will be interesting to see if any states try to leave the Union and with what results. will some of the eastern sea boards states declare independence and go their own way? Will California, Oregon, and Washington leave as a unit. California is the world's 6th largest economy.

People in Canada are unhappy about undocumented people arriving via the U.S.A. Wait until Americans start arriving here requesting political refugee status. Hey we didn't do badly when we accepted the American draft dodgers back in the day, so we and Mexico stand to gain.

Canada and Mexico might be better off to not sign NAFTA, and just do a two nation deal.

N. Korea is best not to sign a deal with the U.S.A. The U.S.A. can't be trusted. I expect them to make a deal with S. Korea, Japan, and China which other Asian countries and Australia will eventually sign. the u.s.A. WILL fade away, like the Roman Empire.

The longer Trump is allowed to hang around, TB, the more likely there will be a violent reaction to the man. If that happens, lots of things could go south. To avoid that outcome, the Democrats need to take control of congress.

North and South Korea can probably work things out, e.a.f. They'll do well to keep Trump out of their talks.