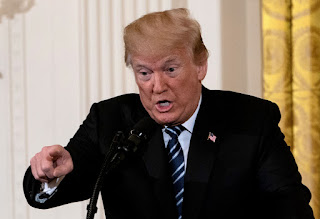 Because Donald Trump is who he is -- a man who operates on what Globe and Mail  columnist Lawrence Martin calls "a low information base" -- the United States is now facing a constitutional crisis. Eugene Robinson writes:

On Sunday, via Twitter, Trump demanded that the Justice Department concoct a transparently political investigation, with the aim of smearing veteran professionals at Justice and the FBI and also throwing mud at the previous administration. Trump’s only rational goal is casting doubt on the probe by special counsel Robert S. Mueller III, which appears to be closing in.

The pretext Trump seized on is the revelation that FBI source Stefan A. Halper made contact with three Trump campaign associates before the election as part of the FBI’s initial investigation into Russian meddling.

With the full-throated backing of right-wing media, Trump has described this person as a “spy” who was “implanted, for political purposes, into my campaign for president.” This claim is completely unsupported by the facts as we know them. Trump wants you to believe a lie.


As Robert Mueller closes in, Trump gets increasingly paranoid. The shadow of Richard Nixon looms large:

Now that the Mueller probe has bored into Trump’s inner circle — and federal authorities have raided the homes and office of his personal attorney, Michael Cohen — the president appears to be in a panic. The question is whether he sees this “spy” nonsense as a way to discredit Mueller’s eventual findings, or as a pretext for trying to end the investigation with a bloody purge akin to Richard Nixon’s “Saturday Night Massacre.”


The Justice Department has declared that the Inspector General will look into the matter. But Trump won't stop until he shuts down the Mueller inquiry -- or until the Congress shuts down Trump. In Nixon's day, there were Republicans who had backbones. These days, the Party is populated by invertebrates.

Trump's manufactured crisis is here -- and he may get away with it.

The innocent subject of the world's greatest witch-hunt sure does act like he's got something to hide.

.. if anyone knows the skeletons in Donald 'loser' Trump's closet.. its Donald.. as do his idiot sons re the skeletons in their closets.. but there's been a forensic expert with a flashlight. Robert Mueller & an expert group of forensic investigators poking about.

This is to a certain extent, an unprecedented investigation.. and the truth will out. When? We don't know. But I suspect Trump will negotiate to beat a retreat.. and Mike Pence takes over.. with his mealy envangelism barf talk.. Circle the wagons.. bluster baloney.. deny delay deny delay some more.

Looking for a single redeeming value in the GOP currently? Goodnight and good luck. This is a political party cesspool.. with a 'Royal Family' named Trump.. Authoritarian ? Trump is a loud mouthed fraudulent buffoon.. who was bailed out by Russian oligarchs.. and they hold his paper.. but hey, Americans swooned for his campaign.. as he beat out the other fake evangelical losers handily. Does the USA suffer mad hatter disease from lead poisoning? It does seem so. Nobel Prize ? Its to laugh.. but he will never do hard time for his crimes

History would suggest, Cap, that when presidents -- like Nixon and Clinton -- go full bore against the special prosecutor, they do, indeed, have something to hide.

I too doubt he'll ever do hard time, sal. We'll have to see if he's evicted from public housing.

I have a sinking feeling that a supine Republican Congress will bark to their master's command, Owen whatever the Trumpian call is. What would have been considered outrageous a generation ago is now business as usual in the Benighted States of America.

It's becoming clear that the sanctity of the office of the president is more important to America and Americans than the constitution. Thus does the republic die.

Unless the elections in November change the balance of power in Washington, Lorne, I'm afraid that Trump will get his way.

Benjamin Franklin famously told Americans that the Founding Fathers had given them "a republic -- if you can keep it," Deacon. We'll see if they can keep it.


One way or the other, America will never be the same again. There are many who believe Trump is the inevitable end product of a democracy that failed a long time ago. If it wasn't him it would be somebody else, perhaps even worse. America has spent the last half century rotting out from the inside. Its dysfunction is terminal. Either the country returns to its roots or it dies. Then again it is possible that, out of death, something may be reborn. That's not to say what follows would be better.

Trump personifies the lies that Americans have been told and have told themselves for decades, Mound. Until they confront those lies -- and their own credulity -- there will be no redemption.

Personally I think this is great! The FBI, the CIA, the neo-liberal, imperialist Democrats are all scum. Getting rid of Trump only brings us Pence as president.

I don't care if Trump loses though. Because he's odious.

What I love about this is that Trump will do so much damage to a rotten system as he goes down that it can't but help discredit everything in more and more people's eyes.

People talk about pushing the Democrats left as if that's even a remote possibility. It is not. That whole system has to be torn down and recreated.

That's Chris Hedges view, thwap. I also read that Bob Dole -- the former Republican candidate for president -- has said the same thing about the Republican Party.

The republicans won't shut down Trump. they want to cling to power at all costs. In the end they too will be eliminated because one person rule does not need a Congress.

The Republicans have made a Faustian bargain, e.a.f. Anyone who sells his or her soul lives long enough to regret it.