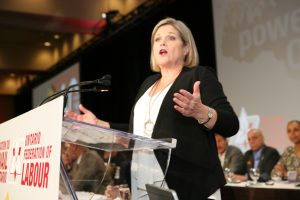 A funny thing happened on the way to the June 7 election. The voters discovered in New Democratic Party leader Andrea Horwath another alternative to Wynne.

What’s more, to so-called progressive voters, Horwath seemed to offer the best of both worlds.

Her party’s platform, with its commitment to pharmacare, child care and denticare was similar to that of Wynne. But Horwath herself was not a member of the discredited governing party.

In effect, she offered voters Liberalism without the Liberals.


Ontarians are tired of the Liberals. Their numbers aren't moving anywhere. But, while Horvath's numbers are rising, Doug Ford's numbers are falling -- because he avoids talking costs:

His broad economic plans, such as they are, reflect the standard Conservative trinity of tax cuts, spending cuts and deregulation.

He has fleshed out his proposed tax moves, which include a 1.5 percentage point cut in the corporate tax rate, a marginal cut in the small business tax rate, a cut in the personal income tax rate for middle and upper income earners and a reduction in gasoline taxes.

But he has not revealed how he plans to cut $5.6 billion in government spending without affecting jobs.


Ford is haunted by the ghost of Tim Hudak, who, the last time around, made a basic arithmetic error when projecting job growth. So Ford isn't talking job growth -- or job losses -- at all.

Having been conned once, Ontarians refuse to be conned again. And Ford knows it.

There are still two weeks to go. But Ontario may soon be the third province with an NDP government.

Image: The Ontario Federation Of Labour

If the NDP win in Ontario that means the 3 largest English speaking provinces will have NDP provincial governments, possible accounting for a majority of Canada's population.

An NDP government suits me just fine. Especially given the alternative of a Ford kakistocracy.

This is clearly shaping up to be a two-party race, Owen. Horwath is running a good campaign, unlike last time, and with so many seeking to send the Liberals into retirement, voters are indeed seeing her as Liberal minus the odium.


The planets are certainly aligning for Horwath.

I saw something reminiscent of this in the'74 federal election. Bob Stanfield, as fine a Tory as I've ever known, was running on wage & price controls. Trudeau opposed wage & price controls, getting on stage in his gunfighter pose and saying "zap, you're frozen." With that, the labour vote deserted the NDP and flocked to the Liberals as the last, best chance of stopping Stanfield. Trudeau prevailed, Stanfield went down to defeat and the NDP were wiped out, David Lewis even losing his own seat. A couple of months later Trudeau went on evening TV to announce that he'd thought it over and Canada needed wage and price controls after all. Voila, the Anti-Inflation Board.

This time it's the Liberals desperate to stop Ford and moving to Horwath's NDP. It's not payback but the dynamic is similar.

I noticed there were some unpublished comments, Mound. I clicked "Publish." Some of them came through; some of them didn't. Don't know what's going on. I hope this gets sorted out.

Perhaps the signal being sent is that the neo-liberal agenda is beginning to crumble, Gyor. Rachel Notley's government seems to be pretty blue, not orange. But the nosturms of the past thirty-five years don't seem to have the same staying power they used to have.

The latest seat projections suggest that Ford could still win a two seat majority, Cap. We'll have to see if Horvath has a little more momentum -- enough to get her over the finish line.

That's what's interesting, Lorne. Horvath has taken the Liberal platform and tweeked it a bit. It would aappear that the platform has legs. But it needs another saleswoman.

I agree with you about Stanfield, Mound. He represented the best of what used to be called The PROGRESSIVE Conservative Party.

"Horvath has taken the Liberal platform and tweeked it a bit. It would appear that the platform has legs. But it needs another saleswoman."

Where do you think the libs "tory lite" got their ideas in the first place?

Point well taken, DUDE. The Liberals have always had a talent for stealing their best selling ideas from other parties.