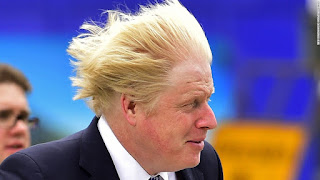 Last Thursday, Boris Johnson and his partner, Carrie Symonds, were involved in some kind of tiff. Mathew D'Ancona writes in The Guardian:

I have argued in the past that Johnson’s turbulent private life is a poor basis on which to attack him. One of the great improvements in British political culture in recent decades has been the decline of moral puritanism: after the fiasco of John Major’s “back to basics” strategy, a new and sensible consensus emerged that sexuality, infidelity and marital status are no long fair game in political conflict. But that shift does not represent a blank cheque. Yes, the police left Symonds’ flat satisfied that “there were no offences or concerns apparent to officers”. But the mere fact that the man poised to become prime minister in a few weeks was involved in an alarming altercation in which a neighbour felt it necessary to call police is self-evidently a legitimate matter for public inquiry.


This business is not about puritanism. It's about character. Actually, it's about two characters:

For the personality that Johnson has presented to the world is a confection, a stage act with roots in his true nature but with many affectations and contrivances. He is, one should never forget, “Al” (for Alexander) to his loved ones. “Boris” is a persona: it is his populist Conservative version of Ziggy Stardust, The Rock or Borat. It is a means to an end – and a potent one.

Indeed, it has become something close to a parlour game in the political and media class to chatter about “the two Borises” and wonder which is authentic. Which will we get in No 10: nice Dr Jekyll, the supposedly liberal Johnson who won the London mayoralty by posturing as a friend of immigration, diversity and pluralism? Or nasty Mr Hyde: the burqa-bashing populist who has led the charge for Brexit, says “fuck business” (and, presumably, the jobs that go with it) and treated the case of an imprisoned British-Iranian woman with indefensible sloppiness?


Given Johnson's long record of political schizophrenia, you would think that Conservatives, and Britons generally, would be paying close attention. After all -- whether it's Donald Trump in the United States, or Doug Ford in Ontario -- it should be clear that character is destiny.

Email ThisBlogThis!Share to TwitterShare to FacebookShare to Pinterest
Labels: Who Is Boris Johnson?

As an exBrit with some family over there still wondering where its all going to end all I can say that I have completely lost track of who is for or against what and even who all the players are, Owen. The whole brexit thing is IMHO an epic fiasco or perhaps better described as the biggest UK cluster fk in living memory, my adoptive country here in Canada is looking SO much better about now, for how much longer I am not sure!

Hey Owen. There is really something wrong with this picture isn't there. From Johnson, Trudeau, Trump, Ford and lest we forget Harper and Harris. It's all about shock politics and seems to fit hand in glove with all the fox news and right wing nut jobs fanning the flames. Boris Johnson is just another Eatonion prat that thinks he is superior to those who would elect him. When politicians lie, and we in Canada know something about this, they should be held accountable. BoJo has been caught out innumerable times and either jokes or slips into Latin to humour the press and humiliate those who would question him. I do believe that how one conducts ones personal life should come under scrutiny and that a twice known philanderer and verbal abuser of a partner should be transparent and could be paralleled by judgment with running the country.

This is not the behaviour we've come to expect from the Brits, Rural. It makes you wonder if there's an airborne virus over there.

I agree, zoombats. This is not a one off incident. It's a pattern of behaviour which is well established. There are red flags everywhere.

.. its top of mind to me.. CHARACTER.. here in the flatlands of Ontariario eh.. I stay well clear of Great Britain.. maintain zero opinionation.. My ancestors escaped Ireland long before the famine.. both sides, maternal and paternal.. met up on the prairies & southwestern Ontario.. all farmers essentially.. I had an uncle flew subhunters off the English coast, his younger bro, my dad mustered there as an underaged artillery gunner, mom seved in London encoding or decrypting secret stuff.. I stayed at and photographed The Savoy stem to stern inc the 18$ OJ for Fairmont Hotels & Resorts.. the Savoy bartenders were brilliant, so we flogged em hard every night after shooting was done... What would I do with a political opinion ? i love Monty Python tho..!

Show me a shred of CHARACTER to Doug Ford.. after his full body flop pratfall 'appointing' punk family friends of Dean French.. kerflips kerflops next day.. and insults all Ontarions as if we're stupids.. by pimping French's 'scheduled' resignation.. as all ring around the rosy cozy wonderful.. Character ? What CHARACTER ? Where ? Is it spray on ?

I won't mention the Trudeau character flaws.. Mound & Lorne and P & D took that low lying hill a ways back..

How bout multimillionaire Andrew Scheer ? Character ? Show me a shred.. I like the term 'a confection' re Boris.. I get that reference. Scheer to me is mustard flavor candy floss in a paper cup. Even a 5 year old would spit it out.. Jason Kenney is rancid roast beef.. political ptomain.. poison.. sad days in Alberta .. whew, the stench of Michael Cooper !!

Its the era of Potemkin Villages.. our cardboard cutout 'public servants' wave gaily from the sterile riverbanks.. to the cameras.. not to us.. who pay them.. Show me the Character !! It a rare thing !!!

It's rare, indeed, sal. And I'm not quite sure why. Perhaps it has something to do with privilege.

Yes, the stench of Michael Cooper!! CBC is the only major news media that is covering this smarmy little fellow and nobody I know looks at CBC. The "goat herder cultures" quote from 2008 is not mentioned on CTV, Global or any Postmedia papers. Cons own the media.

I get the impression that -- outside of Britain -- Johnson is an unknown, Rob. I expect that he will soon be well known -- and infamous.

Above all they’re performers. Seriously.

I had no idea that this guy what’s-‘is-name was such a flake, but I guess that’s pretty common these days among the characters who feel qualified to lead us. All it takes is being “electable” by an electorate unconcerned that what they’re watching is more than just a bad movie. As always, by their successes more is said about us than the performers. We should have taken Andy Kaufman more seriously.

I remember attending a couple of years ago a local meeting that hosted a contender for the leadership of one of our federal parties. In his speech the guest remarked of Justin to this effect: ”He may know or understand very little, but you have to take him seriously because he’s a great campaigner.” That’s serious business.

It's all about salsdmanship, John. But, as Willy Loman proved long ago, salesmen often aren't up to their self generated hype.