The Emperor Of Toronto 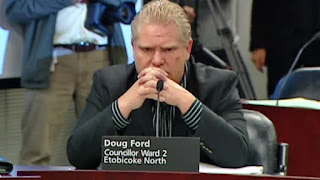 Doug Ford was elected premier of Ontario. But, Tom Walkom writes, he really wants to be Emperor of Toronto:

Ford’s fascination with Toronto is not new. It revealed itself immediately after the election last year that saw his Progressive Conservatives take power at Queen’s Park. That’s when, out of the blue, he decided to dramatically cut back the size of Toronto’s city council.

Was he settling scores? Was he fulfilling a downsizing dream that had eluded him when he and his brother Rob were members of that council? Who knows his motive?

The point is that the new premier of Ontario saw this bit of Toronto-centric localism as a top priority. He was even prepared to override the constitution’s charter of rights and freedoms in order to ensure the cuts were made.

Since then, Ford’s focus on Toronto has continued unabated.

He has trashed the city’s latest public transit plan, reached after years of agonizing to and fro. In its stead is a brand new Ford plan.

Did the city want one midway stop on its proposed Scarborough subway line? Phooey. Ford would have three.

Did the city have plans for a so-called relief line to ease the pressure on existing subway routes? Forget that. Ford would replace it with a so-called Ontario Line, running from Ontario Place on the lakeshore to the Ontario Science Centre in the city’s northeast.


Ford has just declared that he will decide how Toronto will develop in the future:

He routinely overturns decisions reached by the city’s elected mayor and councillors.

No detail of city business is too insignificant to dissuade his involvement.

His government’s decision to override the city’s development plans for two discrete areas of Toronto is perhaps the most extreme example. In effect, the provincial government is involving itself in the nitty-gritty of zoning.


He's a big man with many petty scores to settle. And he's doing his home town no favours.

Email ThisBlogThis!Share to TwitterShare to FacebookShare to Pinterest
Labels: Ford And Toronto

Dare I say it, Owen? The emperor has no clothes.

He's one of a few such emperors these days, Lorne. And it's remarkable how unashamed he is -- as his attempt to compare himself to Tommy Douglas makes painfully clear.

David Climenhaga has an interesting theory. "If it seems as if Canada’s Conservatives have lost it, guess again: They’ve just adopted the Trump playbook in its entirety"