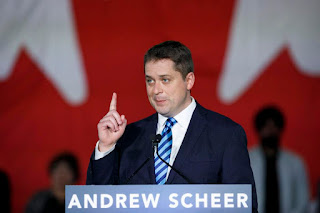 Justin Trudeau faces several issues which could doom his prime ministership. But so does Andrew Scheer. Penny Collenette writes that, with friends like Doug Ford and Jason Kenny, Scheer's quest for the brass ring could be doomed:

The Ontario premier has baggage already. He has unsurprisingly proven to be a political disaster. Voter’s remorse has set in. His polls are plummeting. Anonymous Conservatives are leaking their concerns to reporters and his caucus seems to be in a meltdown.

He and his team clearly did not learn a lesson from the Mike Harris government. When cuts hurt too deeply, people will scream in pain, especially when those cuts are aimed at the most vulnerable.

Scheer must find a way to distance himself from Ford while simultaneously retaining Ford Nation support.


And then there is Jason Kenney:

Meanwhile, Jason Kenney is a strategic lightning rod. Formerly a federal Conservative minister under Stephen Harper, the premier of Alberta is also causing trouble. Unlike Ford, Kenney and Scheer seemed joined at the hip on policies. However, speculation is mounting that Kenney is the federal “leader in waiting” which has to be slightly awkward for the two of them.

Scheer will also have to carefully monitor the Alberta premier’s actions. Kenney, Ford and four other premiers recently joined forces in an “urgent” letter to challenge Trudeau on two recent pieces of environmental legislation. They warned of a “unity crisis” if they did not get their way.

If there is any threat that makes Liberal hearts beat faster, it is a threat to “national unity.” The prime minister realized quickly the political gift. He immediately countered with an allegation that the premiers were being irresponsible to suggest a national unity crisis.


It's early days. And campaigns do make a difference. But, at this point, I wouldn't make any predictions about who will win the next election.

.. Scheer's problem .. is itself.. ie himself.. hardly complicated.. but inescapable
He's a giant wad of walking talking propaganda.. talking point or dogmatic miasma.. a blob.. a knob.. political parasite who 'beat' Bernier on a last gasp of the Harper Rump Remnants on a Hail Mary, Immaculate Interception13th ballot. To consider him 'a winner' one would have to be a loser.. That's the sea anchor reality he drags about.. while spouting & re-spewing in MainMedia.. another Harper spawned loser a la Jason Kenney, Doug Ford, Arthur Hamilton, Jenni Byrne, Peter McKay or the late saint & sellout, Harper zealot Jim Flaherty.. its tired, polluted, toxic.. If Scheer is 'the cutting edge' .. we need to revisit dysentry, diahorrhea & lower bowel inflammation syndrome as the new contemporary political 'leadership' sign

I think you're right, sal. Scheer is not a breath of fresh air. He's a new face. But the same ill wind blows from his direction.

.. maybe look at Andrew Scheer..
as Huckleberry Finn might ..

Much or many of Canadians might not 'get it' ...
yet its the reality .. 'old school' yes ..
but.. so is Shakespeare, the holy moly bible
Las Vegas odds, the World Series
cricket .. soccer hooligans, measles
or 'ladies of the night' & syphilis

'conservatism' died a ways back
Scheer is just a vestigial evangelical wart ..

That Trudeau is too thick to grasp it
is not my problem.. its Canada's problem
I'm just stuck in his baggage car
but I paid for a ticket.. you know.. eh !
A seat on the train to somewhere real
not to political petro dizzyland ..

Petroleum will eventually go the way of asbestos, sal. But it'll take awhile to get there. And, when we get there, it may be too late.