It's Always Been Hard To Find Them 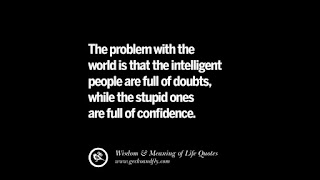 Peter Wehner offers a few thoughts this morning on the difficulty of governing. He writes in The New York Times:

In the late 18th century, Edmund Burke wrote to a friend and fellow member of Parliament that “every political question that I have ever known has had so much of the pro and con in it that nothing but the success could decide which proposition ought to have been adopted.”

Burke was right. It’s impossible to know the exact consequences once abstract ideas are imperfectly put into effect in the real world, which is untidy and unpredictable.


Many problems are devilishly complicated and we make decisions based on incomplete information:

Those in decision-making positions are often forced to make consequential judgments on incomplete information in a compressed period in an attempt to solve difficult and enduring problems. And the outcome of those decisions may well be determined by contingencies that are difficult to anticipate. That’s why it is important to look for leaders who not only have the right principles, but also discernment, wisdom and the ability to see around corners. And it’s important to keep our expectations realistic, because disillusionment begins with illusion-ment, which we should avoid.


These days, wisdom and discernment seem to be in short supply. But perhaps they always have been. I've been watching Ken Burns documentary on the Vietnam War. He makes clear that the war resulted from a fundamental misreading of a situation. The war began as a war of independence against a dying colonial system in Asia.

But the leaders of the day saw the war through perspective of the Cold War. It was a clash of civilizations -- between liberty and tyranny, good and evil. It went on for decades with a loss of life -- on all sides -- that was monstrous.

Image: Geckoandfly
Posted by Owen Gray at 9:26 am

Email ThisBlogThis!Share to TwitterShare to FacebookShare to Pinterest
Labels: The Difficulty Of Governing

I think the problem today, Owen, is exacerbated by the fact that some government leaders think they are the smartest people in the room. I suspect that the expertise and analyses rendered by a seasoned bureaucracy are often ignored in favour of a good sound bite or slogan. The Ontario Ford government comes immediately to mind in this regard.

Martin Regg Cohn has written that the Ford government has ignored expertise, Lorne, -- as has Mr. Trump. The stupid ones are full of confidence.

That's a good definition of wisdom, Mound -- "knowledge bonded to courage." These days there is little knowledge and little courage on display.