Racing Toward An Uninhabitable Planet 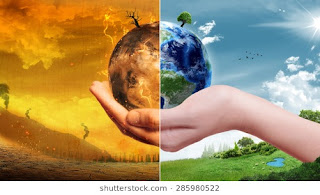 William Rees believes that the climate crisis could cause mass human extinction. He writes:

On Aug. 15, in a memorable session of the BBC’s HardTalk, [Roger] Hallam irritated multiple cultural nerves by claiming, on the basis of “hard science,” that six billion people will die as a result of climate change in coming decades.


There are lots of scientists who are as sceptical as Sachur:

One key to understanding these scientists’ rejections is their language. They assert that there is “no mainstream prediction” nor analysis in the “peer reviewed literature” that climate change will precipitate such catastrophic human mortality.

But keep in mind that scientists are reluctant, for professional reasons, to go far beyond the immediate data in formal publication. Moreover, organizations like the United Nations, including even its Intergovernmental Panel on Climate Change, are so dominated by economists’ concerns and bent by political considerations that extraneous noise obscures the scientific signal.


But, if you look at data on the human population explosion, Hallam's claim becomes quite believable:

When something is growing exponentially, it has a constant doubling time. For example, a population growing at two per cent a year will double every 35 years. Interestingly, the increase that occurs during any doubling period will be greater than the sum of the increases experienced in all previous doublings.

As the figure below shows, it took 200,000 years for the human population to reach its first billion in the early 1800s. In other words, population growth was essentially negligible for 99.95 of human history. But when sustained exponential growth kicked in, it took just 200 years — 1/1000th as much time — for the population to top 7.5 billion early in this century!


The same exponential math applies to the climate crisis:

As much as a decade ago a climate symposium organized to discuss the implications of a 4 C warmer world concluded, “Less than a billion people will survive.” Here [Hans Joachim] Schellnhuber is quoted as saying: “At 4 C Earth’s... carrying capacity estimates are below 1 billion people.” His words were echoed by professor Kevin Anderson of the U.K.’s Tyndall Centre for Climate Change: “Only about 10 per cent of the planet’s population would survive at 4 C.”

Similarly, in May of this year, Johan Rockström, current director of the Potsdam Institute opined that in a 4 C warmer world: “It’s difficult to see how we could accommodate a billion people or even half of that.... There will be a rich minority of people who survive with modern lifestyles, no doubt, but it will be a turbulent, conflict-ridden world.” Meanwhile, greenhouse gas concentrations are still increasing.

Keep in mind that a global temperature increase averaging 4 C means land temperatures would be 5.5 to 6 C warmer away from the coasts. Much of the tropics would be too hot for humans and many densely populated parts of the temperate zone would be desertified. A 4 C warmer world map suggests that as much as half the planet would become uninhabitable. (A ‘4 C world’ assumes business-as-usual or no new climate policies in coming decades. Note, however, that known and unknown ‘feedback’ mechanisms could make 4 C possible, even with new politically acceptable policies in place.)


We are racing -- blindly -- toward an uninhabitable planet.

I have to disagree with your final sentence, Owen. The fact is, we are racing -- with eyes wide open -- toward an uninhabitable planet.

A good point, Lorne. I should have been more discriminating. Some of us have our eyes wide open. Others of us -- particularly some of our leaders -- are acting like Sergeant Schultz.