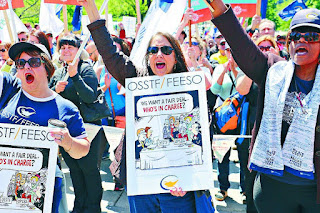 Today is the day that support staff in Ontario's schools begin work to rule. Doug Ford's mouth always gets him in trouble.  Martin Regg Cohn writes that, if Doug Ford were smart, he would have learned a lesson from past school strikes:

School strikes are the perennial conflict that bedevils premiers, as Ford’s predecessors can attest. We have seen this movie before, no matter the party in power.

Bob Rae’s NDP launched the prequel in the early 90s; Mike Harris and his Tories headlined the main event later that decade; Dalton McGuinty’s Liberals produced their own unhappy sequel in 2012.

Ahead of this year’s contract negotiations, the Tories have set the stage for confrontation:

The government announced a one per cent cap on all public sector pay raises; raised the student-teacher classroom ratio from 22 to 28 (an increase of 27 per cent in average class sizes over the next four years); and mandated four online courses for each high school student ⸺ an adventure in e-learning unmatched (and untested) across the continent.

The PCs argue that higher teacher-student ratios will be painless for union members, thanks to the magic of attrition. But that is small consolation for students left behind after those retired teachers are long gone.


For Ford, all of this has always been about numbers, not students. And Ford's numbers were wrong:

The stated reason for the higher class sizes, when announced earlier this year, was Ford’s claim that the budget deficit was out of control — after supposedly soaring to $15 billion for the 2018-19 fiscal year. Last month, the Tories acknowledged that the true deficit number was closer to $7.4 billion after all ⸺ less than half of the initial projection that served as the pretext for education cuts.

That inflated deficit scenario was also the impetus for a salary freeze of one per cent to be applied to all public servants. It is a recipe for unfairness that will only stoke confrontation.


All of this incompetence has led the Ontario Secondary School Teachers Federation -- of which I was a member -- to make their bargaining position public:

The OSSTF wants a return to last year’s class ratios; a pause on the unprecedented e-learning plan; and a cost-of-living increase tied to inflation, without any other salary hike.


Given the fact that there is no research to support Ford's e-learning plan, that seems like a pretty reasonable offer. But one wonders if Ford is smart enough to take it.

Image: The Toronto Star
Posted by Owen Gray at 9:00 am

.. no backing down ..
The problem with shrill & shallow partisans.. espcially who are elected and aquire mucho undeserved TV time.. is this. The have become very proficient at regurgitating their craftily designed talking points. Each has their own style so to speak.. but its the same Party Line' .. the same so called message.. or 'massage' as Marshall Mcluhan once told my late aunt during a business lunch. We see this phenomena currently, from many of Doug Ford's ilk ie Jason Kenney and Andrew Scheer et al.. their spokewanks, proxies, you name it.. even captured media are adroit at embodying the massage into 'the news'.

Thus we have Doug Ford - noted Education Expert.. among so many who grace the TV screens somehow but neglect to show up as the duly elected Government.. a summer holiday till after the Federal Election.

The problem is.. they don't like backing down.. plus.. they don't like to trot out the 'any many authorities and consultants' . they met with. They may as well say they sailed up The Volga River.. or consulted The Oracle.. or The Pope In Rome.

Do we think they will agree to meet 'on neutral ground' with actual identifiable Education Exemplars ? And even if they did.. they would bully glibly on with their locked in perceptions or ideology as memorized.. its their nature. It takes enormous effort and pressure from the Education sphere and the public.. you know.. the people with children in schools.. to get these asshats to step back.. or get real. To say its disappointing, even tragic.. well duh.. And its unrealistic to expect help from mainstream media .. they're into 'polls' .. or already sold out (hello PostMedia, Sun) TVO will step up .. and here and there CBC, CTV or Global.. as for newsprint. well, there's only one front page.. and lots of room to bury what are crucial issues.

It would be easy -- if embarrassing -- for Ford to say the numbers have changed, sal. But I'm not expecting him to do that.

The Con base expects their politicians to do two things: deliver tax cuts and pwn the libs. Teachers unions definitely fall within the Con definition of "libs." Ordinarily, the threat of a teachers strike would have Ford rubbing his hands with glee and braying about soshalizm. The problem is that he's been ordered to stay in his Foxhole until the election's over. Keeping his mouth shut must be killing him!

Now that OSSTF has made their bargaining position public, Owen, the modesty of their demands will, it is hoped, do an end-run around the Fordian vilification of 'union bosses' that will likely be part of the government's public relations strategy when bargaining falls apart.

He has already called union leaders "thugs," Lorne. You can see where this is going.


I wonder how many more years before this madness burns itself out and, when it does, what will we find in the ashes? Mike Harris showed the scars they inflict are deep and very hard to heal.

It wasn't that long ago that Harris took a wrecking ball to Ontario's public services, Mound. We have very short memories.

And what he has already said, is coming back to bite him, Cap. He said that Kathleen Wynne was involved in a criminal conspiracy when she covered up the deficit numbers. All of this will not help Mr. Scheer.

.. Scheer isn't exactly helping himself currently.. Ford's juvenile idiotic bumbling along seems essentially an election sideshow.. Kenney due in Ontario shortly.. Captain Glib himself. Can't believe Ford has been silent on Scheer's 'business career in the private sector..' as an Insurance Gopher .. perfectly apropos for a prairie lad from Ottawa. Now seems Scheer completed only one accreditation.. out of how many ? Ford could certainly help muddy the murky waters.. I have het to hear his opinion re the weekend protest of a protest at Church St and Front.. the Reverend or Pastor or whatever.. Flynn. What was the cost of that intense but neccessary police action.. ? Rumour has it Charles McVety funded the signs for the evangelical team vs the LGBT group. Perhaps Ford, Scheer or Kenney could comment too.. always nice to know what such glib male educational experts, 'pro-life' anti-gun control & climate change deniers think..

What they think is scripted, sal. And they're all reading from the same script.

I could tell you some interesting stories of my days in a different province whereby we were receiving hundreds of applications from Ontario policy and legislative folks who were desperate to escape "Mike the Knife" as they called him, was implementing his cut and paste policies.

Doug should have learned some lessons from Mike the Knife, Lulymay. Unfortunately, all of them went over Doug's head.