A Strange Marriage Of Convenience 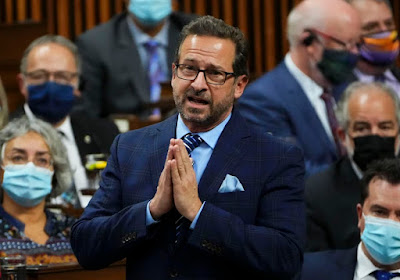 Parliament began with the same bickering between the major parties. Althea Raj writes:

On Monday, the Liberals sought to ensure focus remained on unvaccinated Conservative MPs — for reasons still unexplained, Erin O’Toole refuses to say how many of his MPs have medical exemptions from being vaccinated against COVID-19.

On Tuesday morning, Conservative finance critic Pierre Poilievre accused the Liberals of having an “inflation tax.” Inflation is at an 18-year high, and Canadians are feeling it at the gas pumps, at grocery stores and in the housing market. But Canada is not alone. It’s a problem shared by advanced economies around the world and exacerbated by choked global supply chains — although it is also true that the $300 billion or so the federal government has injected into the economy to soften the pandemic’s effects has contributed to the problem. Calling the result an “inflation tax” may be good branding, but it is deceitful.

On Tuesday afternoon, NDP Leader Jagmeet Singh lambasted the government over its throne speech, accusing it of having “run out of ideas,” and wouldn’t say whether his party would vote to support it. On Wednesday, Singh explained the reasons for his political manoeuvring: “I want it to be clear to the Liberals that they should not take our support for granted.”

But after the throne speech, "Bloc Leader Yves-François Blanchet was blunt with his remarks. The speech was vague, he said, but there was nothing in it to oppose. “How can we vote against apple pie?” he asked."

It will be a strange marriage of convenience:

Although Blanchet can be unpleasant, arrogant and condescending, he and the Bloc are often the sole authentic voices on Parliament Hill. Certainly, it helps that his party is not competing for power. For many Quebecers, the Bloc is a “none of the above” alternative on the ballot. But its mantra of being willing to work and negotiate with the government on anything that benefits Quebec, makes it a predictable partner, one focused on policy, and one that has been rather successful.

Sure, Blanchet can hit below the belt, as he did Wednesday in daring the prime minister to suggest that he would have been a better steward of the province’s health and long-term care systems than the government of Quebec.

Raj concludes -- correctly -- that the Liberals will remain in power with the help of the one party that doesn't want it.

Email ThisBlogThis!Share to TwitterShare to FacebookShare to Pinterest
Labels: The New Parliament

I can see the headlines now: Liberals collude with separatists to stay in power. Ah well, it worked for Harper.

Raj writes that the federal pandemic support contributed to inflation, as though this were fact and not speculation that she should have sourced. There are many possible contributing factors to global inflation but the case for government pandemic support seems thin when compared to widespread supply chain disruptions and pent up economic demand. There's another reason for inflation you won't see widely reported: corporate profit taking. Companies are using the reporting about inflation as cover to jack up prices and profits. Here's a brief explanation: https://mobile.twitter.com/MorePerfectUS/status/1463211390307549197?ref_src=twsrc%5Etfw

Paul Krugman writes that the argument that, when it comes to inflation, it's the 1970s all over again is bunk, Cap. There are several reasons for inflation. But history isn't repeating itself.

Jagmid says don't take us for granted but the NDP wants a lot of Liberal priorities passed into law. They won't vote against apple pie either.

Nobody wants an election, rumley. Somehow they'll work things out.