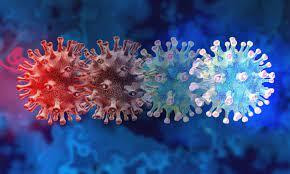 There is a new COVID variant. Bruce Arthur writes:

B.1.1.529, the newly named Omicron variant, was detected in South Africa but is already popping up all over; one case in Hong Kong travelled from Canada. It appears to outcompete Delta, which to this point had outcompeted everything else, which would mean it is our future. And scientists believe Omicron’s abnormal number of mutations could possibly reduce vaccine protection, though that is one of several important things that we don’t yet know.

And, he asks, what are we going to do about it?

Experts are frantically trying to discern just what the variant will do. It’s dispiriting, and a reminder of the hectic early days of this epochal pandemic. And it’s a reminder that the virus doesn’t get tired, even if we do.

“This is real,” says Dr. Peter Juni, the scientific director of Ontario’s independent volunteer science table, after reviewing the early genetic sequencing data out of South Africa. “This is not a blip. The only thing we know is it’s dominating Delta, and that in itself is troublesome enough.

“We’re not in peacetime right now.”

We cannot be complacent:

We have to presume it will arrive, and even if it’s only more transmissible that would mean a faster infection of the unvaccinated population, and into waning vaccine immunity. The federal government’s current requirement for pre-arrival testing and full vaccination makes sense: its travel ban is likely to be mostly theatre, and a more effective reinstitution of border quarantine may be necessary. We will find out how effective Canada’s border measures actually are, with one proviso: the variant will arrive.

“If there is a more transmissible variant, it’s coming. It’s going to happen,” says Dr. Isaac Bogoch, infectious diseases specialist at Toronto General Hospital and the University of Toronto who was part of a report late last year on federal border measures. “I think people think they have more control over the situation than they actually do.

“It doesn’t mean you don’t do anything, but it means you have to take meaningful action rather than performative action. You need to vaccinate like stink, better surveillance, enforced masking. Does this set the clock back to zero and it’s day one again? No.

It means we have to act collectively -- something a significant number of us have trouble doing.

Email ThisBlogThis!Share to TwitterShare to FacebookShare to Pinterest
Labels: Omicron

As you imply, Owen, we've seen this movie before. It never ends well.

We are our own worst enemies, Lorne.

Masking continues to be the single most effective way to reduce the spread of Covid. I'm glad that Ontario continues to mandate masks in indoor public places and that most people continue to abide by it.

However, public health professionals have been advising since the arrival of delta that we should now be wearing N95 or KN95 masks, not cheap surgical masks or cloth ones. This becomes even more necessary with the omicron variant. It would be nice to see Ontario Public Health draw more attention to this advice.

Someone smarter than me said that with regards to COVID we're living in the worst possible world. Because of 1) idiot COVID deniers/anti-vaxxers & 2) Big Pharma's greed preventing most of the world getting vaccines, we have a large population that provides a safe haven for the virus, where the it can continue to spread, and then we have our vaccines and our half-assed masking/social distancing that the virus can "learn" to mutate against and thereby become more deadly.

We should have gone all-out like China did at almost the very beginning. Viruses don't care about politics. They're actually very simple. Their behaviour is entirely predictable.

COVID shows our incapacity to absorb reality. We want to believe that we can continue to do things the way we always have, whether in the face of a deadly virus or deadly global warming.

COVID is not going away, Cap. We are going to have to stringently follow public health advice.

Your conclusion is spot on, thwap. We cannot do as we have done. And we refuse to recognize that fact.

Clearly some of us do know what must be done or we would not reply to your blog. It is a matter of laws being enforced. Anyong

Some people believe that laws are for other people, Anyong -- but not for them.