The Winds Of Change 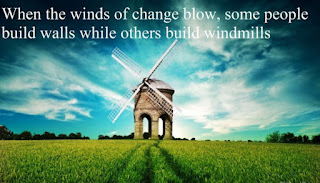 In Britain, the winds of change are blowing. Climate change has become an urgent issue. John Vidal writes:

The last few months have seen the debate shift. Put it down to David Attenborough’s documentary, 1.5 million children on school strike, the charisma of Greta Thunberg, or sheer frustration with the political system, but increasing numbers of people now seem to recognise that nature’s wellbeing is a national priority.

The UK government, keen to position itself as a world leader on climate, but still promoting flying and roads and less keen to act at home, recognises the moment. Cambridge development economist Sir Partha Dasgupta has been commissioned to conduct a major study on the case for acting on biodiversity, much as Lord Stern was asked to review the economics of climate change by Gordon Brown in 2006. Stern’s 700-page report added greatly to the debate. But that was 13 years ago, since which time there have been many highly authoritative studies done on environmental economics. No new report is needed. They all argue roughly the same: that it will cost infinitely more for governments to do nothing about biodiversity and climate than to act decisively, and that to delay will increase costs further. Dasgupta can only argue that we must act soon.


Politically, climate change has reached a critical mass. The evidence can only be ignored if politicians are dedicated to their own extinction. The same shift is happening in the European Union:

Belgium, Denmark, France, the Netherlands, Portugal, Spain and Sweden have asked the EU to set 2050 as a target for being carbon-neutral, and want 25% of the EU budget to go to fighting climate change. For the moment, governments have little to lose. Most consumers would barely notice the changes needed to get to carbon neutrality in 30 years’ time. Who noticed that Britain has just had the first week in more than 100 years of electricity without coal, or that divestment from fossil fuels has reached $8tn? People will have to buy electric cars, more efficient fridges and heating systems, and Britain will need vastly more solar capacity, bigger forests and better insulation, but these are mostly easy and popular changes.


In Canada, we're fighting over a carbon tax. In Ontario, the Ford government is blanketing the air waves with ads telling us how much the carbon tax will cost -- not mentioning anything about the tax rebate. And the government is dismantling wind farms.

Here, it's all hot air

Image: Medium
Posted by Owen Gray at 9:16 am

Ford's ads also don't mention the false economy of doing nothing on climate change. As the old Fram slogan said, "you can pay me now or you can pay me later." Meaning you can pay a little now for an oil change and new filter, or a lot later for an engine rebuild.

As always, conservative economic policy is to penny-pinch and kick costs down the road. That way they can blame future governments for paying more and raising taxes.

That's precisely where Ford is heading, Cap. Rather than paying now, he'll let others pay later -- when he's no longer in office.

They get away with it so many times as they kick those costs down the road because as a public we have scarce ability to assign accurately effect to cause. Could it be that this issue will the one that breaks through?

Naw. I’ve got to stop. I’m letting others’ optimism over recent bouts of activism and electoral developments get to me. That should wear off before I think I need to turn the air conditioning on.

Given past performance, John, skepticism is in order. But this is also a generational issue. As younger people vote -- and hopefully they will -- things could change.