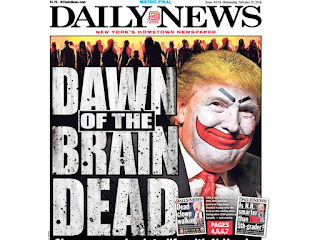 Donald Trump's naked disregard for the law has been a long time coming. Chris Hedges writes:

This decades-long disregard by the two major political parties for the rule of law and their distortion of government into a handmaiden for corporations set the stage for Donald Trump’s naked contempt for legality and accountability. It made inevitable our kakistocracy, rule by the worst or most unscrupulous (“kakistocracy” is derived from the Greek words kakistos, meaning worst, and kratos, meaning rule).

Those in the parade of imbeciles, grifters, con artists, conspiracy theorists, racists, Trump family members, charlatans, generals and Christian fascists, all of whom often see power as a way to enrich themselves at the expense of the taxpayer, are too many to list here. They include former Health and Human Services Secretary Tom Price, Ivanka Trump, Jared Kushner, Vice President Mike Pence, Treasury Secretary Steven Mnuchin, former Interior Secretary Ryan Zinke (who blamed “environmental terrorist groups” for the 2018 California wildfires, hired private jets to fly himself around the country and opened public lands for mineral and gas exploitation), former Environmental Protection Agency Administrator Scott Pruitt (who held lavish dinners with the coal-mining and chemical executives whose companies he then deregulated) and Senate Majority Leader Mitch McConnell. This moral swamp also contains bizarre, Svengali-like figures darting in and out of the shadows, such as Stephen Miller, Michael Flynn, Steve Bannon, Kellyanne Conway, Sarah Huckabee Sanders, Anthony “The Mooch” Scaramucci and Omarosa Manigault Newman, not to mention paid-off porn stars and mistresses, sleazy lawyers and bungling and corrupt campaign managers.

At the center of this clown court is Trump, who, if the rule of law was in place, would have been impeached on his first day in office for violating the Constitution’s emoluments clause; by violating that prohibition, this chief executive is raking in millions from officials of foreign governments and lobbyists who stay at his hotels and resorts and use his golf courses. Trump not only does not attempt to mask his profiting from his office but in corporate promotional material says that those who stay at his properties may be able to get a photo with the president of the United States. As illustrated by the Robert Mueller report and by Attorney General William Barr’s open contempt for Congress, Trump does not even bother to pay lip service to the requirements of the law or the Constitution.


What is going on in the United States goes far beyond Trump. But Trump is the incarnation of it all. And, if Americans fail to see that, they're doomed. Unfortunately, many other countries are also suffering at the hands of the Clown President.

Image: Medium
Posted by Owen Gray at 8:51 am

Email ThisBlogThis!Share to TwitterShare to FacebookShare to Pinterest
Labels: Trump's Naked Disregard For The Law

Hedges makes the point that Trump should have been impeached many months ago, but now what is on display is that the American system is a total failure for allowing it to go on this long. Elizabeth Warren really nails it when she courageously calls for impeachment when others shake in their boots. They really have nothing to lose at this point and the electorate really is deplorable (yes, Hillary was right about that) enough to give him a second term anyway. At least make him squirm a bit.

It appears that the only way the Dems will get the information they want is to open an impeachment inquiry, waterboy. Trump thinks that impeachment is his ticket to a second term. In the longer run it may be his ticket to the slammer.