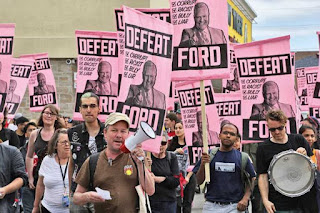 If you take a close look at Doug Ford's first budget, Martin Regg Cohn argues, you begin to understand how incompetent he and his government are:

By rejecting the bureaucracy’s best advice — dismissing the non-partisan professionals as know-nothings — Ontario’s self-styled “Government For the People” shortchanged the people. Now we are all paying the price for a budget built on a foundation of false assumptions.

On paper, the budget purports to spend a record $163.4-billion — a hefty $4.9 billion more than the last Liberal budget delivered some 12 months earlier.

But those additional billions are not all going toward front line services, nor allocated to future infrastructure. Social services, for example, will be cut by $892 million, reaching $1 billion the year after.

Instead, the money is being misallocated to a fiscal chimera, born of an obsession to redo the province’s books.

Controversial accounting changes would render worthless, for the first time, a hefty $11 billion surplus from a jointly-held pension plan long listed on the province’s books as an asset. By blowing a hole in the budget, the Tories suddenly displaced billions of dollars from regular spending that had to be found — and ultimately defunded — elsewhere.

A note in the government’s financial statements shows $2.7 billion added to the budget deficit in order to “provisionally adopt auditor general’s accounting treatment of pension expenses.” That’s a reference to auditor Bonnie Lysyk’s surprise demand that Ontario stop counting any such pension surplus as an asset — unless the fund fell into deficit (in which case, with utter inconsistency, she’d count it as a liability).

Under the last Liberal government, top civil servants had pushed back against Lysyk, noting that she and her predecessors had fully endorsed treating it as an asset since 2002 (not to be confused with raiding a pension fund, which remains illegal). Ultimately, the previous government heeded the advice of an outside panel of accounting experts who found Lysyk’s analysis fatally flawed — akin to claiming that merely because depreciation is an abstraction, it’s an imaginary number.

Interestingly, another panel appointed by the Tories landed on a similar actuarial analysis, noting that a pension surplus could not logically be worth nothing (as Lysyk had insisted). Yet in their zeal to dismiss and demonize anything that came before them, the PCs ignored all outside advice in adopting the auditor’s audacious demands.


And the damage will not just occur this year, it will be ongoing:

Another $2.4 billion in indebtedness was added to our budgetary burden, thanks to the auditor’s criticism of a 2017 hydro discount plan enacted by the Liberals under public pressure. Lysyk had argued the refinancing scheme would get lower interest rates if the borrowing went on the province’s books — underwritten by taxpayers rather than ratepayers (via OPG). Cheaper, but not fairer — henceforth the hydro bills of cottagers and affluent customers with outsized properties will be subsided by all Ontarians, rich or poor.

Another $1.5 billion in revenues were forfeited by the Tories in the last fiscal year after they killed the cap-and-trade program that required polluters to pay a price for carbon (with the proceeds going to transit investments and subsidies to schools and hospitals for energy retrofits). A further $308 million in scheduled tax increases were also cancelled.

Together, those tax and accounting changes add up to roughly $7 billion in recurring revenues that must be found elsewhere. Every year.


The Fordians did what conservatives have done for decades. They fled from expertise. Is it any wonder that Ford's support has crashed among Ontarians? They know incompetence when they see it.

Ford's incompetence and outright nastiness was widely and regularly reported while he was on Toronto city council. So people can't claim they thought they were voting for a competent leader.

Sadly, his nastiness appeals to some people, particularly when it's directed at people they despise - poor people, minorities, women, etc. So I have no sympathy for PC voters who regret their choice now that Ford's nastiness is hurting them too. What did you think you were getting when you voted in a party opposed to providing government services?

I am now beyond rational comment upon the Frord machinations Owen, which is perhaps exactly what the want as they destroy our Ontario economy

Lots of utterness is on display. Nothing that Doug has done nor his incompetence in doing it should come as a surprise. What utter thing can we call the 40.5% that gave him the okay to go ahead?

I’m wondering what wonderful things the Ontario Liberals have done to go from 19.6 to 39.9% while the NDP has dropped from 33.6 to 24.2% since the election. It’s too easy when you’re the hometown’s favourite go-to “naturals”, I guess. Maybe now that the “For-the-People” are realizing that Bill Davis left the building long ago, it’s time that somebody told the ones who aren’t aware that Bob Rae isn’t in the NDP anymore (as if he ever was). That might make a few more foreheads flatter.

I agree, Cap. Ford was a known quantity. What's surprizing is that he never costed out his program -- and voters let him get away with it.

They certainly don't want to be held accountable, Rural. But, then, for these folks it's always been somebody else's fault.

Ontarians still remember the Rae years, John. That's why the NDP did not win the last election.