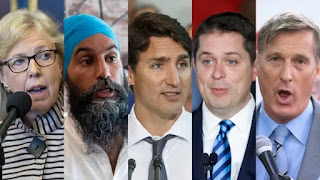 The election has arrived. And, Susan Delacourt writes, it will be all about our children:

Children can’t vote in this election, but they will loom large in the electoral conversation of all parties over the next six weeks.

Kids are evoked by politicians when they want to talk about the long-term future, and so much of the top issues in this campaign will be a struggle between long-term and short-term thinking. Is this election about what happens for the next few years or are voters making choices for future generations too?

Climate change, of course, will be one of those big issues. What was once a long-term concern — global warming and the future of the planet — has recently been sliding on to the short-term horizon. Last year’s report from the International Panel on Climate Change, warning that the world had only 12 years to get its act together to avert catastrophe, has prompted many politicians and voters to see the 2019 federal election as do-or-die for the environment. Certainly that is how it is being cast by Liberals, New Democrats and the Greens.


So climate change has finally moved centre stage. But money will also be in the centre ring:

Justin Trudeau’s Liberals will be accused over and over again, especially by Conservatives, of mortgaging the future of Canadian children with all the spending and debt saddled on future generations.

So on these two key policy debates — climate and debt — voters should be braced for a pitched battle over how dreadful a world Canadian kids are poised to inherit and what kind of reckless, short-term thinking created it.


Immigrants will be part of the debate. And, in the west, oil will certainly be on the agenda. How will it all shake out?

Given the pre-writ mudslide and the general tone of sniping and nastiness, as well as the media's perfect willingness to talk personality and polls to the detriment of substantial issues, I was considering sleeping until election eve, checking the pulse, and either going to vote of hitting the snooze button.

I suspect that a great number of Canadians feel exactly as you do, Danneau.

.. who are the adults in the room ?
.. who represents your riding and 'gets it' that its you and your neighbors dreams, needs and wishes that are JOB # 1 ? it should never be about 'politics' .. or political parties.. it should always be about public service. That in my view does not include religion or weaponry.. aside from freedom and safety to believe in & practice said religion.. as long as it is not intrusive or twisted upon someone else's religion. Adore Planet Venus or the great spaghetti monster.. I don't care. Be biblical, do morman backflips, go all Catholic & the Burning Bush, full Moses of the bullrushes.. go 7 times a week or never ever, adore Sunday NFL !! I care not.. be adoring of red squirrels fer cryin out loud.. Hell, sainthood for all turtles or muskrats.. go beluga !!

Partisanship is essentially toxic.. and elections and social media bring full on toxicity.. sadly. We get both barrels point blank always re 'grow the economy' - 'nation building' .. 'getting OUR resources to tidewater'.. That's the litany, the dogma.. the holy damn grail.. the be all and end all, forever n ever amen

That's precisely the problem, sal. Political parties have become churches -- each with its own dogma.

Monbiot alluded to this in his latest column where he argued that Johnson's no-deal Brexit camp are after one thing - their chance to shape society in their own image. It's not about the country or the damage they may inflict. It's about their ability to wield power.

The Liberals and the Conservatives, neither is in it for the country. If Canada mattered to them they wouldn't be hanging us out to dry by avoiding the danger of climate change and other environmental calamities.

They're both consummate neoliberals. Monbiot describes that ideological death grip:

"It has failed on its own terms, and in many other ways. Far from creating general prosperity, growth has been slower in the neoliberal era than it was in preceding decades, and most of its fruits have been gathered by the rich. Far from stimulating an enterprise economy, it has created a gilded age for rent-seekers. Far from eliminating bureaucracy, it has created a Kafkaesque system of mad diktats and stifling control. It has fomented ecological, social, political, economic and financial crises, culminating in the 2008 crash. Yet, perhaps because its opponents have not produced a new, compelling story of their own, it still dominates our lives.

"...Johnson uses neoliberal framing to justify his attacks on public safety. He wants to pull down environmental standards, create free ports in which businesses can avoid tax and regulation, and strike a rapid trade deal with the United States that is likely to rip up animal welfare rules and threaten the survival of the NHS.

"He rages against red tape, but the real red tape is created by the international trade treaties he favours, that render democratic change almost impossible, through rules that protect capital against popular challenge, and shift decision-making away from parliaments and into unaccountable offshore courts (“investor-state dispute settlement”). This explains the enthusiasm among some on the left for Brexit: a belief that escaping from the EU means escaping from coercive trade instruments. In reality, it exposes us to something even worse, as the UK enters negotiations with the US, holding a begging bowl."

Neither Trudeau nor Scheer will see that neoliberalism diminishes us as a nation and leaves us exposed to threats that will befall us once the political-corporate marriage evaporates and the people are left holding the bag. Damn them both.

This really is a critical election, Mound. If we don't choose a change in direction, we face a horrendous future.