The Costs Of Climate Change 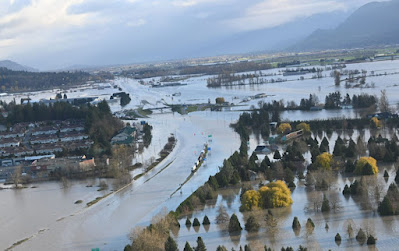 If you're looking for a case study into the costs of climate change, consider what happened to British Columbia in 2021. Marc Lee and Ben Parfitt write:

When Don and Mary Nowoselski moved from Dawson Creek in northeast British Columbia to the Creston Valley 30 years ago, they were looking for a little less winter.

But in 2021, they "lost 100 per cent of our crop. We didn’t pick anything. It was just cooking, is what it was. The berries just cooked. I’ve never lost a complete crop ever in the 30 years we’ve been doing it. We just had to walk away from it. It was pretty devastating," Don recalls.

And then there was the year-ending floods and landslides that left five dead on the Duffey Lake Road, thousands forced to flee their damaged or destroyed homes in Merritt and Princeton; police, fire, paramedic crews and volunteers scrambling to get people out of harm’s way; and thousands of businesses suddenly without supplies.

Singly, each of those three events exacted a heavy toll on the province. Collectively, they made for the single-worst climate catastrophe in Canadian history.

All of the individual stories like the Nowoselskis' add up to horrendous losses:

Our research, published today by the Canadian Centre for Policy Alternatives, shows that when the broad sweep of non-insured losses is considered — along with a number of other factors — the estimated economic hit in B.C. associated with 2021’s extreme weather events is in the range of $10.6 billion to $17.1 billion

Non-insured damages to households and businesses;

Lost income for workers due to closures or damaged transportation linkages;

Costs to the public sector, including immediate disaster response and longer-term cleanup and recovery costs, including rebuilding infrastructure; and

Specific impacts on vulnerable and/or marginalized populations such as people with low incomes, renters, seniors, Indigenous Peoples, immigrants and people with disabilities.

One key takeaway from 2021’s extreme weather events is that in many ways, they were linked, with one making the other worse.

Then came the heat dome:

The 2021 heat dome was at its worst over four days in late June when temperature records were shattered. Temperatures reached over 40 C in many parts of the province, leading to 619 heat-related deaths across B.C.

The farming sector, in particular, was hammered by the heat. More than 650,000 chickens and other livestock animals died, while certain crops were either significantly damaged or destroyed altogether.

The Nowoselskis were among those orchardists who used a rotating crew of between 50 and 100 pickers who moved back and forth between orchards as different cherry varieties ripened. The better pickers were routinely earning $300 to $400 or more per day.

We estimate that between $205 million and $328 million in income was lost in the most-affected sectors. Additionally, heat waves slow everyone down and therefore are also associated with general productivity declines. Over the four days of maximum temperatures, this likely cost the economy an additional $34 million to $84 million in lost productivity.

You get the idea. You'd think that, once climate change begins to cost you big time, you'd start to do something about it.

We're too used to an economic system that privatizes profits and socializes costs. The oil companies make record profits selling their wares, while governments and the public bear the social, health, environmental and cleanup costs. Nothing will change until this is rectified.

Definitely chose the right time to divert people's attention from the zero-sense tyranny being imposed by the Chinese Communist Party right now.

If we weren't being directed to look away, one of us rubes might dare to ask a simple question that many of us also asked our own governments a year ago: If the vaccines work, why enforce mandates and lockdowns? If it’s because the vaccines don’t work, then why try to force the population to take the jab? Beyond that, if the masks and lockdowns work, then why is China facing yet another supposed covid infection wave?

"We can no longer say this is a pandemic of the unvaccinated..."

Of the total 6,512 deaths recorded in August 2022, 58.6 percent of the deaths were attributed to vaccinated or boosted people, and seem to be a sign of a growing trend where vaccinated individuals are increasingly becoming the majority in COVID-19 mortalities.

In January 2022, COVID-19 mortalities in the vaccinated was still the minority with 41 percent of the data related to vaccinated or boosted individuals.

However, analysis of the CDC data from June and July showed over 50 percent of deaths were being reported in vaccinated individuals, with 62 and 61 percent reported respectively.

“We can no longer say this is a pandemic of the unvaccinated,” Cynthia Cox, the vice-president of the Kaiser Family Foundation told the Washington Post in an article dated Nov. 23.

Currently, long term studies on immunity against COVID-19 have shown that whether a person is vaccinated or infected with COVID-19, their immunity wanes over time.

Other research compared natural immunity with vaccinations often showed that vaccination tends to wane at a much higher rate than that of natural infection.

Some scientists also posited that mRNA vaccines may interfere with the body’s natural immune response. Since the current technology used in mRNA vaccines may “hide the mRNA from cellular defenses and promote a longer biological half-life and high production of spike protein,” according to a June 2022 paper published in Food and Chemical Toxicology. The spike protein is the main pathogenic part of the SARS-CoV-2 virus.

And on the other side of the world much the same Australia drought, floods & fires.

Scott Morrison, the then prime minister, dealt with the fires from his vacation spot on a Hawaiian beach.

COVID is a nasty virus, John. It's like one of the monsters in those old Universal Pictures. It mutates and keeps coming back. As for me and my house, we're still wearing masks when we go outside.

Some call that "leading by example," jrk.

John, the majority of people hospitalized after car crashes were wearing seatbelts. Does that mean we should end seatbelt mandates? Of course not, seatbelts have been proven to save lives and injuries. But, since almost everyone wears seatbelts, most crash victims were wearing them. You've fallen for a logical fallacy known as the base rate fallacy.

As for vaccines waning in effectiveness, what else is new? That's why so many of them require boosters. But getting a vaccine booster is much safer than getting infected with a live virus, even if the immunity doesn't last as long.

Your reasons for not getting vaccinated don't stand up to even modest scrutiny. Repeated bouts of Covid are a serious health threat, even in young and healthy people. Vaccines and masks are the basic means of protecting ourselves from Covid. If you want to take the risk, go right ahead. Just don't gaslight others into taking needless risks.