Back In The Resource Trap 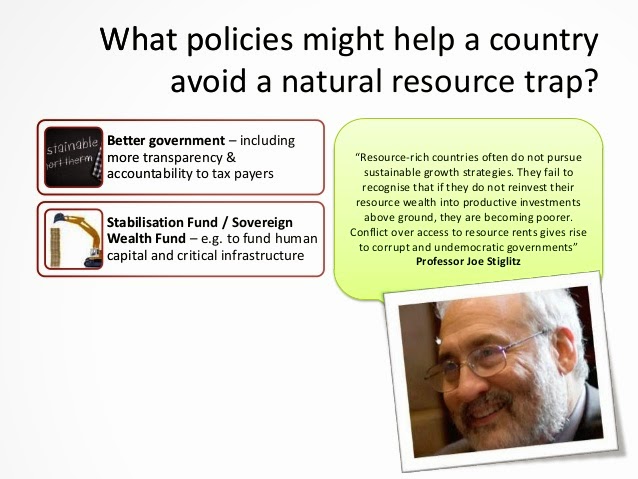 
For this government, Alberta’s oilsands were the key to Canada’s economic future.

Alberta heavy oil would be sold to the world at premium prices. Spin-offs would provide jobs for Canadians across the country.

It was a coherent vision. But it rested on one thin reed: an oil price high enough to cover the cost of extracting bitumen from the tarsands.


A couple of things have happened that Stephen Harper didn't -- or wouldn't -- foresee:

The reasons for the oil price collapse are varied. China’s energy-reliant economy is slowing down. New shale oil production from the U.S. is creating a glut. The cartel known as the Organization of the Petroleum Exporting Countries has been unwilling or unable to enforce high prices.

Anyone with a knowledge of history knows that this is an old problem for Canada. Harold Innes called it the "resource trap. And, for most of the twentieth century, Canada's politicians tried to avoid it:

Sensible countries try to lessen their dependence on volatile commodities. Canada, whose economy has been dominated by resource exports since the 16th century, spent much effort over the years trying to do break free from this dependence — usually by encouraging secondary manufacturing. The aim was to diversify the economy so that offsetting forces were created.

A fall in oil prices, for instance, might hurt Alberta’s petroleum sector. But the consequent cheap energy would aid Ontario manufacturers and the country could keep on an even keel.

For years, this was the unstated theory behind what was in effect a crude form of industrial strategy. Much of the time, it more or less worked.


And, if there's one thing Harperites don't believe in, it's having an industrial strategy. Unfettered markets are the way to salvation. Except they aren't.

And, once again, we're caught in a resource trap.

Email ThisBlogThis!Share to TwitterShare to FacebookShare to Pinterest
Labels: The Resource Trap

Just one more nail in the coffin of the self-proclaimed economist's reputation, Owen.

.. The smartest mail room clerk in the room ends up experimenting with a country named Canada..

But he's the so called genius.. the know it all
Smartest Man on the Planet now.. !

I recall Flaherty saying? The mine, oil, gas and the wealthy robber barons, sit on all of the money. That this stops the cash flow around the globe, which in turn causes a recession. The wealthy barons are bottomless pits of greed. They will steal your eyes and then, come back for the sockets.

Every time the wealthy robber barons line up at the trough and squeal for more money? Harper gives them another, $60bn in tax reductions. Harper steals from us to, give to the wealthiest outfits in the world.

It's Robin Hood in reverse, Anon.

It's all hype, salamander. And it's self generated hype. It gives the rooster the impression that the sun rises because he crows.

Eventually, Anon, Alberta bitumen will simply be priced out of the market.

Harper is like that Cyclops from Hellenic literature: only one eye and it was aimed in the wrong place and it too can get an arrow or sword through it...

So much for an energy superpower!

Unfortunately, there is a corollary to that analogy, Mogs. It's the old adage, "In the land of the blind, the one eyed man is king."