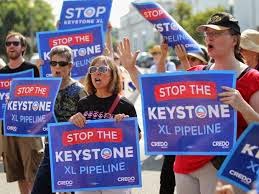 There is a lot of florid rhetoric coming from supporters of the Keystone Pipeline these days --  both north and south of the border. But, Tom Walkom writes, Keystone isn't as important as its shills claim it is:

The truth is that even if Keystone fails, a pipeline from the tar sands to tidewater will be built. The Liberals, Conservatives and New Democrats disagree on many things. But all agree that the so-called Energy East pipeline — from Alberta to New Brunswick — should go ahead.

Similarly, a world with no Keystone will not much affect carbon emissions. As long as there is some method of getting Alberta heavy crude to markets — by train, truck or pipeline — tarsands production will go on.


The United States has found energy reserves in North Dakota, so Alberta bitumen is no longer the prize  it once was. And, if Alberta oil finds its way to the Atlantic, it will make its way to world markets.

The truth is that Keystone is an idea whose time has passed. And its chief shill has proved -- once again -- that he is yesterday's man.

Email ThisBlogThis!Share to TwitterShare to FacebookShare to Pinterest
Labels: Harper and The Keystone Pipeline

While Walkom may indeed be right that carbon emissions would not be affected much whether or not Keystone is rejected, Owen, I can't help but think about the symbolic value such a defeat might have; as well it could well serve to keep the climate debate front and centre for a bit longer.

Keystone's defeat would encourage environmentalists, Lorne. And it would show how obsolete Stephen Harper's thinking is.

If Harper was serious about making Canada an energy superpower he would copy Norway who copied PET's NEP. Basicly Mulroney let big oil steal trillions of dollars in exchange for glass beads. Canada gets more revenue from the Lottery than oil resouces.

Even NEP light build a damm refinery would solve all the pipeline problems. Plus the refinery could be a green one, not the leaky ineffiecnt monsters in Texas.

But oil may be obselete already, vandium batteries promise to harness green energy, and flywheels will meter it out into a smart grid. The outlier is that cold fusion works, and is almost ready for market.

Owen, do me a favour. Please never use the HarperSpeak term "tidewater" again. It made my stomach churn when I heard it spoken by that old leatherback, Joe Oliver. If it was up to me, I'd make uttering it a hanging offence.

Actually the word is Walkom's, Mound. But I understand your fury. Walkom believes that -- one way or other -- Alberta bitumen will make it to world markets.

Whether or not that's good for the planet is another issue.

I agree, Steve. My hunch is that, eventually, Alberta bitumen will be out priced on world markets.

Everything about Harper is yesterday Owen and in some of his thinking he goes as far back as the dark ages.

He goes back at least as far as the 19th Century, Pam.

I believe Harper is done like dinner and cooked like chicken and he did it to himself and that ladies and gentlemen is the very best part, um example he hung himself..

We'll have to wait until the final vote count, Mogs, to see if Harper has done himself in.