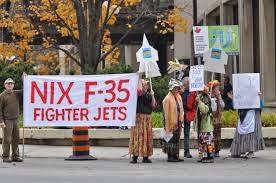 According to a Canadian Press story by Murray Brewster based on a Pentagon leak, the Harper government plans to buy four F-35s and slip the acquisition into the current fiscal year. In order to get the controversial jet by 2016 or 2017, Canada has to provide the F-35 Project Office with a letter of intent by mid-November. All this is documented in a U.S. Department of Defense slide show. Not a peep in Ottawa.

Nothing has been broached in parliament about this potentially imminent order of a jet that is grossly over-budget, grossly delayed in production, and mired in operational problems. If the story is accurate, there never was a meaningful review of the F-35 decision of 2010 — another lie.

After CP broke the story, defence minister Rob Nicholson was not in Question Period last Friday. But the government once again played silly bugger on the F-35 file when Bernard Trottier, the minister’s parliamentary secretary, rose to answer in his place.

Refusing to address the information in the Pentagon leak, he simply parroted the speaking points that no decision had been made to replace Canada’s fleet of CF-18s. Does anyone believe that if the Harper government wants to buy four of these jets that the F-35 will not be the choice to replace the CF-18? This is simply vintage Harper — getting what he wants by other means.


Once again, Harper has shown his utter contempt for Parliament -- and by extension, Canadian voters. Despite the fact that the Parliamentary Budget Officer and the Auditor General revealed that the government had lied about the cost of the jets -- and that they had supposedly gone back to the drawing board -- Harper is focused on getting what he wants by any means necessary.


If Harper is not thrown out in the next election, democracy in Canada -- like truth from the Prime Minister's Office -- will be dead.
Posted by Owen Gray at 8:38 am

Email ThisBlogThis!Share to TwitterShare to FacebookShare to Pinterest
Labels: The F-35 Debacle

He is most definitively taking his and ex-professor Tom Flanagan's essay to the max;

He must believe he is a dictator all of his actions speak to that factoid...

Maybe even jailed for treason!

"Harper is focused on getting what he wants by any means necessary."
And he wants to be reelected so beware the means he will use to do so!

"If Harper is not thrown out in the next election, democracy in Canada -- like truth from the Prime Minister's Office -- will be dead."

And his dictatorship has been accomplished incrementally, Mogs.

Unfortunately, Anon, with a majority, he no longer has to use that too.

His objectives are clear, Rural. If we let him accomplish them, we're fools.

There is a minimum number of airframes required to establish at operating unit. Think in multiples of 12, probably 24 or 36 at least. The cost of operating and servicing a handful is prohibitive.

The Pentagon's statement is to the effect that Harper wants 4 F-35s delivered in 2017. The balance of his purchase will be delivered over time afterwards.

And this is the man who claims that his ability to manage costs is his strong suite, Mound.

Like everything Harper does I have to ask myself, what the politics behind this decision is. Harper is so far up America's butt. that he can see Cameron.

And I supposed he thinks they're fraternity brothers, Pam.