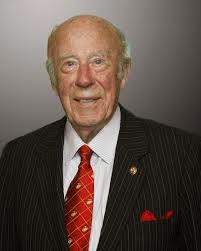 George Shultz is a Republican with a PhD in economics form MIT and a long record of public service. Jeffrey Simpson writes:

Mr. Shultz will turn 94 next month, but his interest in public issues persists. His latest interest is climate change. He’s bought an electric car, placed solar panels on his house and has been telling those in his party and beyond: “The climate is changing. If you don’t like the science, use your eyes.”

Imagine that from a pillar of Republicanism – a plea for a revenue-neutral carbon tax. Most Republican politicians run from the issue of climate change, their latest dodge being that they are not scientists and therefore cannot have an opinion on the science.


Shultz is a conseservative. But he was never a neo-conservative -- which is a round about way of saying that he accepts the validity of science. And the science is getting more and more ominous:

Last week’s fifth report of the International Panel on Climate Change . . . reported with more urgency and certainty than ever that the Earth is warming due to man-made emissions, principally from the burning of fossil fuels. The consequences for humanity will be grave, said the IPCC.

In that assessment, the panel agrees with Mr. Shultz, who has said that his two preferred policy choices – research and a carbon tax – will be far less costly than the long-term expense of dealing with climate change.


There are some conservatives who can actually think their way through a problem. But they are an endangered species.

What a stark contrast to the Fraser Instititute who recently suggested Ontario tear down windmills and start buring coal. In a related burst of stupidity they assessed the new information about Jihad fighters. Its been revealed that Jihadists are taking luxury cruises on their own dime to Turkey to join the fight. The Fraser Institute is now suggesting Canadian Soldiers should pay their own airfare to Kuwait or at the very least use up all their airmiles.

Unfortunately the powers to be in Canada, don't not believe in climate change. The Environment Ministry, has had their budget slashed. Canadian Scientists have had their budget, very seriously slashed to the bare bones.

Harper is having charities audited, he believes they are donating to, anti-tar sands groups. Even a weekend bird watching group, with a mere $16,000 budget are being audited. They made the mistake of writing a letter, expressing their concern regarding the Bee population. Harper the paranoid control freak, is having the bird watchers audited.

At what point, will common sense trump greed?

He ain't looking too bad for 94. I wonder if George would like to weigh in on Tony Abbott's "the future of the world is coal" or OPEC's forecast of $177 a barrel oil price and sales of 111-million barrels a day by 2040? Abbott and OPEC have essentially declared war on humanity and I don't see any sign that we're going to fight back.

Perhaps it's hopeless, Mound. It would help if -- somewhere -- there was a Howard Beale of climate change.

That's precisely the question, Anon. We await the answer.

And some folks still consider the Fraser Institute a fount of wisdom, Steve.

Tony Abbott is a goof! We travelled Australia for 3 months in 1999 and thoroughly enjoyed it as unlike Canada, it is travel friendly. However, while there and seeing the extremely dry conditions that exist, it became very obvious why most live at or near the ocean. It's dry!

We were also told that the whole of Oz can only support +/- 18 million humans because of lack of water, so Tony has himself a good back stop. In Canada, we are still bringing in hundreds of thousands of immigrants because we're seen as having the resources to support a much larger population. The bigger question for us is: how much longer will we have potable water? Without water, we all die and there will be individual wars fought (neighbour against neighbour) for those last buckets of water. Perhaps that what these evangical nitwits consider as part of their much sought after 'rapture'?

There are those who claim that, in the future, water will be more valuable than oil, Lulymay.

But it would appear that Mr. Abbott would have no scruples about turning the planet into a desert.