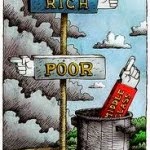 As the details of Stephen Harper's income splitting plan are made public, it becomes clear how grotesque his "family friendly" policy is. Carol Goar writes that a small minority of Canadians will give income splitting enthusiastic support:


For about 15 per cent of the population, the answer is an enthusiastic yes. These taxpayers — typically high-earning breadwinners with stay-at-home spouses and kids — will receive an average of $1,140 more a year in tax relief and children’s benefits.

For 12 per cent of Canadians — single parents and working parents in similar tax brackets — the answer is an equivocal yes. They’ll get an additional $615 a year in children’s benefits, but no tax reduction.

For the remaining 73 per cent of the population — couples without children, parents of children over 18, young singles and pensioners — the answer ranges from an altruistic maybe (in the case of grandparents) to a flat no (in the case underemployed youth). They will get nothing.

What this amounts to is a massive income transfer wrapped in child-friendly language.


And, when you get into the fine print, the gross injustice of Harper's tax break is stunning:

In all cases, tax dollars flow from the majority of Canadians to a well-off minority.


But Harper has always been about serving the interests of a well off minority.
What's new?

The Income-splitting tax break does not benefit approx. 73% of Canadians. The majority of Canadians are against this tax break. Harper still goes ahead with it even though it could cost him many votes or even contribute to him losing the election in 2015. What am I missing Owen?

It's called tunnel vision, Pam. There's only one goal and one option. It's become an obsession.

This is typical of Harper, to take from the poor to give to the wealthy.

Harper's oil and gas robber barons benefit greatly from Harper too. Every time they line up at the trough and squeal for more money? Harper gives them another $60 billion in tax reductions. Harper thieves from us, to give to the wealthiest outfits in the world.

Harper never does anything, out of the goodness of his heart. Harper does what benefits Harper.

Now Harper is flying away in his gaudy, Air Force One plane to Communist China. None of us here, want Communist China on our Canadian soil, what-so-ever. Many signed the petition against Harper's asinine deals with China.

You've once again made clear, Anon, why the next election is so important.

And what's your solution to try to boost Canadian birth rates, while ensuring stability, and care for the most vulnerable?

How do you propose we keep the socialist ponzi-scheme going? This sounds more critical than it's intended - our cradel-to-grave society is a ponzi-scheme dependant upon new blood year after year. We're not reproducing. Shall we keep importing people from overseas?

What solution do you offer to the comming demographic winter?

I'm all in favour of families, Anon. But I'd suggest that the best thing this government could do to support families is to create good paying jobs -- ones that would offer hope to the young people who are the parents of tomorrow.

I can't agree with Anon at 3.04 pm with regards to this socialist ponzi-scheme stuff. Maybe Anon doesn't buy into the notion of a 'just' society, but really, isn't that the underpinning of a great democracy? It hasn't been the fault of a few social programs that benefit the masses that have put our country in massive debit; rather it is the massive tax and royalty concessions to those closest to neo-con politicians that have cost us so much.

With respect to this so-called need to boost Canadian birth rates is concerned, what is the point of boosting either birth rates or immigration when we see no jobs in our future other than those at a non-livable minimum level. Even those jobs we are told must now go to TFWs. We no longer have a manufacturing base that traditionally supported our middle class and our valuable resources have been given away to entities outside of Canada who have no interest in the welfare of our citizens. Fact is, the wealthy do not share their wealth, and I don't have numbers, but it seems that the wealthiest in Canada are not producing 'widgets' to sell or trade, but are primarily engaged in more service type businesses such as banks, telecoms and, of course, politicians.

I don't know if there is a doable repair for what ails us. We can certainly help ourselves to some extent by getting rid of the Harper government, but seems like we're in so deep, it will take a generation to even start to dig us out.

Right now, I'm having a hard time being optimistic about much!

There are no quick fixes for the damage Harper has done Lulymay. But the first step toward progress is to stop doing what we have been doing for a generation.

Owen - No, no you're not in favor of families. I appreciate that you believe that you are, but if we look hard and long enough into your own thoughts, we'll find something that is totally inconsistent. Probably multiple things. As such, this is a lie you've constructed for yourself. To your credit, you're in very good company as the vast majority of Canadians, probably 95% or more hold at least one anti-family belief. True supporters of families with fully consistent ideas are exceptionally rare.

To that end, well-paying jobs will not do [b]anything[/b] other than temporarily delay, and perhaps slow the eventuality of the collapse of our economy and culture. To reverse course, you've got to be willing to challenge your most deeply held thoughts, and beliefs. The vast majority of people can't handle that particular examination, and will resort to all manner of sophistry to avoid the unpleasant implications.

And, Stephen Harper is no more pro-family than you are. At best, he's making an overt and sincere effort at being pro-family, but because he shares at least one of your internal inconsistencies, his efforts will not ultimately succeed. He may slow the decline, but he cannot reverse it. And even if possessed none of the internal inconsistencies, he would never succeed in selling it to Canadians. He is not nearly powerful, or significant enough to change the culture. At best, Harper is far too little, far too late.

Lulymay - There is a solution. The culture its self is unwilling to entertain it. There are two ways out. Either the culture will die, largely of self-inflicted wounds, or, the culture will challenge some of its deepest and most dearly held beliefs, make the changes necessary, and if we're not crushed by an exterior force, we'll rebuild.

Truthfully, it's good that you see that we have a problem, but like most, it's troubling that you almost certainly lack the intestinal fortitude to see what has truly caused it. Its origins predate Harper by well-over two generations. Sadly, the latter, not being willing to take a good hard look at what truly ails us might as well be the same as not seeing the problem at all.

Harper has decreased his support for all three of these cornerstones.

The health of a family is primarily an individual responsibility. But, because all individuals don't start out with the same advantages, government can at least try to make the starting points more equitable.

Owen - and there it is. The government lacks the abili4ty to bring unsuccessful people upward. Rather, the government's only ability to equalize is that it can punish success.

I disagree, Anon. My father was a World War II vet. He was one of six children whose father died when he was two. The family had no money.

After the war, the government sent him to university, where he obtained a degree in Mechanical Engineering. All five of his children also got good educations, which were subsidized by public funds.

Government gave my father an opportunity -- which he used as a springboard to success.

Where did the money come from to do all of that? It may be comming from your children, or their children.

Sooner or later, that bill will have to be paid.

The effects of punishing success may not be immediately evident, indeed, often they are not. But make no mistake, someone somewhere, some time is haivng their success punished in order to enable someone else's.

Don't get me wrong, please. I don't begrudge any of your family success, and I don't want to have veterans living in poverty. Nothing of that sort. This isn't a personal thing. It isn't even a right or left thing because this is has been done by both sides of the political spectrum. The only real point here is to illustrate that someone, somewhere had to be in some capacity diminished in order to provide the opportunity for your father. And this is not to say that this was necessarily unethical. This is to say that the degree to which the government should do this should be, must be, very circumspect and limited.

The eventuality of punishing success manifests in various ways, and in our particular culture, one of the manifestations is the sub-replacement birth rate. There are other indicators, and in time they will become very loud, and very evident indeed.

Which is to say, Anon, that progressive taxation is a good idea. Some people can afford to be "diminished." Others' can't.

The problem is geting the balance right.

Except of course when the ever-increasing bill is sent to the future.

You eventually reach the point where the future cannot escape from being impoverished because it has to keep promises to the past.

Detroit was strangled because the leaders of the automobile industry made a a habit of making poor economic decisions, Anon.

Ontario's industrial base has shrunk as Harper has put all his eggs in the resource basket.

History only repeats itself if people refuse to learn from history. The Harperites are no students of history.

With regard to Ontario, I suppose that the record high electricity has nothing to do with it.

Not to mention crippling over-regulation, a government insisting on being an economic basket case, rising payroll taxes. No effect whatsoever right?

Harper may have over-emphasized resource extraction, that is true. But I seem to have forgotten the part where he was Premier of Ontario. Or Mayor of Toronto maybe...?

And you're not entirely correct about Detroit. It's true that the big three were resitant to innovation which contributed greatly to their economic woes.

However, I seem to have missed the part where the UAW realized that their unfunded entitlement programs needed major restructuring, and that there really is NSTAAFL.

And was it not government which came to the rescue of the auto industry, Anon?

And now you're arguing in favor of golden parachutes auto company executives...

No, Anon. You're losing you sense of perspective.