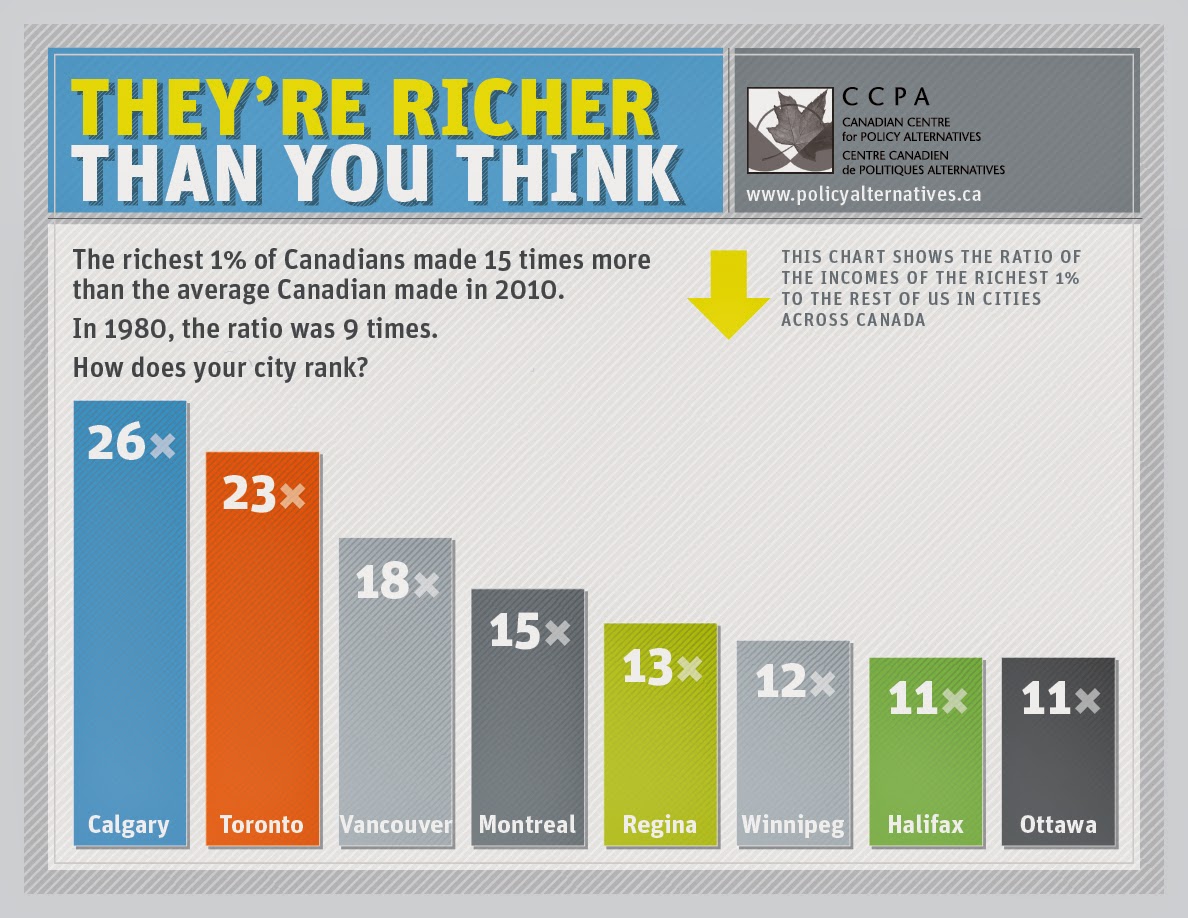 Canadians like to think that income inequality is an American problem. But, Linda McQuaig writes, on that meme, Canada is a close second behind the United States:

It’s true that the U.S. has the most extreme inequality, but a recent OECD report noted that Canada has the second-largest share of income growth going to top earners.

However, even that OECD report understates the drift of wealth to the top in Canada — according to dramatic data from a recent academic study which received relatively little attention.

It shows that billions of dollars in income received by the very richest Canadians have not been included in calculations of their income. That’s because the wealthy funneled this money through private corporations in order to legally reduce their taxes — a practice that is more widely used in Canada than the U.S.

Once this income — amounting to an astonishing $48 billion in 2010 — is added to their reported personal incomes, Canada’s rich are considerably richer than we’ve been led to believe.

For example, according to commonly-used data, the average income for Canadians in the top 1 per cent is $359,900. However, this doesn’t include money channeled through their private corporations. Once we include this additional income, the actual average income of these high-rollers rises to a much heftier $500,200.


And, remember, all of this has been happening while 37,000 civil servants have lost their jobs, while medicare funding has been cut and while veterans affairs offices have been closed:

The study also shows that the share of Canada’s national income going to the top 1 per cent — commonly believed to be 10 per cent — is actually 13.3 per cent, once private corporation income is included. This share has been rising, from 12 per cent in 2009 to 13.3 per cent in 2011 (the latest year available).


Meanwhile, the OECD has warned that:

“Recent empirical work finds that high levels of inequality are harmful for the pace and sustainability of growth.”

Like what is the price of home heating? etcetera...

True, Mogs. It costs more to live in Vancouver than it does in Halifax.

Problem in Vancouver, there are Chinese suing to get into Vancouver. Harper's Omnibus Bill says they can.The Chinese are buying up everything they get their hands on. Vancouver is dead in the water as they say, Communist China is already running Vancouver and eventually will run everything. No everyday Canadian could ever buy a home in Vancouver.

I told my son to apply overseas, to take his family and get the hell out of Canada.

When you talk politics with, my little six year old Granddaughter? There is no guile nor greed. Just what is right and what is wrong. She certainly pegged Harper as a liar and a thief.

It's interesting that your granddaughter is immune from the hype, Anon.

I am of the last generation of Canadian-born Vancouverites to be able to own nice homes in that city. We bought in the mid to late 70's when properties were still affordable on a Canadian salary. We were able to raise our families in very nice neighbourhoods. Our children won't have that experience. The influx of wealthy Asians, particularly from Hong Kong, have driven the market far beyond what our kids could hope to afford.

CBC reported that for two young professionals to buy an older home on the least-desirable east side requires 83% of their combined, after tax income. It's a damned disgrace that our own federal government should have allowed this to happen.

We have three sons -- two in their early thirties and one who just turned twenty, Mound.

Our two older sons believe they will always be renters, never able to afford their own homes.

There was a Toronto Sun at the coffee shop yesterday. I read it for laffs.

The idiot hack/stooge Brian Lilley was ranting about how the rich in Canada already pay WAY more than their fair share.

I started to get nauseous at the sight of a guy so shamelessly kissing the asses of his paymasters, so I stopped reading.

People like Lilley are shameless, thwap. The injustice behind their position is painfully obvious. But, then, they never believed in a Just Society.