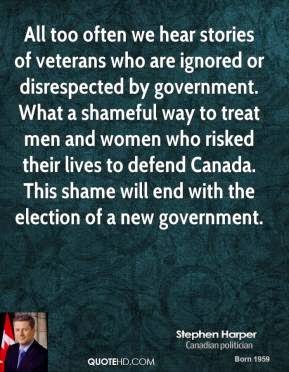 From the very beginning, Stephen Harper has claimed that he stands for and with the troops. But, Michael Harris writes, the men and women who have actually been in battle have declared war on the Harperites:

In fact, the veterans are here not to praise Caesar but to bury him. That’s why veterans Ron Clarke and Mike Blais have launched an Anybody But Conservative campaign to rally opposition against the government in time for the election.

Those who have been watching the veterans’s file closely on Harper’s watch — rather than listening to the Top Gun drivel being dished out by the PM — know that a national disgrace has been unfolding in Canada. While the Harper government has been a great little military monument-builder ($50 million added to that budget), it has abandoned the flesh-and-blood veterans who came back from war needing help.

The budget tells the story:

Since 2011, the Harper government has cut $226 million from Veterans Affairs administrative funding — a 30 per cent chop. That’s why one of Harper’s strongest supporting groups — veterans — has turned against him. Or rather, Harper abandoned them first.


And statistics tell the sad tale of what has happened to vets under Harper's watch:

Take the issue of suicide. The Canadian Forces have a suicide rate that is twice as high as the rate in the British Armed Forces, which are three times larger. What ever happened to the idea of hiring an adequate number of mental health workers to deal with the victims of Post Traumatic Stress Disorder, the handmaiden of suicide in many cases? When Peter MacKay was minister of Defence, he promised to hire extra medical personnel to deal with this dire legacy of Afghanistan. I guess he couldn’t figure out how to turn it into a photo-op.


Worst of all, Harper appointed Julian Fantino to the veterans portfolio:

The Harper government saved $3.8 million by closing those nine VA centres. It proceeded to add $4.5 million to Fantino’s ad budget to assure the viewers of Hockey Night in Harperland that the government was doing a great job with vets.


Canada's veterans figured out long ago that the man who likes to walk around in a flight jacket talks out of both sides of his mouth. They are rising in a growing chorus to tell it straight. They know their real enemy.

Email ThisBlogThis!Share to TwitterShare to FacebookShare to Pinterest
Labels: Vets Mobilize Against Harper

" They know their real enemy. "

They know when they've been had, Mogs.

Vets may know who their enemy is and that they've been had but come the next election they'll vote Conservative again.

We'll see, Toby. There appears to be a growing number of vets who are prepared to show Harper the door.

"Canada's veterans figured out a long time ago that the man who walks around in a flight jacket talks out of both sides of his mouth." In 2015 Owen, let's see if the Canadian public has figured it out.

That's the question, Pam. Have Canadians figured out that they've been had?