And They Call That Brilliance 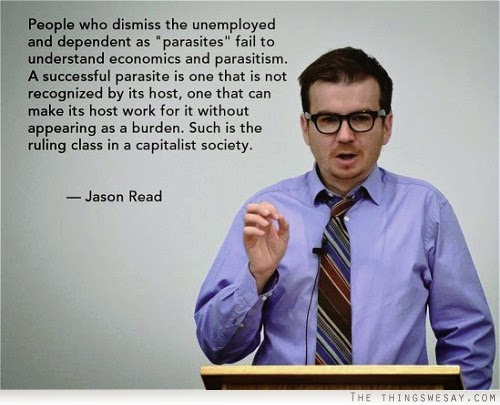 
Under Oliver’s plan, small-business owners will see their employment insurance premiums cut by about 15 per cent over the next two years.

Oliver’s claims were supported by the Canadian Federation of Independent Business, a lobbying group, which said the measure would create about 25,000 person-years of employment over an unspecified period.


This week the Parliamentary Budget Office released a cost-benefit analysis of Oliver's plan:


In a report released Thursday, it says that the two-year, $550-million tax break will produce only 800 net new jobs.


There was another way to use Employment Insurance to create jobs:

Instead of lowering EI premiums overall (which, according to the parliamentary budget office, would have created 10,000 net new jobs), the government made a bow to its key small-business constituency.


But, as always the stated aim of the policy was not its real aim. Oliver was buying the votes of small business, not creating jobs. Nothing illustrates the corporate juggernaut better than what has happened to Employment Insurance in the last 25 years:

During the 1990s, Jean Chrétien’s Liberals used the employment insurance surplus to pay down the deficit and offer tax breaks to corporations.

When he took power, Prime Minister Stephen Harper did much the same. In 2008, the EI fund’s $57.2 billion surplus was quietly absorbed into general government revenue. Even now, the Conservatives are reluctant to relinquish their hold on the EI windfall.

The parliamentary budget office estimates that over the next three years, Ottawa will collect $6.4 billion more in EI premiums than it will spend on the unemployed.


That's because only 38% of Canadians are now eligible for Employment Insurance.

And they call that brilliance.

Email ThisBlogThis!Share to TwitterShare to FacebookShare to Pinterest
Labels: The No Jobs Jobs Plan

How do we ever get out from under this, Owen, short of throwing this whole rotten business over? The EI surplus is supposed to be invested, not drawn into government revenues or used, as Chretien apparently did, to fund corporate tax cuts. Harper is the worst but it sounds like the Liberals were merely "less worse."

I found it telling that Cruickshank didn't mention media reform. As though we can ever reclaim effective democracy under today's massively concentrated, corporate media.

Yes there is much that the education system can do. At high school I studied French, German and Latin and, for a brief period, became conversational in all three. My kids learned French because they were in French immersion K-12. But their knowledge of Canadian history is abysmal. They were educated to be detached from civics. Try to address that with teachers and they'll roll their eyes.

One teacher out here defended the lack of Canadian history by pointing out that a majority of the kids were from other cultures and then claiming it would be unfair to teach Canadian history and not Indian or Pakistani or Chinese history. When you have teachers with their heads that far up their asses you can forget about properly educating your children.

They were both serving the same masters, Mound. The difference was a matter of degree.

As for a knowledge of history, long ago -- when I taught in Quebec -- a requirement of the curriculum was that each student had to take one course in Canadian history. They did not, however, have to pass the course to receive a high school diploma.

The problem goes way back.

Yes, that problem does. My time in the public school sector was early 70s to mid 80s, and from Jr. High onwards I complained about the lack of any serious study of civics (growing up in a family with deep political roots to both main parties left me more aware of that importance than most kids, also being a bit of a bookish outsider didn't hurt either) to teachers, and was met with either a shrug or mutual dissatisfaction accompanied with a we can't do anything about it, the masters have spoken.

One of the main tools that allowed Harper and his wing of politics in this country to rise was that massive ignorance regarding how our political institutions function and why they did so, which any basic civics course and history course would have taught. I mean the most breathtaking example of just how bad things were for me was when the Harper government during minority government claimed that the will/power/authority of that government was superior to that of Parliament as a whole. That was over the Afghan detainee documents issue. That is as we all know completely and utterly the opposite of how our Parliamentary system is set up, and that it went by with such little notice outside Ottawa when that should have been a flare lilt tip off to all Canadians about what kind of government Harper truly was after, well that just showed yet again how deep that rot was.

This has been something I have railed about since I was a Jr. High school student onwards, and always it got me looked at like I was some kind of fanatic or idiot (or both) because after all it didn't affect the day to day living of people. The fact that this is how they saw it only underscored to me the need for making basic civics a required passed course in high school, because anyone in an open society that takes their system of government so completely for granted is begging to have it taken away from them with the money/power/interests to do so, as we have so clearly seen happen with the Harper regime.

The enemy of democracy is apathy, Scotian. Mr Harper understands that. And he's working hard to make sure that Canadians remain apathetic.

Would someone who understands this issue please explain how lowering premiums to employers will create only 800 net new jobs, while lowering them overall would create 10,000?

It all depends on what people do with the money they save in taxes, John. Economists call it the "velocity of money" -- which refers to how many hands that money passes through.

If you cut taxes on the rich -- and there are much fewer of those folks than there are of ordinary folks -- there will be less money injected into the economy, because that money will pass through fewer hands. In fact, the rich don't necessarily spend their tax cut. They save it. The money doesn't move.

Ordinary folks tend to spend their tax cut. That creates demand for goods and services. And demand creates jobs.

Conservative ideology maintains that cutting taxes on the wealthy creates jobs. In fact, the opposite is true. Cutting taxes on ordinary folks increases the number of hands the money passes through.

Owen, I don't know how that second comment of mine found its way onto your blog. It was a response to Lorne's piece about TorStar's Cruickshank's remarks about youth disengagement and distraction. Completely off topic here. Sorry.

Opening minds has been left to someone else -- we're still waiting for that someone to show up.