What To Do With The Surplus? 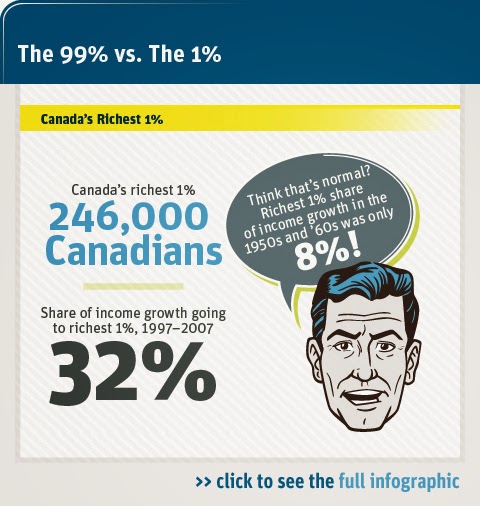 There's going to be one. And, if the Harper government gets its way, it will go to tax cuts. That happened under the Liberals, too. Linda McQuaig writes:

The trick is to make surpluses disappear quickly by doling them out in tax cuts — before there’s time for a serious national debate about what the electorate actually wants to do with their money.
So when Ottawa started generating big surpluses in the late 1990s, it quickly began slashing taxes — particularly on corporations and high-income earners. As a result, Ottawa now collects about $50 billion less in taxes per year than it would have if it hadn’t done all that tax-cutting, according to labour economist Toby Sanger. That has deprived governments of the revenue they’d need to provide the kind of enhanced public programs many Canadians probably would like.


That's what right wing think tanks are advocating.  The International Monetary Fund, however has suggested that now is the time to spend on infrastructure. Scott Clark and Peter Devries write:

“The time is right,” says the International Monetary Fund in its latest World Economic Outlook, “for an infrastructure push.”

“In many advanced economies,” says the report, “there is still substantial slack … Robust demand momentum has not yet taken hold … There are now worries that demand will remain persistently weak — a possibility that has been described as ‘secular stagnation’.”


Yet the Harper government insists that the way to grow an economy is to create supply, not demand. Which raises the question, who was all this austerity for? Not for ordinary folks. Consider what has happen to medicare funding, writes McQuaig:

When medicare was established in the late 1960s, Ottawa covered 50 per cent of the costs. Today, Ottawa contributes just 20 per cent — and this will fall to a mere 12 per cent over the next few decades under the new health care funding formula unilaterally imposed on the provinces by the Harper government in 2011.


The money which used to fund medicare has gone into the pockets of the wealthy, a trend which will continue if the Harper government introduces income splitting:

This is, of course, exactly what the Harper government is planning to do. It has promised to introduce income-splitting — a costly and deeply unfair tax cut which would see almost all of the benefits go to well-heeled families with stay-at-home mothers.


If you're a politician these days, it pays to look after the rich. they'll look after you in your retirement. The surplus benefits the wealthy and those who serve them.

I have a feeling that this regime, Owen, which essentially takes its marching orders from the corporate world, will do nothing about issues like our deteriorating infrastructure, already under severe stress thanks to climate change, until business demands it loudly.

As for medicare, Harper is already well on the way to 'starving the beast.'

Harper would like us to forget, Lorne, that the National Citizens Coalition -- which he used to head -- came into being to oppose medicare.

His stealth campaign to kill Tommy Douglas' dream has been quite successful.

Yes, it has been, and TD's successors/inheritors deserve to wear the responsibility for it by enabling the moderating of Harper's image by not denouncing him for the extremist he clearly always was back when it could have stopped him from getting to the PMO. This is after all why I have such rage in my heart for the NDP these days, and why my wife went from hard core Dipper to ardent Trudeau Liberal. In my pleas back then to the Dippers to stop Harper I kept pointing out the dangers to their own core beliefs, policies, and principles represented, and that if they didn't act to stop someone like this from gaining power then what was their point in existing to begin with?

But no, they had to lie and keep their tired refrain of Lib Tory same old story despite the fact the Tories no longer existed and that Harper was something right out of the Cheney Straussian cabal of the far right American conservative political ideology. Way to go Dippers, and then you wonder why so many voters are unwilling to trust you with real power, well acting this way is certainly one very good reason and example!

I can't believe Tommy would be happy with what the NDP has become, Scotian.

But he'd be even more enraged by what has happened to Canada under the Cowboy from Etobicoke.

How much money did Communist China pay Harper, to buy Canada?

How much does it cost for, Jason Kenny to bring thousands of foreigners over, to take Canadian jobs?

Oliver and his EI scam?

Every time the wealthy barons line up at the trough and squeal for more money? Harper gives them another, $60 billion in tax reductions.

Why is Harper not being charged as a traitor, doing acts of treason against Canada and the citizens? This country is ours and not Harper's nor, Communist China's.

That's what the next election is all about, Anon.