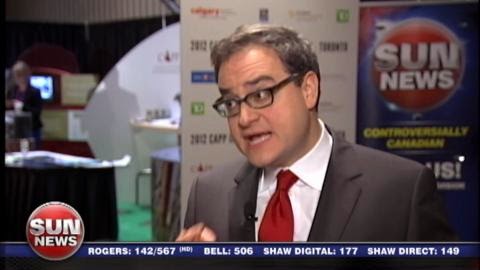 Michael den Tandt writes that the apology Sun News issued this week to Justin Trudeau will go down in  history as a superb example of  insincere sincerity:

Having first suggested last week that Levant is not really a Sun News journalist, but rather a mere comment contributor, the network saw fit to broadcast its mea culpa via a voiced segment, in vintage newscaster baritone, that aired just before Levant’s regular Monday evening spot. The host himself did not apologize, or acknowledge the apology in any way. It was as though, as far as he was concerned, it hadn’t happened.


Like Paul Calandra's blubbering last week in the House of Commons, everyone knows that, behind the babble, there is no commitment to change:

Perhaps Levant threatened to quit rather than personally apologize? Or maybe the network preferred not to force the issue. Either way, it is now a given there will be future Levantist overreach, given this host’s odd, almost fetishistic obsession with the Trudeau family, and the federal election in the offing. No matter what tripe Levant spouts, whether about the Roma or about a federal politician, Sun Media does not withdraw his platform. Clearly, they love the guy.


Brian Mulroney reportedly insisted on the apology. But clearly there will be no attempt to change the organization's culture. In fact, nothing in Conservative culture has changed -- not for Levant, for Calandra -- or for the master of insincere sincerity --  the multiply apologetic Rob Ford.

But, den Tandt writes -- all indications to the contrary -- people are not stupid:

Despite every attempt by political professionals to purge a sense of honour from our politics, the majority of individuals still possess an instinct for truth. They still respond viscerally to its obvious presence or absence. They still can spot insincerity for what it is. And they are still predisposed, in a democracy, to punish politicians who routinely play them for fools.


Which begs the question: How will Canadians react when Stephen Harper tells them that going to war in Iraq is a "noble" enterprize?

I for one react this way: Steve involved in another illegal war overseas, who is the terrorist now?

He only received 24% of the eligible vote he does not represent me and he is in breach of his constitutional duties. For that I will raise funds [you will see ads soon] and have him and all the cons removed from office, mark my words when I've made up my mind I do not stop until I've achieved my goal. For all you trained con seals "I was only following orders, doing what I was told to do will not cut mustard the Nuremberg trials set that precedent after the collapse of the Nazi regeime now comes the collapse of the Harper regeime I will see you all at your trial.

I have been working underground on this for quite some time now I'm outing it.

It will be interesting to see what happens, Mogs.

Today CBC had a segment with Ambrose and a Health Canada doctor telling us how prepared they are to protect us from Ebola. I listened and could not bring myself to believe anything they said. That's a sad state of affairs but what happens when all we hear from Harper Cons are lies.
Even if they tell the truth we don't believe them.
Norm

They have insisted that spin will save them from their own folly, Norm.

But, after awhile, the same hot air can't keep the balloon aloft.

They say, even CBC is pro-Harper. You really can't believe anyone, in the position of trust

Harper is the worst terrorist to Canada, we have ever known. Harper ranted and raved regarding, Putin and his evil Communist regime. Harper had no qualms of, selling Canada to the Communist China regime.

Harper was very nearly charged with, war crimes and crimes against humanity. Harper had bombed Libya, with no declaration of war.

Anything even remotely connected with Chairman Mao Harper, is automatically deemed a lie.

Levant, Limbaugh, Hannity... there's something so odious about these types. They besmirch the society in which they operate, knowingly lying to those who will listen to them. It's this wilful manipulation of those who are susceptible to these creatures that casts them as predators. They set out to lie to their audiences, to stoke fear, resentment and bigotry.

It's interesting that, so far, Harper has had nothing to say about the protests in Hong Kong, Anon.

Such was not the case with what happened in the Ukraine.

SpunNews obviously doesn't expect their apology to be taken seriously, given that Ezra's article is still up on the SpunNews site.

And they continue to insist, Mound, that they are part of the "fair and balanced" coverage of events.

As Mark Antony said, Alison, "So are they all, all honourable men."

Now is the time to watch harper closely, Owen, As you pointed out "Mr Democracy"has had, and I wager will not have much to say about the Hong Kong demonstrations. He is heading to China shortly for a trade mission. He knows that very few are buying the apology by Calandra. Levant and the Fords seem determined to show modern conservatism for what it is .... and I am sure this is not going down well in the PMO.
And he is determined to show that ISIS(or L) is an existential threat to Canada so we must bomb them (as if that has worked so well in the past!!). He would have had us in Iraq with the American and the British (how quickly we seem to have forgotten that FUBAR mission?!?) I think Obama is asking a lot to request other countries to help fix a the blowback from American fiddling. Harper may pay the price for his diminished integrity.

His integrity has been diminished for a long time, Asking. What's amazing is that he has lasted as long as he has.

Is it Dr Smith or Stephen Harper

Thanks, Steve for the link. The Harperites have been lost in space for a long time -- and they show no inclination to find their way out.