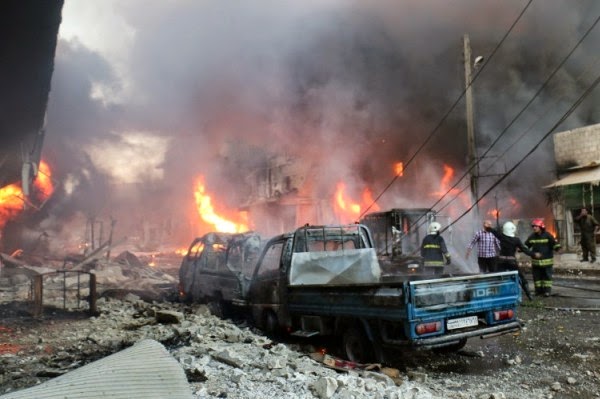 Paul Adams has an interesting piece this morning over at ipolitics. As of yesterday, Canada is now officially at war. Adams points out that, in the last twenty-five years, the United States has led five major wars in the Middle East. The only one that succeeded was the First Gulf War. It succeeded because Colin Powell thought very carefully about the situation before sending troops into the desert. What guided Powell was what has become known as the Powell Doctrine, which is best summarized in the answers to five questions:


Adams writes that some thought has been given to answering the first two questions. But the rest of the answers -- particularly to questions 4 and 5 -- have been ignored:

Neither the Obama administration nor, for its small part, the Harper government has been frank about the potential costs of the mission. I am thinking now not just of the financial expense of an open-ended mission. I’m also talking about blowback from the Muslim world — which includes the implications of allying ourselves with the loathsome, head-chopping Saudis and, if we are honest, Bashar Al-Assad’s Syrian dictatorship. Not to mention the motley crew of Iraqi fighters who are now our military avatars.

Nor do many people who know about these things think that the military mission as it is now conceived — that is, bombing Islamic State and supplying the ragtag forces of our new best friends on the ground — can achieve its supposed aims. Stephen Harper, who seems so pleased just to be on the team, may say the mission is to “contain” Islamic State. But Obama, whose team it is, says the goal is to “eliminate” it.


We have entered a war without thinking about its long term consequences. When going to war, the standard advice is," Ready. Aim. Fire." We've got that advice backwards.

I am amazed at how quickly military violence has become the solution to any conflict that arises.It seems to be accepted and unquestioned by the public in the west. Negotiation and diplomacy are not even on the table. The continued war mentality in the U.S. indicates to me a culture of intellectual and ethical bankruptcy. I would never have contemplated WW111 taking place in my lifetime. Now I think it is a distinct possibility.

Andrew Bacevich -- who teaches International Relations at Boston University and is a Vietnam vet -- wrote a book a few years ago called The New American Militarism, Pam.

It's a good read and it documents how the American Right has preached the notion that international relations should be all about applying the tools of hard power.

Stephen Harper has never had an original thought in his life. But he's very good at borrowing others' thoughts -- particularly from the American Right.

We're following Powell's alternate doctrine, the Pottery Barn rule - you break it, you bought it.

You might think after our stint in Afghanistan we would have learned better but nope. Such is the life of those serving in the Global Hegemon's foreign legion. You ride to the sound of the guns.

Pete Seeger's question keeps echoing, Mound. When will they ever learn?

They are selfish thugs the war mongers.

They believe a war will help them win the next election, Mogs.