One Last Assault On Labour 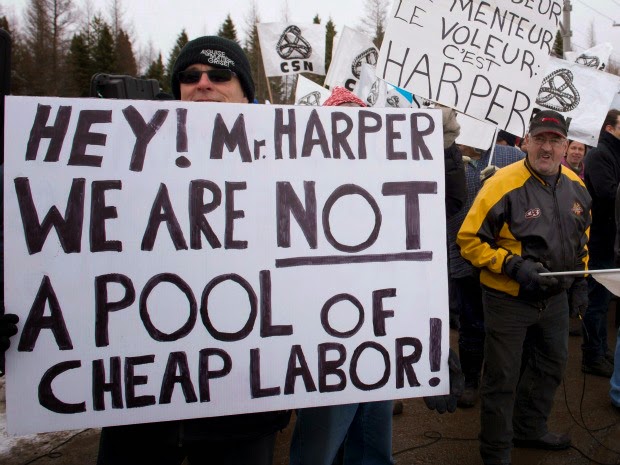 Jim Stanford writes that, by resurrecting Bill C-377, the Harper Party is making one last assault on labour. The bill died in the Senate last year when Conservative senators, led by the now retired Hugh Segal, revolted and refused to pass the bill because -- according to Segal -- it was "flawed, unconstitutional and technically incompetent."

The revived bill is still probably unconstitutional because "it almost certainly violates provincial constitutional authority and federal privacy standards." But whether or not a bill could pass constitutional muster has never been a Harperite concern. So the prime minister's minions plan to charge ahead.

But, Stanford writes, that strategy has been failing throughout the country:

In addition to the C-377 debacle, several other labour issues unfolded badly for the Conservatives (and their provincial counterparts) in the last year. Ottawa backtracked dramatically on its Temporary Foreign Worker program in the face of public outrage – opposition led by unions. In Ontario, PC leader Tim Hudak self-immolated in fiery anti-union rhetoric. In B.C., Premier Christy Clark’s attempt to paint the teacher’s union as public enemy number one backfired; she finally withdrew (after a needless three-month strike) her plan to unilaterally seize control over classroom sizes. Even in Alberta, the least unionized province, new Premier Jim Prentice quickly abandoned two confrontational (and likely unconstitutional) anti-union pension bills, told by MPPs they were hurting badly in their constituencies.


As in so many other areas, the tide is turning against the Conservatives. Unions are increasingly being seen as:

an institutional bulwark on the side of all those who work for a living, defending vulnerable people within a social order that is increasingly lopsided. As unions succeed in that effort, the political value of union-bashing will continue to erode.


But don't expect the Harperites to get that message.