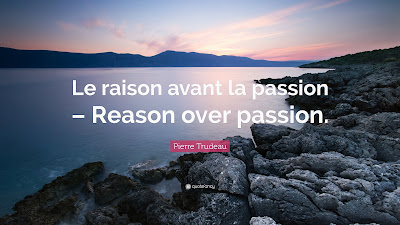 It’s not just that the price of apples and oranges is up well over six per cent and the cost of a fridge is almost 14 per cent higher than a year ago.

It’s that prices across the board are stubbornly high, wages are creeping up too, and now everyone is behaving as though too-high inflation will be here for the long haul.

Year over year, inflation was 4.8 per cent in December, the fastest pace for rising prices since September 1991, Statistics Canada reported Wednesday. Cars, home insurance, food and gasoline were what people noticed the most, although compared to November, gas prices were down.

Justin Trudeau didn't create the problem. And there's not much he can do about it -- for the moment:

The reasons? Mainly bad weather and supply chain dysfunctions, Statistics Canada said. For months now, most of the world has been struggling to deal with bottlenecks in supply chains that have been gummed up by pandemic restrictions and unpredictable surges in demand.

At this moment,  however, Trudeau has to do something about managing expectations:

The Bank of Canada noted that employers and business owners were overwhelmingly thinking inflationary pressure is here to stay for a while.

The central bank’s quarterly survey of businesses showed that two-thirds of them believe inflation will stick above three per cent for the next two years. And 71 per cent believe they’ll be raising wages some time soon in order to deal with labour shortages and rising prices.

Those numbers are really high, and they suggest to economists that there’s a risk of an inflationary spiral. Higher wages feed more spending, which feeds higher prices.

COVID has made it hard to manage expectations. There's always a new variant around the corner. And, with each new variant, people get more and more cynical. Couple that with the flood of each new conspiracy theory, and any leader walks a tightrope.

One hopes that Justin remembers his father's motto: Reason Over Passion.

Email ThisBlogThis!Share to TwitterShare to FacebookShare to Pinterest
Labels: Inflation In Canada

As conventional economists say. Brought to you by the people who brought you the Crash of 2008. It may depend on where the wage increases are concentrated.


Have a look at the discussion of increasing the minimum wage about halfway down the article were Card's results are discussed. The worldly turn

Neo-Classical Economists like Milton Friedman believed that the laws of economics were like the laws in the physical sciences, jrk. That was a huge mistake. Economics is a social science, not a physical science.

Wages have been stagnant for decades. Public services have been privatized or (in cases like post-secondary education and public transit) been allowed to charge their users higher and higher fees. Governments invented trillions of dollars simply to maintain the "values" on the financial markets. Private banks routinely vacuum up tens of billions of dollars from the real economy every year. Wealth and wages at the top of the social order have exploded. Corporations have used this supply-chain crisis to take profits.

But now that ordinary people are well sick of getting exploited, lied to, abused, and devalued (all made blatantly clear by the pandemic), some neo-liberal mediocrity is led out to blame this long-overdue push for wage justice as fuelling inflation.

The shameless stupidity of it all.

Economics is a social science,

I have a jaundiced view of a lot of economics, especially Neo-classical economics. I am not so sure we have a social science as much as a set of beliefs, a bit like Jungian Psychology.

If the facts don't match the theory, obviously the facts are wrong.

At the height of the Silicon Valley boom when people like Gates and Jobs were practically destroying IBM I had an economics professor assure me that a monopoly was the best organization to encourage innovation. Mind, even John Maynard Keyes said this.

@ twap
I am not so sure we can even say wages have been stagnate. I think I have seen some figures that suggest they have retrogressed in constant dollar terms. Dougie is doing his best teo help the process though I am not sure he is smart enough to realize what he is doing.

There has been a tendency in recent decades for some economists to act like theologians, jrk.