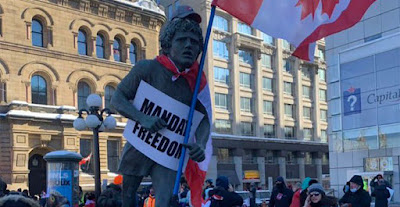 The protesters claim they want "freedom." But, Michael Harris writes:

What freedom is it that they are celebrating? Essentially, the freedom to disrupt and endanger the vast majority of their fellow citizens who know the difference between a public health crisis and a phoney political pose.

The overwhelming majority of Canadians favour vaccine mandates and believe that the unvaccinated are putting other people in peril. That’s why every party in the last federal election in Canada, with the exception of Maxime Bernier’s Peoples Party, stood for some form of vaccination compliance to help fight COVID-19.

The drivers in those trucks, allegedly hundreds of them, will no doubt turn Ottawa into a hot mess for as many days as they can. They have already disrupted the work of the 90 per cent of truckers who are vaccinated and just want to get on with the job; just as the unvaccinated are driving a pandemic that has killed thousands of people, and worn out a sizeable number of nurses and doctors in this country and in others.

This inane convoy should remind everyone of something—the idiots who interfered with health-care workers by conducting their ignorant anti-vaccine, anti-masking protests outside hospitals—even when it meant endangering patients. Some even surrounded the homes of those medical officers responsible for setting the restrictions to save lives from COVID-19.

There is an analogue for these folks:

that jackal-pack of Republican members of Congress and Senators who have also formed a tyranny of the minority by endorsing Trump’s Big Lie that the 2020 election was stolen from him.

Those people, wittingly or unwittingly, came close to igniting a political coup in the United States last January. How crazy has the GOP become? Former House speaker Newt Gingrich has called for the jailing of those sitting on the Congressional committee investigating the insurrection at the Capitol. Newt could have been mayor of Salem when the big thing was burning witches.

One young woman on Parliament Hill proudly displayed her Trump flag. And, like Trump, the convoy offers a free pass to crazies:

The Freedom Convoy will bring out every chocolate-encrusted nut-bar in the country. Some of the worst elements in this disgraceful faux protest have made clear that they would like to essentially dissolve government. They are not patriots or champions of human rights. They are democracy-wreckers and spreaders of lies and disease. They are the tail-gate trying to wag the truck.

There are many words that describe them, But I am struck -- horrified -- by their ignorance:

Tired of the pandemic guys? Isn’t everyone? But the way to beat it isn’t turning a pandemic into a constitutional rights issue. The idiot fringe doesn’t have the right to issue death warrants to people who abide by the rules.

The United States has strict rules about foreigners entering their country during COVID-19. The Department of Homeland Security started with mandating that air travellers coming into the country had to be vaccinated. Then it extended that requirement to land crossings. So now, every Canadian who wants to cross into the U.S. must show proof of vaccination. Why should anyone be opposed to Canada following the same policy for the same reason—public safety?

They claim that they can "take over the government." It doesn't work that way. And, if it did, this enraged ignorant minority wouldn't like the place they called their own.

Email ThisBlogThis!Share to TwitterShare to FacebookShare to Pinterest
Labels: The Trucker Protest

As expected, all of the ignorant politicians who endorsed this crusade of the crazies, are tripping over each other to walk it back. Most notably, Kenney and O'Toole; laughably, Kenney issued a number of tweets last night denouncing those who somehow "tainted" this despicable act of attempted tyranny. Missing of course is Doug Ford, whose daughter is out there front and centre, and we all know, he fully endorses all of this anyway. Now, police need to do there job and start arresting the hooligans and others ticketed and towed into a compound. Besides the money behind this should be able to help them out... Oh wait... they're on their own much like the stupid morons who invaded the US capitol last January. BC Waterboy

The Ottawa Police Department says that security is costing $800,000 a day. The protesters have $9 million. That will help cover the cost of this lunacy, waterboy.

There was a time when conservative leaders stayed clear of the lunatic fringe - guys like Ernst Zundel and Paul Fromm. Preston Manning got more junior guys like Stephen Harper to deal with them quietly. This gave Manning the plausible deniability he needed if confronted by the media.

Now, leaders like O'Toole and Kenney offer to talk to the loons, and leadership-hopeful Poilievre and former leader Scheer are out-and-proud supporters. This ain't Mulroney's Conservative party.

No, it's not, Cap. I heard someone suggest that it's time for the party to split in two again. But I'm not sure that there are any Progressive Conservatives left.

"This ain't Mulroney's Conservative party". I dare say that it is not. I don't quite get the point made in the comparison. The Party with "Muldoon" went "progressively" downhill with the brown paper bags of cash and Gucci shoes. This present fiasco is the culmination of many previous failings. The list of perps is long, Brian, Preston, Stockwell, Stephen, Peter, Andrew and Erin. Have I missed anyone. The conservative party is F.U.B.A.R.

Horrific nothing but. Sam

Mulroney's failings were huge, zoombats. But he was able to make wise decisions -- such as his appointment of Stephen Lewis to the UN. The present party has no redeeming qualities.

This is an interesting situation in Ottawa. By today, Feb 1, I think it is clear that there will be some sort of confrontation and it would be better for the govt and the rest of Canada if the govt defined the time and nature of this confrontation.

I also think it is clear that the police will do as little as possible. We are told the police are doing fine because there have been no deaths, injuries or riots so far. That is a low bar indeed. If the building doesn't fall down, does the architect think he did a great job?

People are greatly underestimating the gravity of this situation. I have heard these people have weapons and more are being moved into the neighborhood. I don't know if they mean shotguns or nuclear bombs but even shotguns can cause a lot of damage. It seems only too believable that some of these people are armed. The police seem terrified of them for some reason. And yet the local elementary school is open today!

I hear some of the support for this Canadian January 6 comes from south of the border. I hope the govt is approaching the Americans about this. Are we some sort of American experiment on how to take over a govt successfully, sort of a test model? If some jerk tells you they are a jerk, believe them. If someone is talking about violently overthrowing your govt, believe that they are serious. Trump is praising the Canadian truckers at some rally? He barely knows Canada exists most of the time.

He doesn't know Canada exits, ffd. But, unfortunately, he inspires some Canadians.