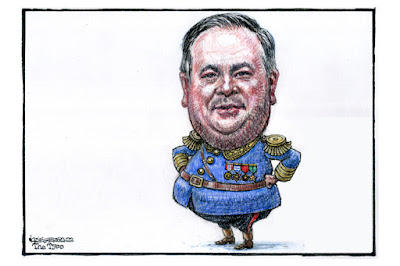 Taylor Lambert illustrates how Jason Kenney deals with his enemies:

When Jesse Drwiega won the Queen’s Golden Jubilee Award for Performing and Visual Arts in 2020, he was thrilled. The prestigious honour provided the 25-year-old actor, singer and dancer from Red Deer a $5,000 scholarship as he prepared to pursue his master’s in theatre studies.

Drwiega quickly realized what was going on.

A few days before, he’d received a call from an Alberta government official who’d asked him to re-record his video. Specifically, would Drwiega drop his brief mention of being disappointed with recent cuts to arts funding? The lieutenant-governor was going to be in attendance, and the government would prefer such views be deleted.

Drwiega had said no. He believed he had a right to respectfully express an opinion — especially given the ceremony was dedicated to students in the arts.

It had made him mad to have to stand his ground. And now, upon seeing himself all but erased from the event, anger gave way to shock.

Jason Kenney is involved in a full-throated attempt to erase reality:

This is a government that established the Canadian Energy Centre, better known as the “energy war room,” a propaganda machine for the fossil fuel industry.

It launched a public inquiry into foreign funding of environmental groups and industry critics, alleging a vast and probably criminal conspiracy that never was unearthed.

It unilaterally closed the office of the election commissioner while it was investigating Kenney’s victory in the 2017 UCP leadership race.

It introduced multiple pieces of legislation that experts say may violate the Charter of Rights and Freedoms, including laws empowering cabinet to make protesting illegal in arbitrary locations or letting people purchase memberships in political parties in someone else’s name without their permission or knowledge.

With an eye to the future, Kenney is radically reforming basic lessons taught to children, while dismissing experts who decry the new curriculum and undercutting the corps of educators who might resist such efforts.

It's conservative cancel culture at work. And one of Kenney's "issues managers" is none other than Ben Harper, son of Stephen. Young Ben pulls down a cool six figures for his work, which he somehow fits in with his online masters studies in economics at Columbia. Those Harper dads sure manage to grease the wheels for their sons, didn't young Stephen get his start in the Imperial Oil mail room thanks to dear old dad? Salt of the earth, these Harpers, common clay of the new West.

Just the salt of the earth, Cap. It's worth remembering, though, that it was salt that poisoned the fields around Carthage.

It's not just their deeds, it's that, today, they're bold enough to do it all in the open. No skulking in the cloakroom. Mitch and his lunatic crew in Congress have clearly set a bad example for Kenney.

They're shameless, Mound -- incapable of blushing.

so in commemoration of the resurgence of the atomic doomsday clock
and the right to ask for ordinance on my own position
I give you Ellen Ripley from Aliens
“I say we take off and nuke the entire site from orbit. It’s the only way to be sure.”

@ lungta
Much as I deplore violence could we, maybe, do Toronto while the crew is at it?

Oy! jrkrideau, calm down and call off the Jewish space lasers. If you nuke the 6, how are you going to keep SE Ontario's jails open? You might want to think things through before you lose your major employer.

Alberta is full of Kenneyism. He is pushing hard to establish an Alberta Police Force while ousting the RCMP. The following https//globalnews.ca. Alberta traffic courts challenge. Thing is in the southern part of Alberta, namely Medicine Hat, is where most of the unrest against the Federal Goverment is taking place. For example, Alberta sends all this money for equalization directly to Quebec. Someone needs to say this out loud…that area is a little Germany. Anyong

Let's see if others agree with you, Anyong.

No…no will say anything Owen. Anyong

@ Anyong- agreed
Albertans have been particularly ignorant as to how equalization works.
It is the local conservative promoted myth to unify them it seems.
As to the Germany comparison
The view from my porch is
Medicine Hats conservatives
think pretty much like all Alberta conservatives
and all conservatives across Canada
self centered , full of grievances and totally lacking any empathy on any issue unless it is one of their own involved

Uh, I was counting on Ottawa but you may be right. I don't want to cause a recession. Mea culpa.