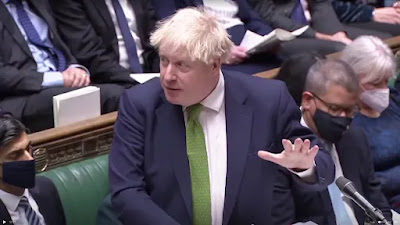 Boris Johnson is in trouble. Andrew Mackasill and Guy Faulconbridge report that:

Johnson has repeatedly apologized for the parties and said that he was unaware of many of them. However, he attended what he said he thought was a work event on May 20, 2020 which revellers had been told to “bring their own booze”.

As many as 20 Conservative lawmakers who won their seats at the last national election in 2019 plan to submit letters of no confidence in Johnson, the Telegraph reported. A handful of others have already said they had written such letters.

“Group of 2019 MPs to submit letters to try to hit threshold of 54 to trigger a contest,” BBC Political Editor Laura Kuenssberg said on Twitter. “They might hit 54.”

Johnson has always been an embarrassment. But, these days, it's one misstep after another:

Johnson on Tuesday denied an accusation by his former adviser that he had lied to parliament about a lockdown party, saying nobody had warned him the “bring your own booze” gathering might contravene COVID-19 rules.

He sidestepped questions about whether he would resign if proven he misled parliament, saying only that he wanted to wait for the outcome of an internal inquiry.

Opposition leaders have accused Johnson of being a serial liar and called on him to step down.

Downing Street lockdown parties – some held when ordinary people could not bid farewell in person to dying relatives – have undermined Johnson’s authority.

His own former spokeswoman resigned after she was captured laughing and joking on camera about how to cast a party if asked about it by reporters.

Such was the revelry in Downing Street at one event that staff went to a nearby supermarket to buy a suitcase of alcohol, spilled wine on carpets, and broke a swing used by the prime minister’s young son.

The Mirror said staff had even bought a wine fridge for Friday gatherings, events that were regularly observed by Johnson as he walked to his apartment in the building.

It won't be long before the press will be referring to Boris as "Nero."

Ah, The Mirror. I remember someone saying if the Mirror said the sun rose in the east, they would go outside and check.

Given it is Boris and his motley crew of incompetent kleptomanics I think I believe the report but I am always a bit leery of Daily Mirror stories. It certainly in keeping with everything we know about Nero ^H^H^H Boris.

Out of the mouths of babes, Cap.

Like you, jrk, I'm leary of what appears in the British tabloids. But, let's face it, Johnson gives them a lot to work with.