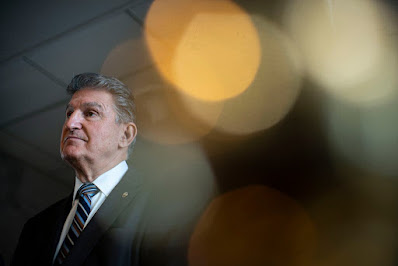 The filibuster is alive and well. And Joe Manchin has cited James Madison in his argument to keep it. James Bouie writes:

“Allowing one party to exert complete control in the Senate with only a simple majority will only pour fuel on the fire of political whiplash and dysfunction that is tearing this nation apart,” he said. “Contrary to what some have said, protecting the role of the minority — Democrat or Republican — has protected us from the volatile political swings that we have endured over the last 233 years.”

It's interesting to hear Manchin cite one of the authors of the American Constitution to defend something that was never in the constitution. Madison wrote that the Senate had two purposes:

At no point in this discussion was there any talk of a filibuster (a word not yet in common use) or any principle of unlimited debate. Madison’s point was that the structure of the Senate itself — its long terms of office, indirect method of election and staggered times for choosing members — would do the work in question. “A necessary fence against this danger would be to select a portion of enlightened citizens, whose limited number and firmness might seasonably interpose against impetuous counsels.”

Here’s where things get a little complicated. When Manchin and other filibuster defenders speak of protecting the “minority” in Congress, they mean a partisan minority. “Democrat or Republican,” as he said. But no one in Philadelphia had any idea of political parties, much less a partisan minority. They didn’t exist and none of the framers thought they would.

When Madison speaks of a “minority” in the context of the Senate, he means an economic interest, not an organized political faction. “In all civilized Countries,” he says, “the people fall into different classes having a real or supposed difference of interests. There will be creditors & debtors, farmers, merchants & manufacturers. There will be particularly the distinction of rich & poor.”

The Republican Party is a clear partisan minority. And it's doing everything it can to entrench minority rule. Like a lot of Americans, Manchin is ignorant of his country's history.

Email ThisBlogThis!Share to TwitterShare to FacebookShare to Pinterest
Labels: The American Filibuster

As Gore Vidal once quipped, "Were the United States of Amnesia, we learn nothing because we remember nothing."

What's never mentioned is that although seats are tight in the senate, Democrats have a majority there, in the house and in the White House. They won the popular vote and the Electoral College vote as well. The American electorate quite clearly chose the Democratic agenda that is now being stymied by the filibuster.

And that's why the same stupid mistakes keep recurring, Cap.

The Republicans know they don't have the votes to support their agenda, rumley. That is why they're working so hard to establish minority rule.

In the hands of today's radical right, the Founding Fathers have achieved a utility similar to how Christian funamentalists abuse the Old Testament to justify religious extremism. You cherry pick where you can, twist where you must and ignore most of it because it contradicts you.

Your analogy is quite apt, Mound. In both cases, the Radical Right and Christian evangelicals assume that God is on their side -- without paying close attention to the original texts.

But no one in Philadelphia had any idea of political parties, much less a partisan minority.

James Bouie needs to check his history. Any one of the attendees who had been to Britain could not have failed to noticu]e that the Whigs and Tories were political parties.

That they feared that partisan parties would form was true. IIRC Washington worried about this.

They saw partisanship jrk, but they viewed it as primarily economic or religious not philosophical.