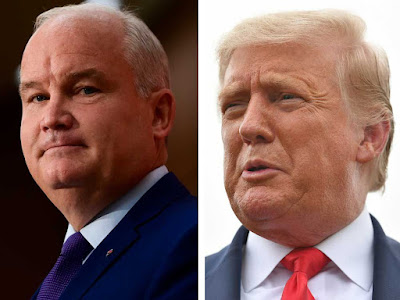 Something strange has been happening in Canadian politics since the Trump contagion to the south. Voters elect a mostly reasonable, often affable, Member of Parliament only to discover, as they watch their MP climb the leadership ladder, that they are not so reasonable, not so affable after all. That, in fact, some are drifting rapidly from the centre to the fringe, even to tinfoil-hat territory.

Consider the case of Erin O'Toole:

It is evident, most recently, with Conservative Leader Erin O’Toole, whose public appearances—tweets, videos, press conferences—have taken on an almost manic tone. One 40-second video has him bouncing around in front of the Parliament Buildings in -23 weather—“-37 in Yellowknife!”—accusing Liberal Environment Minister Steven Guilbeault of threatening to shut down Canada’s energy sector in 18 months, leaving us all freezing in the dark.

First, Guilbeault could never achieve such a coup even if he tried. Governments move too slowly. Second, even the most ardent environmentalists acknowledge that renewables are not ready to replace fossil fuels that quickly. But, more important, OToole’s claim is not true—and he knew when he said it that it wasn’t true, as The Toronto Star’s Althia Raj underscores in a recent column.

What Guilbeault has vowed to do—elaborating on an international commitment first endorsed by Stephen Harper in 2009—is end federal subsidies to fossil fuel companies by 2023. It’s a tall order, but it is no sneak attack: it was promised in the Liberals’ election campaign and now, at last, they are preparing to deliver. In an interview with The Narwhal, Guilbeault mentioned “eliminating fossil fuels” in a list of his government’s ambitions, an obvious error (he had spoken previously of eliminating fossil fuel *subsidies*.)

As Raj reports, O’Toole publicly acknowledged the minister “made a mistake” in a Zoom presentation, before an unusually animated O’Toole made his video, distorting Guilbeault’s intention. The Conservative leader apparently doesn’t care, because that is the way politics works these days. Hysterical exaggerations, often flatly untrue, advanced without a shred of shame or remorse.

There's more of the same coming from O'Toole:

Consider the Conservative leader’s recent condemnation of Justin Trudeau for “normalizing lockdowns” and single-handedly bungling the management of the pandemic, by failing to provide rapid tests and PPE. By now, everyone knows that lockdowns are determined by provinces and not by Ottawa— indeed, premiers are more inclined to ignore federal suggestions than embrace them.

As to rapid tests, some will recall stories a year ago of millions of rapid tests gathering dust in provincial storerooms, of premiers, like British Columbia’s John Horgan, reluctant to use them because they were seen to be not as reliable as lab-based PCR tests. In fact, as Trudeau underscored last week, his government has sourced 425 million rapid tests overall. Some 85 million were delivered to provinces before December, and the Omicron onslaught, and another 35 million last month. And, as O’Toole must surely know, another 140 million are arriving now and being distributed.

There have been, and still are, shortages in some provinces, but the problem can hardly be laid at the feet of the federal government—certainly, not entirely—as anyone following the news knows. But this distortion is of a piece with O’Toole’s incoherence on the pandemic.

He and his wife are both vaccinated, after an early bout of COVID, and he regularly urges everyone to get their shots. He supports mandatory vaccines for the Canadian Armed Forces—as a veteran and proud defender of the military—yet is ambiguous about his own caucus, playing with words to hide the fact that there are some vaccine resisters in the Conservative ranks.

O’Toole also accuses the prime minister of characterizing all vaccine resisters as “racists” and worse, which is not what Trudeau said. In fact, he and O’Toole are in agreement that some who haven’t been vaccinated may be fearful, uninformed, or unable to manoeuvre the system. Trudeau’s target is the small minority of wilful resisters and protesters, with links to far-right movements who are also anti-immigrant, anti-feminist, and anti-government.

Just what we need: a Northern Trump.

O'Toole is flailing around, desperately trying to hang onto his job. That "small minority of wilful resisters and protesters, with links to far-right movements who are also anti-immigrant, anti-feminist, and anti-government" is what O'Toole calls "the base." I expect a lot more lies and exaggerations from him in the weeks ahead.

Are you taking bets, Cap, on how long it will be before his party shows him the door?

Just read a Tyee piece this morning on "Kenneyism". Much the same as what you just described. Must be a Consevative trait.

“Are you taking bets,” Now there is a question Owen….Anyong

Oh, I believe it is, Muttsy. And the drift into the palpably false grows worse.

It's been a question ever since O'Toole came in second, Anyong.

On the anniversary of the Capitol Hill insurrection, Lawrence Martin wrote that some six million Canadians support Donald Trump or some form of Trumpism.

"The Trump appeal lies primarily in the Prairie provinces. Among the many reasons for his support, said Abacus Data chairman Bruce Anderson in an interview, is his ransacking of political correctness. There’s a good-sized market for it, “especially among those who harbour resentment towards minorities, women, immigrants.”

"Like Mr. Trump, many of his Canadian supporters tend to be angry and venomous. Being very vocal, they have a disproportionately large presence on social media platforms, where they spew their bile while often hiding behind pseudonyms, too cowardly to reveal their identities."

"Ekos Research president Frank Graves, who has done extensive research on right-wing populism in Canada, said in an interview that the Trumpians tend to be under the age of 50, working class, male, less educated and located mainly outside urban cores.

'“My view is that the same forces that produced the Trump presidency in the U.S. are at work in Canada, albeit on a smaller scale.” Trump apostles debase the national dialogue. Their effect, he said, is corrosive on Canadian values, unity, institutions."

The hotbed of Trump worshipers is also the Tory heartland, the Prairie provinces. It is there that O'Toole has to vie with Bernier for those barrel-bottom votes. If he fails to deliver, he's out and he knows it.

Instead of fighting this cross-border contagion, proud patriot O'Toole focuses on appeasing it even if he stops short of endorsing it. This is a movement that captured the GOP. Why would its prospects be worse with the CPC?

I have my own personal ‘rule book’ Owen & it’s partly the fault of Social Media, mainly Twitter. Twitter is a dynamic & almost instantaneous wild n wooly media environment.. a rough n tumble field of play, not for the faint of heart or ‘the gullies’ and ‘marks’ Mound often mentions.. as does Lorne at his Indy site. But my rules maintain I must be honest & non partisan - but I can be sensationally blunt, even mean spirited.. neither of which violates ‘my Twitter code’ & a little barnyard blarney to confuse drones,trolls, bots etc is de rigeur

Trumpism could never have reached its current state of rancid deception without Twitter. And as Canadian trumpistas have realized.. Twitter / Social Media has essentially left Mainstream Media in its dust.. Note I do not include Indy Blogging as passé.. quite the obvious in my view

The list of Deceivers, Born Liars, Fabricators, Manipulators, Panderers is astonishing, as is their ‘Parasitic Product’ ie The Grift. I try to imagine the unimaginable - Erin O’Toole as Prime Minister with dear Rebecca by his side.. or even more hideous.. Jason Kenney (not by his side of course.. but as PM) and I suffer instant system overload, zapping & snapping circuits explode inside me. Yet I cannot deny for a moment that ‘conservatives’ across Canada YEARN for such a nightmare.

It’s my thought that not all ‘conservatives’ actually admire Trump.. but the insane reckless & ignorant environment he fosters. Thus follows the current partisan ideology that props up the various ‘conservative’ parties.. which should surely include The BC NDP & the previous ‘liberal’ Party of Christy Clark. Justin Trudeau’s Liberal Party seems more the ‘lesser of evils’ than sweethearts of the political rodeos

PS - regards to Lorne & Mound.. but I remain locked out of complementing them via comment.. re their fine Indy Canadian work

How long until O'Toole gets the boot? Well, Owen, the next leadership convention is scheduled for August 2023, and so far the national council is sticking by O'Toole. But most minority governments last less than two years, with the average being less than a year and a half. So my money is on Trudeau calling another snap election before August 2023 and forcing the Cons to run under O'Toole's banner again.

Thanks for the link, Mound. O'Toole, like many Republican leaders, knows better. But that doesn't matter.

Hopefully, they'll your comment, sal, and be able to change that situation.

That sounds quite plausible, Cap, As Brian Mulroney used to say, "Ya dance with the one that brung ya."

Re Trumpism; there is hope..

The natives are restless..

At least some people are getting tired of the pathetic, stupid old man, TB. Thanks for the links.