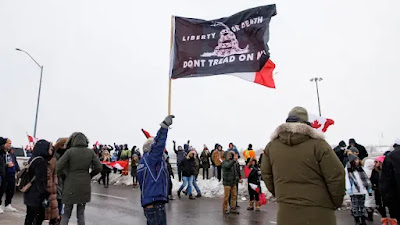 The truckers will arrive in Ottawa this evening. Along the way, they've picked up quite a lot of money. The CBC reports that there have been a lot of anonymous donors:

At least a third of the donations to the GoFundMe campaign set up to support the convoy of trucks headed to Ottawa to protest vaccine mandates came from anonymous sources or were attributed to fake names, according to an analysis by CBC News.

While thousands of Canadians and Canadian businesses have dipped into their pockets to fund the cause, thousands of other donors to the campaign are listed simply as "Anonymous."

While the campaign is fundraising for a Canadian political protest, some donations appear to have come from outside of Canada, based on comments left by donors on GoFundMe.

Some donations were made using the names of other people. Among the most common donor names listed on the GoFundMe site are Justin Trudeau, Sophie Trudeau and Theresa Tam — the name of Canada's chief public health officer.

It will not be a peaceful weekend in Ottawa:

Ottawa police are asking residents not to travel if they can avoid it this weekend, with "major traffic disruptions" expected in the downtown core.

"If you have appointments, children in activities, are expecting food deliveries, please be prepared to adjust your plans," police tweeted.

They say they'll do everything they "possibly can" to keep emergency lanes open and access to hospitals and health-care facilities intact.

Ottawa Public Health has closed its vaccine clinics at the University of Ottawa from Friday through Sunday and its Lowertown Neighbourhood Vaccine Hub will be closed on Friday.

The brain dead walk -- and drive trucks -- among us.

Email ThisBlogThis!Share to TwitterShare to FacebookShare to Pinterest
Labels: The Trucker Protest

My hope is, sanity will prevail. Life must be extremely boring for those truckers if they attempt any kind of violence at all. Anyong

It's long past due to call these idiot protests out for what they are- and what they are not. First they are in no way intended to be a peaceful protest or civil disobedience- these are thugs looking for trouble. Second, the vast majority of this country has done the right thing, even in the face of terrible public health and political advice- to end this pandemic, and those same people would support peaceful protest, but again, that's not what this is. Stupid Conservative politicians who have no clue about the working class, feign support and really, want to see the unrest. After all it is their base of support. So sick of all this, but if not covid, there will be something else for these freedom fighters to cause havoc about. BC Waterboy.

The unvaxxed go on about their right to bodily autonomy. But what happens to your bodily autonomy when you haven't been paying taxes and you get sent to jail? It's time that politicians and media pundits underline the costs to society of these cranks instead of giving them succour.

The crazies are getting crazier, Anyong.

These folks are thugs, Tim. You're right. They live for a brawl.

I talked to someone yesterday who just lost an unvaccinated member of his family to the virus, Cap. You can't fix stupid.

That's their anthem, PoV. Fools, all of them!

My former self defence instructor, a retired RSM and CWO from the Canadian Airport Regiment (he had retired before the white supremacists took over the unit and caused the murders in Somalia) used to remind us that assholes travel in packs.

And diseases flourish in packs, too, perfect.

I was reading Bruce Arthur's column this morning, Owen. It seems those cheering on the convoy are supporting freedom. I guess that includes freedom to infect others.

Those truckers are right ! I went to the grocery store today and they were out of onion dip. What am I to do ? They had salmon, herb and garlic, herb and spice but no onion. I blame Trudeau.

Ahem. Was to read Airborne, not Airport. Damned autocorrect.

I wondered about that, perfect. Thanks for the correction.

My advice to anyone in Ottawa this weekend who might be surrounded by these clowns. Always go for the Juggler! Just passing time.

I think people should stay as far away as possible, zoombats. These folks don't deserve an audience.