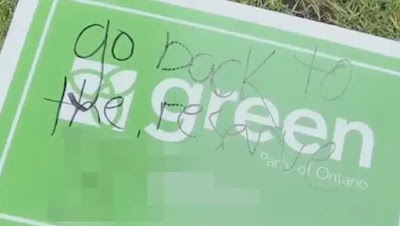 The American disease has crossed the border. It's showing up in Ontario's election. Haydn Watters writes:

Marjorie Knight used to knock on doors alone. This Ontario election, her campaign team has decided to always have her canvassing with someone else.

"I had people call the police on me because I was 'casing' homes as I was going door to door knocking," said the Cambridge NDP candidate. "You go up to somebody and they slam the door in your face and tell you that they don't deal with your kind. Not sure what kind that is."

Knight, who first ran in 2018, doesn't want to put herself at risk — she doesn't know who she may bump into while campaigning. One of her election signs was recently defaced with slurs.

"It was definitely hateful. And sadly, it's within my community," she said.

Scarborough—Guildwood Liberal candidate Mitzie Hunter has had her campaign signs vandalized too, with hateful words like Nazi and fascist. In Peterborough, federal NDP Leader Jagmeet Singh was accosted by protesters at a rally for a provincial NDP candidate. Protesters hurled vile insults and threats at him, and gave him the middle finger. (Peterborough police investigated and say there's no grounds for criminal charges.)

Krystal Brooks, Green Party candidate for Simcoe North, felt upset and hurt after finding one of her signs defaced with personal attacks. Brooks is from Rama First Nation and is a human trafficking survivor.

"On the one side, it said, 'Go back to the reserve,'" she said. "On the other side, it was a little too inappropriate to even say. But it was fairly targeted at my human trafficking background."

The OPP has been tracking this kind of behaviour:

Bill Dickson, OPP spokesperson, is noticing a shift in tone this election campaign.

"Things have changed. The climate has changed. People seem to have changed and some have blamed it on COVID," he said. "If you don't agree with a candidate, that's fine. But to target them with words that are hateful? It's just wrong."

Dickson notes that between 2020 and 2021, the OPP saw a 14 per cent increase in "threatening and inappropriate communications toward government officials." This anger and polarization was well displayed during last fall's federal election. Prime Minister Justin Trudeau even had gravel thrown at him during a campaign stop in London, Ont.

It's an ill wind that blows from the south.

Clearly, Owen, some people's relationship with democracy has changed for the worse. It would seem concern for the collective good is being forgotten, to be replaced with a childish, egocentric and reactive concentration on the self.

We are regressing, Lorne, to a place where we are ruled by our darker angels.

All of the provincial candidates mentioned are women, all are from visible minority groups, and none are running for conservative parties. I'm starting to notice a pattern here.

That pattern keeps recurring, Cap. If you're an angry white man, the Conservative Party is the place for you.

That pattern keeps recurring, Cap. If you're an angry white man, ...

Perhaps angry 'old white man" with too much time on his or her hands is more descriptive.
I am 75 years of age and wish that my self indulgent all important, care less generation go to the grave asap!
The selfishness of the baby boomers is only eclipsed by their offspring .

You're right, TB. We baby boomers have a sorry record, TB. And, unfortunately, it's not just old white men. The kid in Buffalo does not prompt a sense of hope.