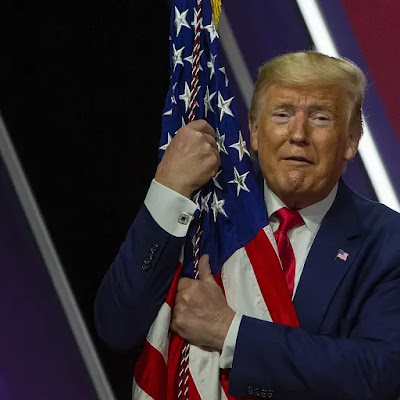 The fall of Jason Kenney has brought forth nary a word from any of the contenders for the leadership of the federal Conservative Party. Susan Delacourt writes:

No thanks or goodbyes, no public comment on the Alberta premier who was once seen as a leading light for modern-day conservatism in Canada.

Pierre Poilievre and Patrick Brown, who served in federal government with Kenney during the Stephen Harper years, took shots against each other instead. Former Quebec premier Jean Charest, who knows a thing or two about leading and losing in provincial politics, had nothing to say about Kenney either.

Maybe these would-be leaders were worried about offending one side or the other in the province that is also the heartland for the party. The 51-49 per cent vote in the Kenney leadership review is a vivid, perfect picture of the sharply divided landscape on the right in Alberta — if not Canada at large.

Or maybe, more correctly, conservative leadership aspirants are seeing what happened to Kenney as a warning.

Conservatives hate Justin Trudeau. But they are taking down their own people:

For all of the efforts conservatives are making to harness the rampant rage out there toward Justin Trudeau — embodied in the convoy protests — it’s conservative leaders who keep falling. It was federal leader Erin O’Toole a few months ago; Jason Kenney this week. Trudeau is still standing, by the way.

Probably the best post-Kenney commentary came from Sean Speer, former senior economic adviser to Harper, now an editor at large with The Hub. Speer looked at what happened to Kenney on Wednesday night, sat down at the keyboard, and produced what he titled as a lament for the current state of conservatism.

“There’s a small yet spirited minority of grassroot conservatives who’ve come to define their politics in solely oppositional terms,” Speer wrote. “The result is a siege mentality that’s more reactionary than it is conservative. These people aren’t interested in incremental policy reforms. They’re looking for a fight. They want to toss a hand grenade into the cathedral of our mainstream institutions.”

I’ve been saying something like this since the convoy protests were raging in Ottawa this winter. If it was Poilievre, not Trudeau as prime minister, it would be the Ottawa MP’s name flying on all those “F— Trudeau” flags.

The target of this free-ranging anger isn’t partisan; it’s institutional. The angriest, darkest strain of those protests is nihilist, not at all conservative.

Another insight from Speer: “The forces that have led to Kenney’s departure aren’t interested in or capable of making conservatism relevant to ordinary working people. They have nothing of an affirmative agenda. They are agents of outrage and that’s it.”

The same thing happened south of the border. And we've seen where that has led.

Email ThisBlogThis!Share to TwitterShare to FacebookShare to Pinterest
Labels: Reaction To Kenney's Resignation

The fact that extremism is quickly becoming the default position of Conservatives is nothing to cheer about. It only does long-lasting damage to our democracy and likely ensures that the Liberals will be able to proceed unchecked far into the future, Owen.

Anyone who's watched Fox or spent any time on Rebel or a Con's Facebook feed knows that Cons are being fed a steady diet of lies and half-truths crafted to stoke rage. This is also the Kenney and Poilievre approach to political leadership - keep the base enraged at Trudeau. The result is some of Canada's stupidest people occupying Ottawa because they're tired of doing anything to avoid additional Covid casualties.

But, as Delacourt notes, Trudeau is still standing. As a shrewd American observer of the human condition once said, "Anger is an acid that can do more harm to the vessel in which it is stored than on anything on which it is poured."

I stumbled across an op-ed in The Atlantic describing how the political virus that attacks democracy had travelled from Washington to Canberra.

Democracy is under attack - from within.

That's true, Cap. Those who spew hate eventually do themselves in.

There is a huge distance -- and a few oceans -- between Australia and the United States, Mound. But the virus of Trumpism seems to leap over all barriers.