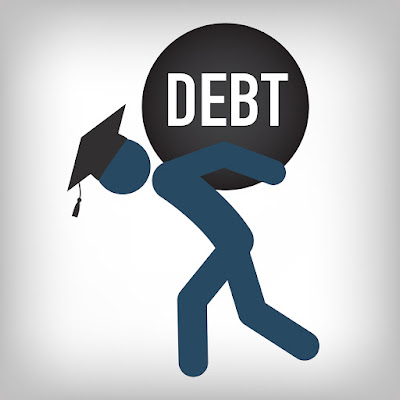 In both Canada and the United States, proposals are being floated to deal with the problem of student debt. Paul Krugman writes:

What I think I do know is that much of the backlash to proposals for student debt relief is based on a false premise: the belief that Americans who have gone to college are, in general, members of the economic elite.

The falsity of this proposition is obvious for those who were exploited by predatory for-profit institutions that encouraged them to go into debt to get more or less worthless credentials. The same applies to those who took on educational debt but never managed to get a degree — not a small group. In fact, around 40 percent of student loan borrowers never finish their education.

But even among those who make it through, a college degree is hardly a guarantee of economic success. And I’m not sure how widely that reality is understood.

What is widely understood is that America has become a far more unequal society over the past 40 years or so. The nature of rising inequality, however, isn’t as broadly known. I keep encountering seemingly well-informed people who believe that we’re mainly looking at a widening gap between the college-educated and everyone else.

When governments stopped issuing grants to students and started providing loans to them, the assumption was that their lifetime earnings would far outpace their debt. They could, it was said, easily repay their loans.

But the economy changed. University students graduated into the gig economy, where a regular paycheque was far from guaranteed. The result has been that students graduate from university with the equivalent of a home mortgage on their backs. That's quite an achievement by the age of 22. Recent statistics indicate that newly graduated doctors owe a quarter of a million dollars as they begin to set up a practice.

In Canada -- for the past two years and until March 2023 -- the federal government has stopped including interest payments on that debt. But there is so much more that could be done.

Email ThisBlogThis!Share to TwitterShare to FacebookShare to Pinterest
Labels: Students In Lifetime Poverty

The feds may have stopped collecting interest payments on student debt during the pandemic, but the interest remains payable at some point. That benefits the average bachelor's grad somewhat, but most physicians, dentists, chiropractors, vets, lawyers and accountants have to take out bank loans to cover their extra-high tuition fees. The domestic tuition for a professional degree can easily exceed $100,000 and interest on those loans was collected regardless.

But there are two scams that can drive tuition into the stratosphere. The first is inflated entry requirements for professional programs; the second is places held for international students. When you went to university, Owen, most students entered medical, dental or law school after two years of undergrad. Now, those schools require a bachelor degree at least, with many students completing masters or PhDs before being admitted. This both increases tuition costs and reduces the number of years a professional will work at the presumably higher earnings. European and Asian students enter professional programs directly from secondary school and you won't convince me that they're less educated or capable. We simply waste students' time and money.

The other scam is saving seats in professional programs for international students because the super-high fees they're charged help fund the place. Naturally, this denies seats to domestic students, who then turn to international schools and pay their astronomical fees. A medical degree from a US, European or even a Caribbean school can easily cost $500,000, and saddles the new grad with a phenomenal debt.

Our higher education system is broken and needs a complete rethink. It's current purpose is to force debt-peonage onto people, which in turn lowers their ability and willingness to take potentially fulfilling jobs that don't pay as well. We won't solve the shortage of family physicians without addressing the obscene cost of higher education.

Exactly. Cap. One other wrinkle. We live in a rural area that used to subsist on farming. It's now become what a neighbour of mine calls "a rich man's paradise." I'm told that newly graduated doctors -- with their debt load -- can't afford to live here.

1. Education should be free
2. If you forgive those in "student debt" then be fair and repay with interest those that did repay "student debt" usually at a severe sacrifice ( i.e. succumbing to bankruptcy from a different debt instead)


The other scam is saving seats in professional programs for international students because the super-high fees they're charged help fund the place. Naturally, this denies seats to domestic students, who then turn to international schools and pay their astronomical fees. A medical degree from a US, European or even a Caribbean school can easily cost $500,000, and saddles the new grad with a phenomenal debt.
I couldn't agree with Cap more. My daughter(32) has an excellent grade point average and a degree in Dietetics/nutrition from Macgill. Works at Montreal General and in fluently bilingual. She wants to pursue a Masters in Food Science at UofT or UBC but cannot get accepted. It has been common knowledge that many Universities are reliant on Foreign students paying more than double the tuition. As Cap mentioned she is having to study at University of Illinois where they also rely on foreign fees.It bis truly messed up.

Too excellent suggestions, lungta. Education is an investment in the future that benefits society as a whole.

I agree, zoombats. In effect, public educational institutions are being turned into for-profit businesses.

In effect, public educational institutions are being turned into for-profit businesses

I am now living in my Alma Mater's town. A few years ago I was in the Phys-Ed complex and was horrified (shocked and appalled?) to see the main reception desk had a huge sign over it reading Customer Service. I am still disgusted.

I think that Australia may have gone even further. At the onset of Covid-19 Australia shut its borders to just about everyone. Since this seems to have been during the academic holidays, many foreign students were caught out-of-country. There were worries about the financial viability of major universities.

In our case and in Australia's we can argue that this is simply a matter of government policies in large part. University administrators are driven to find alternative sources of funding when the various governments fail to maintain funding levels

Point well taken, jrk. The surge in foreign students is driven by the funding cuts governments have imposed on these institutions.

I see that I wrote "further" rather than "farther" in my post above. It sounds more appropriate but why?

They're basically interchangeable, jrk. Some say that father is for literal distance and further is for metaphorical distance.