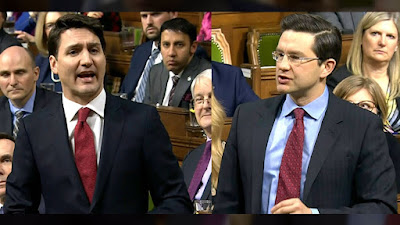 By this time in his political career, Michael Harris writes, Justin Trudeau might have been plotting his exit. But Pierre Poilievre has given him a reason to stick around for awhile:

Not many people in federal politics win the PM’s job and a majority government on their first try. Even fewer win three consecutive federal elections, albeit by lesser margins, in the age of drive-by-smear politics.

Few besides Trudeau have inherited—and navigated—a deadly pandemic that stole lives, liberties, and economies. Trudeau has also answered the international bell in two staggering tragedies, the Syrian War, and now Putin’s sick assault on Ukraine. Canada was there with both humanitarian and military assistance.

It hasn't been all sweetness and light:

Trudeau’s record on climate change has been mixed. But while slow to end subsidies to the fossil fuel industry, setting carbon emission targets more aspirational than real, and actually buying a rickety pipeline, he did give Canada a meaningful carbon tax. He also gave the country a piece of environmental assessment legislation that could be a game-changer: that is, if the Alberta Appeals Court decision striking down Bill C-69 is itself reversed on appeal by a higher court.

His much-vaunted feminism was put to the test and failed during the SNC-Lavalin scandal, and the government’s handling of harassment of women in the Canadian military.

Most prime ministers have mixed records and those records eventually catch up with them. But Pierre Poilievre presents a problem for the Conservatives:

The political odds right now favour Pierre Poilievre to become the next Conservative leader in September, another ex-Harper acolyte who has no chance of becoming prime minister.

“Freedom” might pass for public policy at a biker rally, or in a non-representative trucker’s convoy. It will be merely comical during a federal election campaign. Canadians are cosmopolitan citizens of the planet. They know that few countries in the world can boast the freedoms, social safety net, and opportunities that Canada does.

Who could take a candidate seriously for PM who argued against mandates that saved people’s lives during the pandemic, including crucially important vaccines?

This is the same man who championed the right of fringe-truckers to tie up the national capital for weeks over COVID-mandates, but who wanted First Nations protestors immediately kicked off the railway tracks to guarantee the public’s right to move.

This is the MP who as a Harper cabinet minister endorsed a “snitch line” so neighbour could rat out neighbour over so-called “barbaric practices.” He was also the author of the laughably named Fair Elections Act, which would have put a Cheshire Cat smile on the face of any Texas Republican.

Jean Charest -- another Quebec native son -- would be a much more formidable opponent for Trudeau. But it appears that, for the Conservatives, every day is Groundhog Day.

Email ThisBlogThis!Share to TwitterShare to FacebookShare to Pinterest
Labels: Trudeau And Poilievre

What to say ? It’s Michael Harris.. one our great Canadian National treasures
He reminds me a tich.. no.. a lot - of Pierre Berton - the sly humorist
& a great big dollop of Farley Mowat - the truly mischievous one

Justin is the (rather effective) front-man for the Freedland gov't.

If the Libs actually make Blood-and-Soil Freedland PM, then even Lil'PP has a chance.

Pundits who proclaim " . . . Pierre Poilievre . . . has no chance of becoming prime minister" seem to have missed what happened south of the Medicine Line. We all heard, we all knew that Trump could never win. Of course Poilievre could become Prime Minister. There is a lot of anger building. As I see it the angry will be going to the polls.

When I look at the options there is no party I could in good conscience vote for. Shall I stay home or spoil my ballot? I know people who never vote and I sympathize. Our various governments have little practice at addressing big problems.

There's a storm building. It's about time the pundits wake up.

Given present circumstances, I won't speculate on Justin's replacement, PoV.

On, there is a storm brewing, Toby. It will not be easy for whoever rides the whirlwind.

To be sure Trump and his copycats have have caused turmoil, but I doubt they have the balls to be any more than an irritant to politics as usual.

If anything they, the uneducated, will be used and misused at the whim of corporate greed; just ask Tucker Carlson!

Weasels like Carlson know how to prey on the innocent and the ordinary, TB.